Wisconsin’s 1849 abortion ban could come back in force

Back in 1849, construction began on a railroad running westward from Milwaukee. That same year,  the state’s first telegram arrived. Wisconsin also passed a law in 1849 making it a felony to perform an abortion.

In 2019, 170 years later, that law remains on the books. There have been attempts to get rid of it, but once Roe v. Wade made abortion legal nationwide in 1973, it no longer seemed a priority for pro-choice advocates.

“Abortion is health care, not a criminal act,” says Rep. Lisa Subeck (D-Madison), author of the Abortion Access Protection Act, legislation aimed at getting the 1849 law off the books, in case Roe is overturned, and codifying abortion protections. “Now it is imperative because our health care is in danger.”

Wisconsin is one of just nine states with a pre-Roe ban still on the books as conservatives in states including Alabama and Georgia push extreme abortion bans in hopes of getting Roe v. Wade in front of a friendly Supreme Court.

There is no clear indication whether or not the U.S. Supreme Court would take up Roe v. Wade, particularly during the 2020 election cycle. Even with a renewed focus on the national front, abortion laws are changing most rapidly at the state level. Wisconsin is in what NARAL Pro-Choice America labels the worst category with “severely restrictive” access to abortion.

Subeck says she talks to people frequently who do not realize the 1849 law would take effect if Roe were overturned. She says the focus on the issue has been required elsewhere as state politicians have passed bills “chipping away” at abortion access: “We’ve seen that in Wisconsin, particularly over the last eight to 10 years.” 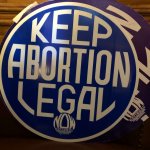 On June 21, Gov. Tony Evers vetoed four bills delivered to him with fanfare by legislative Republicans with the goal of “protecting life.” Rep. Chris Taylor (D-Madison) says the bills were written to “mislead the public with rhetoric that is not based in medical realities,” such as a bill mandating care for a fetus that survives an abortion, the so-called “born alive” bill. Others were already part of state law. In his veto messages, Evers wrote: “Politicians shouldn’t be in the business of interfering with decisions made between patients and their healthcare providers.”

Taylor has been working on reproductive healthcare issues since she was a college student. She and her sister were a part of Clinic Defenders, a group that escorted  women into clinics through lines of protesters.

She says the situation is scarier now and that the anti-choice movement is smarter in looking to install judges and politicians who are against abortion and pass laws that restrict access to such a degree that it becomes extremely onerous to have or perform an abortion. Taylor says she’s grateful to have a pro-choice governor in Evers after years of former Gov. Scott Walker signing restrictions into law. Still, she notes, Evers’ vetoes can’t wipe the 1849 law off the books.

“We were worried back when I started working on this in the late ’80s that Roe v. Wade could be overturned, and we’re closer to that now than any time since then,” Taylor says. “Our rights as women have been ravaged and it’s probably going to get worse rather than better.”

The most visible target in Wisconsin has been Planned Parenthood, which, after continued cuts to funding, has had to close clinics around the state. There are just three total clinics left providing abortion between Milwaukee and Madison and one in Sheboygan that is occasionally open.

“Reproductive health care has dwindled in the years while Scott Walker was governor,” says Mel Barnes, Planned Parenthood of Wisconsin’s director of legal advocacy and policy. She notes that providers already are subject to the laws, ethics, restrictions and other professional rules that apply to other areas of medicine. That’s on top of a very long list of restrictions that apply only to the abortion procedure. Some of these include: a requirement that women make two visits to a doctor and wait 24-hours between them; parental consent for a minor; the two visits must be with a doctor for a medication abortion; a ban after 20 weeks with no exceptions for rape, incest or a woman’s health, an ultrasound that must be shown to the patient and other extremely detailed scripted material the provider must recite. Barnes says that the scripts — which are not mandated in other medical fields — are particularly difficult for doctors because “lots of the details are not supported by the best medical evidence.”

In January, Planned Parenthood filed a lawsuit challenging three of these laws as unconstitutional:

Barnes, a lawyer who worked in a women’s health clinic before she went to law school, finds that three things often come as a shock to patients seeking an abortion. First, that most health insurance does not cover an abortion or places onerous restrictions that make even comprehensive health insurance virtually unusable. Second, that women cannot get an abortion from their own doctor.

Third is the 1849 law. Barnes agrees with Subeck and Taylor that most people in Wisconsin are unaware that this piece of antiquated legislation could outlaw abortion and turn doctors who perform them into criminals without Roe v. Wade.

Barnes views national anti-abortion extremists as having been “embolden by Trump,” into showing the true intent behind years of various restrictions. While the majority of the public supports Roe v Wade and legal abortion, Barnes notes that opponents are increasingly upfront about opposing all abortions without any exceptions for victims of rape and incest or situations where the life of the woman is in danger.

“It’s revealing to be at this place,” says Barnes. “The true intent of all these laws is now clear — and it’s an all-out ban.”

Last week Operation Save America came to Madison and Milwaukee, with a protest at the state Capitol on Thursday and visits to each legislative office to lobby for an all-out ban on abortion with no exceptions. Rev. Rusty Lee Thomas, the OSA national director, led a group around the outside of the Capitol building  displaying signs and a large truck with fetal pictures. His message focused on abortion as a “culture of death savaging our nation,” and he later blogged that as OSA “squared off at the state Capitol … Madison became the Mount Carmel showdown between good and evil in our day.”

Meanwhile inside the Capitol, Abortion Access Front held a news conference led by “Daily Show” co-founder and former head writer Lizz Winstead. YWCA Madison CEO Vanessa McDowell told the packed room, “The vision we want to see is one that empowers women by giving us control over our own bodies.”

Another speaker was Annie Williams from Oak Park, Illinois, who spent months at the Illinois Capitol as part of a group that wore red capes and bonnets dressed as the women from “The Handmaid’s Tale” whose sole responsibility was to bear children. “You can’t help but notice the similarities with what is happening today with women being reduced to just being a womb,” she said.

Williams’ tale had what she called a happy ending when Illinois passed the Reproductive Health Act signed into law on June 12 by Gov. J.B. Pritzker expanding abortion rights and eliminating an unenforced criminal ban that remained on the books.

Illinois and Wisconsin showcase opposite sides of the quickly widening gap among the states on abortion. While Wisconsin is among the most restrictive states, even with Evers vetoing the four bills in May, across the border, Illinois has moved in the opposite direction.

“This Illinois handmaid wants to applaud Gov. Evers for vetoing those sucky bills,” she said to cheers. “Illinois has become an island in the Midwest — tell your legislators to be like Illinois.” Next at the podium was One Wisconsin Now’s Analiese Eicher, who added with a nod of her head: “It’s not often I get a little jealous of Illinois.”

Restrictions on Abortion in Wisconsin

More on policies currently before the Wisconsin legislature from Wisconsin Alliance for Women’s Health are here.

Wisconsin’s 1849 abortion ban could come back in force

Without Roe standing, abortion is a felony in Wisconsin by Melanie Conklin January 24, 2022
The Wisconsin GOP’s search for ‘inappropriate’ books in… by Isiah Holmes May 31, 2022
AROUND THE U.S.: Leaders react, mobilize in states in wake… by Les Zaitz June 27, 2022