Sen. John McCain (R-AZ) was many things, and very different things to different people. His legacy is complicated, whatever your politics or your feelings towards the man and his life in public service. What is indisputable is that we didn’t always know what we would get from him. Whether you believe him worthy of his moniker “Maverick” or not, there’s just no denying he was willing to stick it to his own party from time to time, or that he had a flair for the dramatic.

One downward turn of the thumb on the floor of the United States Senate in the dead of the night protected 130 million Americans with pre-existing conditions. Lifetime caps on health insurance coverage remained banned. Americans who had gained access to health insurance, many for the first time, through the ACA wouldn’t lose their coverage.

It was astonishing. Audible gasps from the floor of the Senate chamber are rarer than rare. But one man’s thumb caused them that night. Little more than a year later, Sen.McCain was gone.

The US Senate is worse off for his absence. The American body politic is, too.

Fewer legislators are willing to put country before party. The President lacks appropriate respect for the Constitution itself, much less the standards and norms that have allowed our nation to evolve over more than two centuries.

Among the effects of our current political reality is a continuing, ongoing assault on the entire Affordable Care Act. Stymied in their efforts to roll back progress on health care legislatively, Republicans have turned to the courts. Republican governors have joined a federal lawsuit, in the hope that a conservative judge (or court) will legislate from the bench to achieve what their party could not pull off even when they had control of both houses of the legislature and the executive branch.

Make no mistake, if the latest Republican-driven lawsuit, brought by the state of Texas, is successful, the ACA will be overturned.

That means no more protections against discrimination for those with pre-existing conditions like asthma or diabetes. A return to lifetime caps. And fewer Americans with the ability to access health insurance. In short, chaos across the health care landscape, with health insurance companies back in charge.

Typically, the Department of Justice (DOJ) defends federal law in court regardless of which party holds the presidency. But the Trump Administration has refused to allow DOJ to defend any part of the law – including its protections for pre-existing conditions – in court. Instead, Democratic attorneys general from across the country, led by California AG Xavier Becerra and patient advocacy organizations, have mounted a legal defense against the Trump lawsuit.

Late last year, a federal judge in Texas ruled the Affordable Care Act unconstitutional in that state’s suit. That decision is currently under appeal in the 5th Circuit Court, which heard oral arguments beginning last month. If the U.S. Supreme Court ultimately upholds the lower court’s decision, provisions allowing children to stay on their parents’ insurance until age 26, bans on annual and lifetime limits, bans on insurance discrimination against women and older Americans, limits on out-of-pocket costs, small business tax credits, and protections for people with pre-existing conditions will be gone.

This case, Texas v. United States, makes crystal clear that the fight to protect health care is not over.

Because even if the suit fails, President Trump and his Republican allies in Congress will continue their attacks on health care. Without hope for another thumbs down vote from Sen. McCain, the American people must make their voices heard and demand that their health care be protected. Eventually, Republican politicians might even listen. 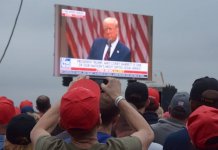 Why no one should have been surprised

Thumbs up for McCain’s thumbs down