Advocates on both sides of recent redistricting battles in Wisconsin have told the Examiner they believe that the Republican-controlled legislature might draw new, gerrymandered voting maps after the 2020 census, using a process that would avoid sending the plan to Democratic Gov. Tony Evers for his signature or veto.

Democrats and advocates for a fair map hoped that the election of a Democratic governor would prevent Republican legislators from gerrymandering Wisconsin again.

Wisconsin already has one of the most skewed voting maps in the nation, according to a federal court. Under the current map, created by the Republican legislature and signed by then-Gov. Scott Walker in 2011, Republicans were able to win a majority of seats in the state Assembly in 2012, even though Democratic candidates received more votes, overall, in that year’s Assembly races. In 2018, despite losing his re-election bid, Gov. Scott Walker carried 63 of the state’s 99 Assembly districts because of Republican gerrymandering.

Now Democrats and fair-maps advocates are worried that Republicans might make an end-run around Evers by means of a joint resolution, passing a new map through the Assembly and Senate. Because joint resolutions do not require the governor’s signature, the map could go into effect without any input from the governor.

“We believe that the legislative Republicans are already working with the Wisconsin Institute for Law and Liberty, and they are geared up to do reapportionment in 2021 by means of a joint resolution,” said attorney Lester Pines, who has challenged the constitutionality of laws enacted by the state legislature on voter I.D., abortion restrictions, executive power and other issues. The Wisconsin Supreme Court has already held that redistricting by joint resolution is unconstitutional, but the current court, dominated by Republican-backed justices, might be willing to overturn that 54-year-old precedent, Pines added. “And the Wisconsin Institute for Law and Liberty will be geared up to argue that it is constitutional.”

“I’ve heard about it,” Rick Esenberg, executive director of the Wisconsin Institute for Law and Liberty (WILL), said of the plan. WILL, a legal institute that backs conservative causes, filed a friend-of-the-court brief in the U.S. Supreme Court’s Gill v Whitford redistricting case, siding with the Republican state lawmakers who drew the current map.

WILL is not currently working with Republican legislators on the joint-resolution plan, Esenberg said: “Whether we would have anything to do with it, I can’t say.”

“It would require that precedent be overruled,” Esenberg acknowledged. But, he added, “I don’t think it’s a frivolous argument.”

And, Esenberg said, “Assuming the Democrats don’t take both houses of the legislature, which is unlikely, it’s the only way out of what is an assured impasse.”

In fact, historically the courts have drawn Wisconsin’s district maps more often than not when the parties reached an impasse.

Republicans removed a provision from Evers’ budget proposal that would have created a nonpartisan commission to draw voting districts. Now Democrats worry that the Republicans are already working behind closed doors on a joint-resolution plan.

“Yes, that’s the scenario I see,” said Rep. Gary Hebl (D-Sun Prairie). “It’s not, ‘What’s right for the state?’ It’s, ‘What’s right for me?’” Hebl added: “With gerrymandering, there’s no longer a fear of an election challenge from the other party, the only fear is of an extremist primary.”

In the early 1960s, a Republican-led legislature tried to reapportion the state’s voting districts by joint resolution, making an end-run around Democratic Gov. John Reynolds. That effort was overturned by the Wisconsin Supreme Court in the 1964 Reynolds v. Zimmerman decision. The court ruled that the legislature could not enact a reapportionment plan by joint resolution, and that the governor must be a part of the process.

For the Republicans to redistrict by joint resolution in 2021, the court would have to overturn that 54-year-old precedent. Advocates worry that the current Supreme Court might be willing to do that.

“I’ve tried to raise the alarm myself, personally, that the Democrats should be prepared for this,” said William Whitford, the retired University of Wisconsin law professor who was the lead plaintiff in the U.S. Supreme Court’s Gill v. Whitford partisan gerrymandering case.

Whitford said he has been part of conversations about the possibility of a joint-resolution end-run with Gov. Evers and other elected officials as well as progressive groups. “It’s going to take lawyers to fight it,” he said.

“In Wisconsin and a few other states, gerrymandering affects which party is in control. So the consequences are just enormous,” Whitford added.

In the Whitford case, the U.S. Supreme Court decided that the plaintiffs could not show that they were specifically harmed, and remanded the case back to district court, so they could prove “concrete and particularized injuries … that would tend to demonstrate a burden on their individual votes.”

In June, in a separate, 5-4 decision, the Court decided that federal courts have no role to play in drawing Congressional districts, leaving the issue of drawing districts to the states.

But that decision does not preclude federal courts stepping in and drawing a district map when legislators and the governor cannot agree on how to draw districts.

In fact, the federal courts have imposed district maps in Wisconsin more often than not because the parties could not agree, according to Michael Keane, senior research analyst with the Wisconsin Legislative Reference Bureau, in his definitive history, “Redistricting in Wisconsin.”

In 2011, after gaining control of both the legislature and the governor’s office, the Republicans took control of the process, drawing maps in secret with support from private attorneys.

“And they’d like to continue it, of course,” Whitford said. “Look at [Assembly Speaker] Robin Vos, he sits there like a king on the hill. He’d like another 10 years.” 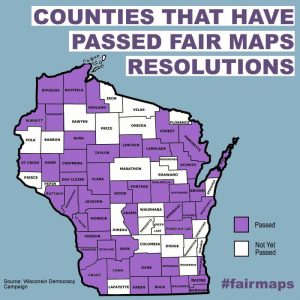 A majority of Wisconsin voters — 72% according to a recent Marquette Law School poll — said they prefer redistricting of legislative and congressional districts be done by a nonpartisan commission. That includes 63% of Republicans, 83% of Democrats and 76% of independents.

“The people of Wisconsin have a clear view that the maps should no longer be rigged,” said Sachin Chheda, director of the Fair Elections Project, which advocates for nonpartisan redistricting.

The process by which the state draws new voting maps will be a key issue in the spring Supreme Court election, said Chheda, who said he is aware of behind-the-scenes discussion of the possibility that the Republicans will seek to bypass the governor by redistricting through a joint resolution where only the Republican-dominated legislature can have a say.

“Our job over the next two years is to hold the legislature accountable and keep the issue in the public eye,” said Chheda. “More and more legislators are hearing from their constituents that they want to see the next redrawing be a fair redrawing.”

Ruth Conniff is Editor-in-chief of the Wisconsin Examiner. She formerly served as Editor-in-chief of The Progressive Magazine where she worked for many years from both Madison and Washington, DC. Shortly after Donald Trump took office she moved with her family to Oaxaca, Mexico, and covered U.S./Mexico relations, the migrant caravan, and Mexico’s efforts to grapple with Trump. Conniff is a frequent guest on MSNBC and has appeared on Good Morning America, Democracy Now!, Wisconsin Public Radio, CNN, Fox News and many other radio and television outlets. She has also written for The Nation, The New York Times, The Washington Post, and The Los Angeles Times, among other publications. Her book "Milked: How an American Crisis Brought Together Midwestern Dairy Farmers and Mexican Workers" won the 2022 Studs and Ida Terkel Award from The New Press.

Supreme Court decision on Wisconsin maps part of a drive to… by Ruth Conniff March 25, 2022
Five signs of hope in Wisconsin’s dreary political landscape by Ruth Conniff April 20, 2022
Election deniers failed to hand Wisconsin to Trump but have… by Megan O'Matz October 6, 2022