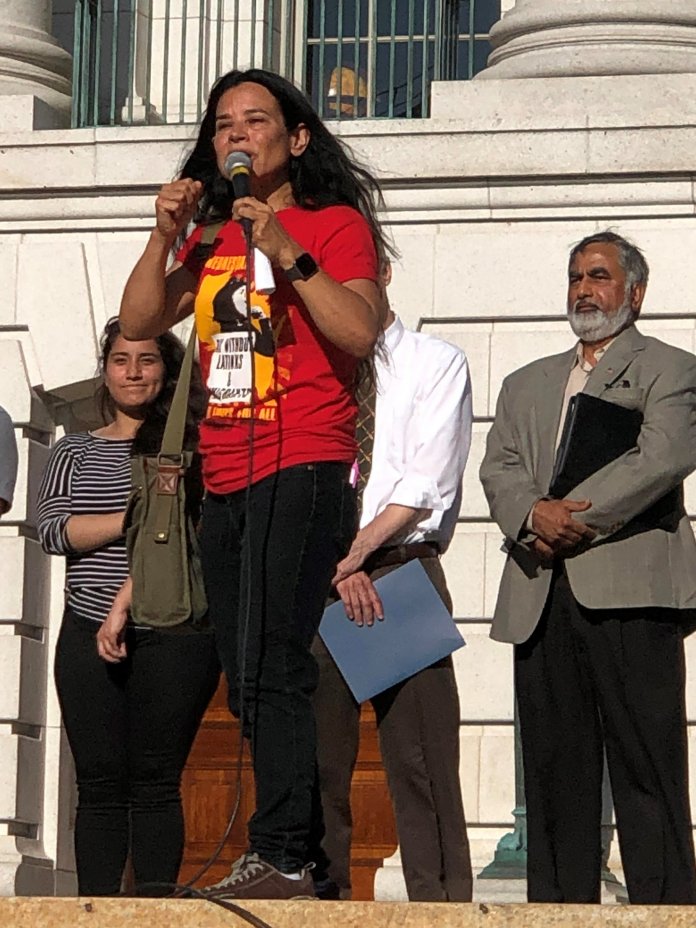 Community leaders spoke out against the abuse of immigrants during a rally at the Capitol in Madison on Thursday evening.

Responding to news of the massive roundup of immigrant workers at food processing plants in Mississippi that left children stranded as their parents were hauled away, immigrant-rights activists and state and local officials hurriedly organized the event to speak out against a growing climate of fear and hate.

“Kids right now in Mississippi are not able to eat because they are worried about their parents,” said Mario Garcia Sierra of Madison’s Centro Hispano. “Kids who are 5 and 6 years old didn’t have anyone to pick them up because of the raid,” he added. Garcia Sierra was encouraged by Madison’s response to local ICE raids last year, when officials came together to offer aid to immigrants and stand up against ICE.

If immigration agents return, “I expect every single one of you to be ready, and not to allow ICE to come into our community and take our friends and neighbors,” Madison Ald. Shiva Bidar told the crowd of about 200 gathered on the Capitol steps.

Rep. Chris Taylor (D-Madison) asked for a moment of silence to remember the victims of last week’s mass shootings, including the one in El Paso where the shooter specifically targeted Latino shoppers.

“Not only do our undocumented communities have to fear [ICE raids], but now they have to fear being targeted,” Taylor said.

Taylor and Rep. Marisol Cabrera have proposed banning ICE detention facilities in Wisconsin. Taylor is also supporting legislation to include immigration as a protected status in fair housing laws, to make undocumented students eligible for in-state tuition at the University of Wisconsin, and to restore driver’s licenses to non-citizens.

“This is a moral issue, this is an ethical issue, but it is an economic issue as well,” Taylor said, noting that Wisconsin depends heavily on its immigrant workforce.

Garcia Sierra agreed: “The whole dairy industry would collapse if people went on strike for five days,” he said, “and , too.”

The rise of racist violence, at the same time that the Trump Administration is separating families and spreading fear in immigrant communities with workplace raids and deportations is “not a coincidence,” said Christine Nuemann-Ortiz, executive director of Voces de la Frontera, an immigrant-rights group.

“These actions [by the Trump administration] are very clearly intended to do two things,” Neumann Ortiz said. “One is to provoke fear; the second is to degrade other people’s humanity, so that we don’t care what happens to them, and it is OK to kill people because of the color of they skin.”

Voces has been organizing hearings around the state to build bipartisan support for restoring drivers licenses to undocumented immigrants. That measure, which has yet to be introduced, and a bill to grant in-state tuition for undocumented students who grew up in Wisconsin, would both restore rights that were taken away in the mid-2000s.

“We in Dane County are not the federal government. We are your local government, and we welcome you, we respect you and we stand with you,” Parisi said, addressing immigrants in the crowd.

“Despite what our president tweets, todos son bienvenidos aqui,” Rhodes-Conway said. “Our country was built by indigenous people, by enslaved people, and by immigrants, and we must not forget that,” she added. “We know our immigrant friends and neighbors are here to stay.”

Parisi introduced Fabiola Hamdan, noting that she was the first county-level immigration affairs specialist in the nation.

Hamdan, who grew up in Bolivia, described the strain of working with asylum-seekers who fled to the United States after their homes were burned and they lost everything, only to continue to live with fear and uncertainty in the United States.

“Just this week we sent the body of an eight-year-old back to Guatemala,” Hamdan said, her eyes welling with tears. “He was killed in a tragic accident on one of our dairy farms.”

“The work is exhausting,” she said. “But we are committed to this work, because we believe in the future of this country. And we are here to stay.”

Other speakers also gave emotional testimony about living in an increasingly hostile climate for immigrants.

Stephanie Salgado, an activist with the Youth Climate Action Team, described fleeing Honduras with her family as a child. In Spanish and English she addresses “all the immigrants who have felt little . . . that your dreams are a joke.” After naming and describing the victims of the shooting in El Paso, she called for bringing people together.

Madison School Board member Ananda Mirilli said that, as an undocumented immigrant. “I still bring my passport when I cross the state line, and when I see a uniform, my heart beats faster.” She choked up as she described the fear of being deported and separated from her daughter.

Masood Ahktar, founder of the group United Against Hate, talked about giving up his citizenship in India to become an American, embracing the country’s highest ideals. And, he  added “I’m also a proud American Muslim.”

Saddest day of my life

“The saddest day of my life,” he said, was when a TV producer called him in 2016 to say there was discussion in the White House about starting a Muslim registry, and asked for his reaction.

“This singling out a minority…is not what America is all about,” he said.

Of the recent mass shootings,  he said, “Who killed those people, let’s ask that question.”

“Was it the Islamic State? Was it Al Qaeda people? Were they Muslims from those countries this country has banned?”

“Were they immigrants?” He continued, “Were they refugees?”

“No!” The crowd responded.

“They were Americans. They were born here,” Ahktar said. “They were misguided . . . white nationalists.”

White nationalism, Ahktar declared “is becoming an American ISIS, and we need to stop it before it becomes a global ISIS.”

After the rally, Primitivo Torres, who moved to Wisconsin from Texas to help run a statewide coalition to push for driver’s licenses, talked about the political strategy behind trying to win back rights for immigrants.

“We are talking to all Republicans,” Torres said. “ I know where Tony Evers stands. He’ll sign a bill if it gets to his desk. We need to get Republican sponsorship and Republican support.”

Torres said he has a meeting with Assembly Speaker Robin Vos in a few weeks: “It has to come from the Speaker.”

Until recently, Torres was helping immigration attorneys with legal work in Texas’ two family detention centers, preparing for credible-fear interviews that are required for immigrants to receive asylum, and lining up sponsors so people could be released from detention.

‘I saw the family separation firsthand’

“I was there when it started. I saw the family separation firsthand,” he said. “It affects you so much being there.”

Torres said he came back to Milwaukee, where he has family, to work on the drivers’ license issue and to get “refreshed.” He explained: “So I can go back down there and keep working.”

In El Paso, he added, “there was already this fear. You can feel it.”

Torres believes that much of border policy, including proposals for indefinite detention, is driven by a desire to increase earning for for-profit detention centers.

“But for now, my job is to get drivers’ licenses in Wisconsin. We are going to do it,” he said, brightening. “The Republican farmers come up to me—they’re the ones that want it. We’re doing it the right way. We’re going to get it done.”

Pressure mounts on Tosa PD, including from Jay-Z