Speakers, including professors and graduate students, wait to address creating a rule that prescribes penalties up to expulsion for students who disrupt campus speakers.

The UW System Board of Regents’ public hearing Tuesday, on the controversial policy that mandates harsh punishments for students who disrupt campus speeches and presentations, fulfilled concerns that holding such a hearing weeks before students return to campus might not be successful.

Held in a large room at Gordon Commons, roughly nine out of every 10 chairs sat empty and there was not a Board of Regents member to be found. In fact, when one speaker sat down to give her testimony beginning by politely addressing the three men seated at the head table by thanking Regents for listening to the public, one of them stopped here and stated: “To be clear, we’re just staff — not members of the Board of Regents.”

The hearing was scheduled from 3 to 5 p.m., but testimony was over by 3:30 p.m.  All nine speakers opposed turning the policy into administrative rules.

The Regents adopted a policy in October 2017 that mandates suspension if a student disrupts the free-speech rights of others twice, and expulsion after the third offense. In July, the Regents voted to hold this hearing on the scope statement, the first step in a process of turning the policy into permanent rules.

“In short, the proposal is in search of a problem that does not exist and would create new ones of its own,” began Anthony Flynn, a graduate student and steward with the Teaching Assistants Association. “Instead of protecting free speech on campus, it would have a chilling effect on it. Freedom of speech includes a right to speak out against speech that one finds abhorrent.”

Flynn added that the policy “will not protect students,” rather it would give additional power to the administration, which would determine what constitutes “material and significant disruption.” 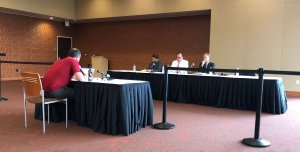 Mathematics professor Jordan Ellenberg contrasted the policy with other crimes or infractions on campus, as this one lays out “a specific penalty for a specific infraction.” He noted the irony that it is also specific in regards to “students who infringe on the rights of others to free speech,” yet fails to address consequences there would be for administrators or regents who take away freedom of speech and expression from students.

The debate began in 2016 after Breitbart editor Ben Shapiro visited UW-Madison to give a lecture and student protesters lined up on the stage and chanted over him. The situation was peacefully resolved: Shapiro wrote the word “MORONS” on the chalkboard, the protesters departed with one hollering a vulgarity at Shapiro against white supremacy and Shapiro responded by giving that student the middle finger on both his hands. Watch the event here: https://www.facebook.com/watch/?v=10156078282677408

Republican legislators, upset by the encounter, authored a “three-strikes” bill with the punishments of suspension and expulsion for disruption, called the Campus Free Speech Act. It passed the Assembly 61-36 along party lines but died never reaching the floor in the state Senate.

Speaker Robin Vos, an author of the bill, complained that there were not enough conservative speakers on campus, challenging the campuses to invite more of them. Then in his 2017-19 budget, then-Gov. Scott Walker allocated $10,000 to codify “the state’s commitment to academic freedom” with the money given to UW System to revise its policies. In October 2017, the Board of Regents then passed its policy laying out the current punishments for disruption that are now under consideration for being permanently codified. The one dissenting vote was from then-State Superintendent of Public InstructionTony Evers. Since becoming governor, Evers has communicated that he continues to be opposed to the measure.

Opposition to mandatory punishment was a recurring theme Tuesday. Associate professor Eric Sandgren, from the UW School of Veterinary Medicine, spoke as vice president of the Wisconsin Conference of the American Association of University Professors, which he said opposes mandatory punishment measures. In urging rejection, he too cited a chilling effect on student expression and labeled it “part of a nationwide partisan policy agenda that doesn’t belong at our university.”

Professor of Law Steph Tai made sure any regents who watch the taped testimony knew word is spreading: “This is attracting attention around the country,” she said. “And it is controversial.”

Associate professor of English Timothy Yu said this could create a “safe space on campus” for bigoted speakers. “This is favoring the rights of visiting speakers not to be disrupted over the rights of people who are here [at the UW] from being heard.”

One undergraduate student who did show up to speak was from the UW-La Crosse. K.C. Cayo felt this was as the latest in a string of rights being taken away from those who choose to dissent. “If you have to pay for free speech with suspension or expulsion, your right to speak is not free,” said Cayo. “We should not be punished for taking peaceful actions.”

Tuesday’s public hearing was just the first step in a long process of turning the policy into administrative code. In addition to testimony given at the meeting, public written comment can also be submitted to the Regents here before an August 20 deadline.

She helped create The Big Lie. Records suggest she turned it… by Cassandra Jaramillo June 9, 2022
He beat her repeatedly. Family court tried to give him joint… by Megan O'Matz September 16, 2021
Hintz reflects on his time leading Democrats into… by Melanie Conklin January 10, 2022