The voices behind driver’s license reform

Voces de la Frontera rally at the Capitol supporting driver’s licenses for all. (Photo courtesy of Voces by Susan Ruggles)

Until 2007, undocumented immigrants in Wisconsin could obtain driver’s licenses. But after the passage of the federal REAL ID Act, authored by Wisconsin Congressman Jim Sensenbrenner (R-Menomonee Falls), states were forced to deny driver’s licenses to people who didn’t have Social Security numbers.

Guadalupe, a single mother of six from Milwaukee, shared in a Wauwatosa public forum on driver’s licenses what it was like having a driver’s license before the REAL ID law went into effect, and what it’s been like since the ban. She shared, “ I came to Wisconsin over 16 years ago, a recent widow with six children who depended on me as mother and father. As a single mom, I had to learn to drive because my kids needed to go to school. I needed to go to work to take care of them and buy groceries to feed them. I paid a man to teach me to drive and learn the rules of the road, and it was a great challenge for me. But I was so proud when I passed my written exam and my driving test and I finally received my driver’s license.  I bought insurance right away. When REAL ID was implemented in Wisconsin I could no longer renew my driver’s license, but I still had to drive to support my family. But now I drive with fear. Every time I, or other immigrants in my situation, see a police car there is a fear that a simple traffic infraction will lead to deportation because of ICE (U.S. Immigration Customs Enforcement) using that information to identify and detain us, separating us from our families and community.”

Like Guadalupe, in the absence of federal immigration reform, 11 million people are unable to adjust their status because there are too few family and employment visas available. For example, it can take decades for a U.S. citizen to adjust the status for their brother or sister, and in the meantime they live every single day in the fear of being picked up by ICE. Under the Trump Administration, protections that were won by the immigrant-rights movement under the Obama Administration were stripped away and every day we witness the escalated attacks and threats on immigrants and refugees.

Repealing federal REAL ID or passing federal immigration reform is not realistic under the Trump Administration. That is why Voces de la Frontera has focused on what we can do at the local and state level to pass policies that value the dignity and contributions that immigrant families make to our state.

Voces has organized a statewide tour running through August called “Defending Our Families, Restoring Driver Licenses for Immigrants in Wisconsin” to bring together the immigrant community and U.S. citizens to learn and take action to bring back driver’s licenses for immigrants once again. Under REAL ID, states can pass a state driver card (and state ID) that allows immigrants who are ineligible for a social security number to have access to a driver’s license that allows them to legally drive, obtain auto insurance and serve as a form of identification with local law enforcement. It cannot be used as a form of federal ID. The driver’s card cannot be used for voting, nor does it adjust immigration status.

Allowing all immigrants to obtain driver’s licenses would benefit everyone in the state. According to a recent report by Kids Forward, Wisconsin drivers would save $16 million in auto insurance premiums, each year, insurance companies could see $13 million in increased revenue, local economies would grow as immigrant workers could more easily get to work and Wisconsin roads would be safer.

Above all, immigrant families would be able to live without the constant fear that goes along with criminalizing a common daily activity they rely on to get to work and to school.

Employers, community members, local officials and immigrants themselves have come out to give testimony at these hearings. Two other stories in Green Bay and Racine, stand out in my mind as powerful examples of what we are fighting for with the driver’s license campaign.

In Green Bay, Raymundo Martinez-Romero, a grandfather who worked for over 10 years as a landscaper told the story of how he was recently picked up by ICE for driving without a license, and now faces deportation and separation from his wife of more than thirty years, his children, and grandchildren.

He said, “I don’t want to be separated from them because they are my life.”

Green Bay Mayor Eric Genrich, who committed to write a letter to the state legislature in support of restoring driver’s licenses, recognized the courage of Raymundo and other immigrants who were speaking publicly about the challenges they face under the current system and said the least he could do was to lend his voice in support. Green Bay Police Chief Andrew Smith is one among many local law enforcement that recognizes the benefits to public safety when immigrants and their families do not fear law enforcement, when more people are tested and insured on the road and when police are able to accurately identify someone.

In Racine, a U.S. Marine, Marcos Calderon, who is deployed in Afghanistan sent written testimony that was read aloud on his behalf. His undocumented father was deported for driving without a license, while he is fighting for the country that broke up his family.

Part of his statement said, “I was born and raised in Racine, Wisconsin. I’ve lived on the same block my entire life. I felt honored with the country and with the hard work my parents have done to get us where we are today. I decided to join the Marine Corps and left for boot camp in 2018.

“That’s when I received the news of my father being deported. My father was pulled over for driving with no license. Our neighbor from down the street had passed away and my dad was going to Lopez Bakery to get some bread for the family as a sign of respect and comfort for the family when he got pulled over. He was driving my vehicle with a valid registration and insurance at the time of the incident. After being transported for fingerprints, his bail was paid, but on his way out ICE picked him up.  My father had a dream to see his son in uniform coming home happy, instead a Marine came home with a hole in his heart and a heavy soul. A family torn apart that struggles especially now that my mother is sick and can barely move around on her own. Life as we knew it to be in a ‘free’ country isn’t so free anymore when your family is broken apart and shattered hearts are feeling so heavy. I hope to be able to see my dad once again and thank him for his sacrifice because without him I’d be nothing near the man I am today. I love you dad.”

Hearing all of the testimonies during this tour has been very, very moving, and it also gives me hope because of the broad support and desire to take action. The purpose of the statewide driver’s license tour is to build broad, grassroots support around the state for restoring licenses.

This means involving farmers, elected officials and the immigrant community itself to fight for a bipartisan bill to restore driver’s licenses for immigrants–and to try to get it done this year.

We need people to call on their state representatives. We need associations of employers to join the fight. We need local law enforcement. We need everyday people, voters, immigrants, standing together. That is the way we will get this done. 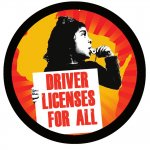 In particular, we need to win over some Republican co-sponsors and voters, and to get Democrats and Republicans to work together to move this forward. This is not a “political” issue.  This is a common-sense policy that makes our communities and our economy stronger.

We are hearing people who voted for Donald Trump say that they recognize the need to restore driver’s licenses for immigrants. People who work in factories or on farms recognize that there’s a lot of fear, that employees aren’t driving to work or shopping as much, and as a result it contributes to farms and other businesses closing.

The recent ICE raids and family separation at the border have also changed people’s minds and awakened their consciences.

The fact is, there has been broad support for a long time for driver’s licenses for immigrants in Wisconsin who are undocumented, but it needs to be consolidated and we need to move fast to get it done.

Every day we are reminded of the urgency to get this done. This is something that we can get done, we just have to get involved. Please join us at our tour stops (or host us) by visiting www.vdlf.org.

The voices behind driver’s license reform