“It doesn’t mean that I’m the most caring or wonderful teacher,” McCarthy told her class at Greendale Middle School.

Instead, she said, a committee comprised of educators, community leaders, and students chose her because “what I believe means something to people.”

She has not been shy about using her position to get the word out about education as a tool for civic engagement and social justice.

On the Facebook page she created to document her experience as the 2020 Middle School Teacher of the Year, a photo shows her standing in front of a large mural of Woody Guthrie. She is gazing up at the message on his guitar: “This machine kills fascists.” 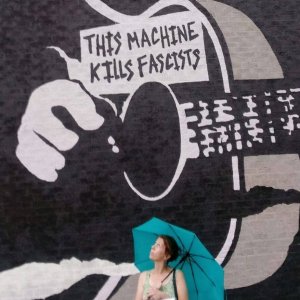 When State Superintendent Carolyn Stanford Taylor announced the award, she asked McCarthy whether her civic-mindedness and the activities she is involved in outside of school are related to her teaching. (McCarthy is a board member of the League of Women Voters of Milwaukee County)

McCarthy responded: “Once you understand the struggles that people have gone through to guarantee the rights of citizenship and the right to vote, you can’t just make it a lecture day in class. It has to be something you live, and you have to get your students to know this is their responsibility. They have a country they need to help take care of.”

“I think it’s really important that … students in particular see themselves reflected in history,” McCarthy added. “So in my classroom they should see an image of someone who looks like them. They should hear a story of someone who made history who could have been them.” McCarthy’s students do projects that touch on issues that interest them, from trying to improve the atmosphere in their middle school and avoiding products made by slave labor.

“It’s a daunting task to teach kids about how our government works, when watching current events is so disheartening,” McCarthy told the Wisconsin Examiner. “You have to say, ‘This isn’t how it’s supposed to work.’”

McCarthy, 42, started teaching as a second career, after working in museum education. She was a student teacher at Greendale when Gov. Scott Walker proposed Act 10, busting public-employee unions and drawing tens of thousands of teachers and their supporters to the Capitol in Madison for historic protests.

“Probably, it’s why I’m in the position I’m in—because other people said, ‘I don’t want to do this anymore,’” McCarthy says.

No one who taught school during the Walker years could miss the demoralizing effect of Act 10, escalating anti-teacher rhetoric and the feeling that teachers were becoming a political target.

“The attacks on teachers were kind of the start of the way we attack all kinds of people now,” says McCarthy.

That realization helped propel her interest in rebuilding civic life, starting with her middle-school students. So far, in the first few days of school, “we are working on building community,” McCarthy says. “That takes work. Everyone has a say, everyone gets to have an opinion. . . . It seems basic, but a lot of Americans could use a lesson in it, honestly.”

The class will soon begin a unit on human rights. “I used to start with the history of slavery, and then at the end I’d sort of tack on, ‘You know, there are still slaves today,’” she says. “The students would get really upset and would want to do something about it. So now that’s where we start.”

McCarthy’s students research products made by enslaved people, and work up arguments to persuade others not to buy them.

“It’s very motivating around Halloween to find out how much of their chocolate is made by children who are enslaved,” says McCarthy. “These are not easy issues.”

“McCarthy is a leader in engaging students in self-directed research, known as ‘inquiry-based learning,’ the Department of Public Instruction points out in a press release on her award. “Educators nationwide asked to learn about her ‘Four I’s of Inquiry’ model for fueling students’ curiosity.”

Among McCarthy’s students’ projects was a project to respond to a “crisis of unkindness” at school.

“In one class I had kids of the Muslim faith talk about the things people had said to them,” she recalls. Other kids have also become comfortable enough to talk about facing discrimination and bullying with the group. “It depends on the classroom climate,” McCarthy says. “I appreciate when they are willing to do that.”

McCarthy sees unkindness in middle school as “a mirror of the way people attack each other on social media.”

“In some ways our whole culture is about ‘It’s OK to antagonize and provoke and say things without consequences,’” she adds. “We took it on as a project and said. ‘How can we make middle school better?’ Because no one in the history of the world has said they loved middle school.”

Inspired by examples of activism from history, the students developed plans for improving their school culture, presented them to administration, and formed a “Fix It to Fight It Club.”

McCarthy’s greatest passion is the idea that “kids deserve to see themselves as part of our American story,” and to understand that they, too, can make history.

“The people who have the power aren’t the people whose voices we listen to in my class,” she says. “The people we study have a lot on their plates—women and minorities fighting for their rights.”

Last year her class studied the 53206 zip code in Milwaukee. “Their eyes were opened about segregation in Milwaukee,” McCarthy says. The most important skill students can learn, she says, is critical thinking. And social studies is a great class for developing critical-thinking skills, even though it is sometimes devalued because it doesn’t show up as a measurable skill in reading or math, McCarthy says. “It’s incredibly important to keeping our country healthy and our citizens aware.”

In her eighth-grade US history class, “I don’t really use the textbook,” she admits.

How does she pull that off, in an era when teachers are feeling less and less able to be creative and more constrained by cookie-cutter curriculum and an emphasis on standardized tests?

“I have an incredibly supportive principal,” McCarthy says.

She also works with a team of colleagues in both social studies and English who have built an interdisciplinary approach to projects.

“We always had the freedom to do what we wanted,” McCarthy says.

Parents pushed back once, she recalls—“when I talked about white privilege in class. But we talked about it and I was able to explain what I was doing. The door is open.”

McCarthy knows she is fortunate to work in a supportive environment.

“It is really sad that in some school districts the direction they are going in is really uniform and scripted,” she says. “Every year my curriculum changes because the students change. Plus, the world is changing.”

Ruth Conniff is Editor-in-chief of the Wisconsin Examiner. She formerly served as Editor-in-chief of The Progressive Magazine where she worked for many years from both Madison and Washington, DC. Shortly after Donald Trump took office she moved with her family to Oaxaca, Mexico, and covered U.S./Mexico relations, the migrant caravan, and Mexico’s efforts to grapple with Trump. Conniff is a frequent guest on MSNBC and has appeared on Good Morning America, Democracy Now!, Wisconsin Public Radio, CNN, Fox News and many other radio and television outlets. She has also written for The Nation, The New York Times, The Washington Post, and The Los Angeles Times, among other publications. She graduated from Yale University in 1990, where she ran track and edited the campus magazine The New Journal. She lives in Madison, Wisconsin with her husband and three daughters.