Milwaukee neighborhoods: The face of addiction

“Opioid Epidemic” by DES Daughter is licensed under CC BY-NC-SA 2.0

In 2018, the Milwaukee County Medical Examiner’s office documented 384 drug-related deaths. Though slightly less than the more than 400 deaths in 2017, the number still dwarfs those from the first half of the 2000’s. Looking closer at fatal overdoses city-wide reveals the local face of addiction.

Using data provided by the Medical Examiner’s office, Wisconsin Examiner analyzed overdose trends by zip code. The spreadsheet the office provided detailed information on the dead including names, addresses and causes of death. It also shows the zip codes for both the location of the overdose (incident), and the place of death. This helps shed light on how individual neighborhoods are affected. Especially since some have hospitals, which treat people from all over the city. This is updated from a similar analysis I did last year for Urban Milwaukee. 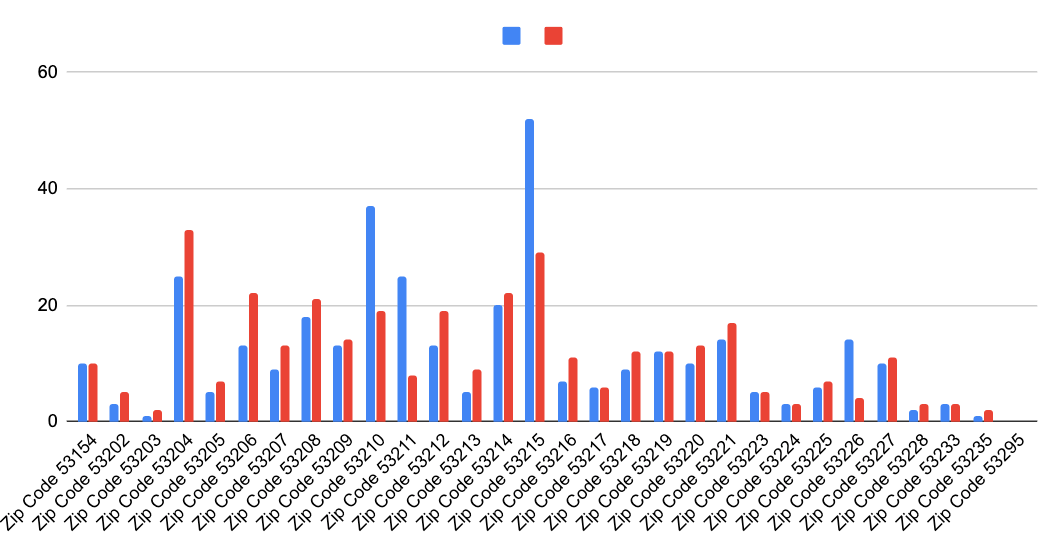 Milwaukee’s 53215 zip code, with two hospitals, was an example of how nearby hospitals can inflate death totals. Many people are transported into 53215 to get treatment for an overdose. Meaning despite having a surge of 52 deaths in 2018, 53215 had just 29 overdoses reported as having originated from the zip code. Some of those people may have then traveled to another zip code before perishing.

The 53210 zip code also had a high number of deaths Wheaton Franciscan St. Joseph Hospital is  the area’s primary medical center. Just 19 fatal overdoses originated within 53210 compared to the total count of 37 people who died there.

On the other hand, the 53204 zip code had a higher number of deaths which originated from there this year compared to last year. Whereas last year saw 21 fatal overdose incidents inside 53204, this year brought 33.

This area encompasses the northern half of Milwaukee’s predominantly Hispanic south side, and 53215 to its immediate south. By comparison, the 53233 zip code, beginning along the northern border of 53204 had just three deaths. The area with the next highest count of reported fatal overdoses was 53206. On the opposite end of the city, in Milwaukee’s African-American north side, was the origin of 22 reported incidents of fatal overdoses. The reports indicate 13 people died within that particular zip code.

“The issues are so complex between drug addiction, between prostitution, between trafficking,” Laurie Ganiere of God Touch Milwaukee told Wisconsin Examiner. Based on the south side, God Touch offers faith-based options for men recovering from homelessness and addiction. “It’s a complex mess,” says Ganiere. She’s not wrong.

Historical segregation may also play a role in determining which areas of Milwaukee experience more fatal overdoses. The Cream City is also sometimes called “The Harvard Of Pimp Schools,” due to the amount of human trafficking in Milwaukee. Factor in a lack of treatment or housing options, as well as the periodic presence of fentanyl in a variety of drugs, and you start to grasp the scale of this vast problem.

Deanne Lawson, executive director of the Inner Beauty Center of Milwaukee, is on the front lines of the crisis. Inner Beauty works with women who are addicted, homeless or the victims of human trafficking and prostitution.

“The majority, I think 75% of the women who come in that are addicted to heroin,” she told Wisconsin Examiner. The rest, she explains, are normally addicted to cocaine, normally in its “rock” form known as crack.

Of the 384 drug-related deaths in 2018, heroin was involved in 147 of them, and cocaine in 164. Some 255 of the deaths, however, were listed as “mixed drug intoxication, with a variety of substances found in the victim’s system. According to the medical examiner’s data, 110 of those who died in 2018 were women.

Not all of the women Lawson interacts with follow the typical pattern of treating a surgery or injury with pain medications before moving onto heroin. “One woman told us, ‘it’s getting too expensive to buy the pills so I think I’m going to either go on methadone or I’m going to start using heroin,” recalls Lawson. “To her, those were her only two options.” This particular woman used pills recreationally, and eventually chose the cheaper route of heroin.

Yet another woman had a different story. “The father of her children was a heroin addict,” Lawson recounted. “She never did heroin, she never wanted to.” After her dad died, “she just wanted to forget,” says Lawson. Over the last two years, Lawson has heard similar stories from other women regarding addiction shadowing the death of a loved one. Often a friend, boyfriend, girlfriend or another trusted person supplies their first dose.

These days, however, that first hit might also contain fentanyl or one of its derivatives. Fentanyl has become increasingly entrenched in the black market over the last five years throughout North America, pushing up the death toll. “We have seen an increase, over the last couple years, of overdose deaths,” Lawson reports. The addicted population is split about the powerful drug, which is on average 50 times stronger than heroin. Whereas some seek it out as a powerful high, others fear its lethality and unpredictability.

Addiction manifests both outwardly, and inwardly by rewiring the brain. Inner Beauty conducts tests to determine if the women are suffering from ACE (Adverse Childhood Experiences). Early trauma of this kind can alter the brain’s pleasure centers, the same regions targeted by heroin. “It’s almost like a parallel that they stop feeling because of the high ACE score, but the heroin allows them to feel.” Some of these same parts of the brain deal with memories, which are often attached to emotions. Heroin, fentanyl, and similar drugs hijack this system.

Lawson has watched hot spots of drug activity shift from one part of the city to another on a yearly basis. “About 80% of our contacts during street outreach last year were on Greenfield Avenue,” explains Lawson, “27th street and then down to the lower numbers. On the south side, it’s mostly Greenfield and National [Avenue].” Whereas National Avenue has been known as an active street for the last seven years, “what we’re seeing is there’s more trafficked women on National and more drug-addicted women on Greenfield.”

Driving north along  those roads, you’ll find yourself in 53214. The origin of 22 overdoses, it experienced 20 deaths, higher than the 16 deaths, and 17 reported incidents in 2017. The 53226 zip code, also unique to West Allis, saw 14 overdose deaths in 2018, though just four incidents having originated from there.

The shifting centers of drugs and prostitution keep moving to stay ahead of police patrols. “The community members, they see the women more than they see the buyers, the traffickers, or the johns,” says Lawson. “That’s like squeezing the balloon. If you put pressure on one area, you’re not getting rid of the air. You’re just shifting it to a different part of the balloon.”

Lawson also fears this kind of approach, “becomes a revolving door.” She told Wisconsin Examiner, “There’s very little resources for the women to get help, and the focus is always the women being criminals when really they’re the victims.”

Advocates like Lawson aren’t alone though, as recovering users, survivors, and their loved ones re-enter the fray hoping to save more lives. Whether it’s through sharing stories, holding informational meetings, distributing anti-overdose drugs like Narcan, or just offering kindness. “Over the last three years, we’re seeing a direct impact on our students that are coming out of that lifestyle,” assures Geniere, “making an impact in the neighborhood.”

Milwaukee neighborhoods: The face of addiction