WASHINGTON — When longtime New York Times labor reporter Steven Greenhouse was in Wisconsin several years ago to cover then-Gov. Scott Walker’s battle with unions, he talked to his 86-year-old mother on the phone.

Greenhouse, who covered the labor movement for the Times for nearly two decades until 2014, recently released a book titled, “Beaten Down, Worked Up: The Past, Present, and Future of American Labor.”

One of his objectives, he said, was to “sound the alarm about a hugely important phenomenon that far too few Americans understand or are paying attention to — and that is that worker power in the United States has fallen to a dismal low.”

Worker power in the United States is at its weakest point since the 1930s, Greenhouse said. “As a result, lots of things are badly out of whack, making millions of Americans feel that the system is deeply rigged.”

That sentiment helped sway the last presidential election, he said, where longtime union strongholds like Michigan, Wisconsin and Pennsylvania voted for Trump, he said.

“We saw how that played out in November of 2016, when an orange-haired demagogue embraced the theme that the system is rigged,” he said, referring to the president. Now, he added, the Trump administration is “day after day rigging the system further against workers and in favor of the wealthy.”

Despite Trump’s claims, Greenhouse said, Trump has “not made America great again for American workers.”

Greenhouse warned that a decline in worker power has fueled decades of wage stagnation, increased income inequality and ensured that politics and policymaking are dominated by corporations and wealthy donors.

“Numerous studies have found that an important cause of America’s soaring income inequality is the decline of labor unions — and the concomitant decline in workers’ ability to extract more of the profit and prosperity from the corporations they work for,” he wrote in a recent Times opinion column. “The only time during the past century when income inequality narrowed substantially was the 1940s through 1970s, when unions were at their peak of power and prominence.”

Walker and other Republican politicians, he said, have “really milked” anti-union sentiment to weaken the labor movement in recent years, Greenhouse said Monday.

Unions and their allies, he said, should do a better job of explaining “that it’s better if we try to lift everyone rather than tear down someone who has it a little better than we do.”

Meanwhile, a recent survey shows public support for labor unions is at a near 50-year high. A Gallup poll released last month showed that 64% of Americans approve of unions — up 16% from its low point in 2009.

Greenhouse credited Democratic presidential candidates for their pro-worker messaging on the campaign trail.

“I think they really see how broken the economy is favoring corporations, disfavoring workers, and I think they also see that Democrats lost the three important union strongholds — Wisconsin, Michigan, Pennsylvania — and they realize that for the good of the Democratic Party’s future, it would help to rebuild unions,” he said. 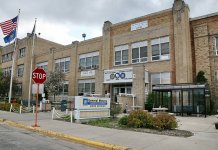 Telling the story of Janesville and General Motors

Hurry up and wait for farm crisis package