At a rally for common-sense gun laws on the steps of the Capitol,by the Wisconsin Coalition for Gun Safety, Rep. Chris Taylor (D-Madison) urged a crowd of about 150 people to support universal background checks and other measures to stem gun violence.

Instead of progress on gun safety, “what I’ve mostly seen in this building behind me is the repeal of policies like our 48-hour waiting period,” Taylor said. “We’re going to fight to get that back, along with red-flag laws.”

“We want universal background checks. What a no-brainer!” Taylor added. “Even though this statehouse isn’t with us, the people are with us.”

According to the latest Marquette Law School poll,  81% of respondents in Wisconsin favor “red flag” laws, allowing police to take guns from people who have been found by a judge to be a danger to themselves or others, 80% support expanded background checks. Among Republican voters, there was 74% for background checks, and 94 & among independents and 76% of conservatives.

State legislators were joined by family doctors who talked about the toll of gun violence they see in their practices.

“Last year, the NRA warned doctors to stay in our lane,” said Dr. Melissa Stiles, who sees patients at a family practice clinic in Belleville. “Guess what? We didn’t listen.”

Stiles has treated children who sustained gunshot wounds from guns that were not safely stored. And she has counseled family members of people who used guns to take their own lives.

Several speakers at the rally noted that September is suicide awareness month. Suicide accounts for six out of ten gun deaths in the United States, according to the Pew Research Center.

“After Sandy Hook, things changed in the medical community,” said Dr. Jeff Huebner. “I couldn’t look my kids in the eye and say,’ I’m not doing anything about this.’”

Gesturing to the Capitol behind him, he added “I hope they’re not allowed to continue to commit political malpractice and do nothing.”

State Rep. Sheila Stubbs (D-Madison) described campaigning in the wealthiest and poorest neighborhoods in the city. As she knocked on doors from Shorewood to the south side, voters told her, “We need radical gun control,” she said.

“We need to recognize that gun violence is a public health epidemic,” Stubbs added.

Jack Larsen, a junior at UW-Madison and an organizer with March for Our Lives told the crowd he took a bus to the Capitol from campus for the rally, although he would have preferred to go to the library and study. “How many of you are students?” He asked the crowd. “How many of you still have homework to do?” Hands went up throughout the crowd.

Students don’t want to lead the movement against guns, Larsen said, but they have no choice because of the gun-violence crisis.

Describing young people as the GPS of the gun-control movement, he added to the parents in the crowd: “you guys really do need help with GPS.”

Larsen recalled “duck and cover” drills at school when he was young, “in case some maniac” burst into the classroom with a gun. When those drills were deemed ineffective, “because too many people got killed,” he said, he and his classmates were told to scatter and run instead.

Lately, Larsen said, has seen ads for a Kevlar backpacks. “I don’t want that! I don’t like that! I’m OK with my regular backpack,” he said.

Brandtjen took to her official Facebook page to send a message to students to stop, Larsen said incredulously, “because she didn’t like what they were saying.”

‘I will never, ever forget’

The most powerful testimony at the rally came from state Sen. LaTonya Johnson (D- Milwaukee). The crowd grew silent as she described her experience “when I attended the first funeral for a child in my district.”

Ten year-old Sierra Guyton was killed when she was caught in crossfire on the Clarke Street Elementary School playground in Milwaukee on May 21, 2014.

“I will never, ever forget the moans that came from that family when that casket closed,” said Johnson.

She hoped never to repeat the experience, Johnson said.Then five-year-old Laylah Petersen was shot and killed in November 2014 in Milwaukee as she sat on her grandfather’s lap while he read her a book.

“This time I knew better than to walk up to the casket,” Johnson said, afraid that she couldn’t handle the psychological pain. Still, a large picture of Laylah at the front of the room made it impossible to ignore that this was a funeral for a little girl.

Then 13-month-old Bill Thao was shot and killed in December 2014 in a drive-by while inside his own house. Johnson described trying to find words to console his mother, and noticing a picture of Bill with tubes in his body that had already been disconnected from a life-support machine.

“The last picture she has is of her baby dead in a hospital bed,” Johnson said.

Then nine-year-old Za’layia Jenkins was shot and killed by drive-by shooters while she was inside a house on May 5, 2016.

“Our kids are at risk every single day,” Johnson said. “Depending on your zip code” going outside to play can be the most dangerous thing a child can do, she added.

Johnson waved a sheaf of papers at the crowd, which she said was a list of cases before Milwaukee’s gun court from 9 am to noon on Wednesday.

She read aloud the descriptions of defendants: “habitual criminal repeater,” “first degree reckless injury,” “use of a dangerous weapon.”

Reacting to the claim that concealed carry laws will make citizens safer, Johnson said, “Sierra Guyton was killed with a concealed-carry holder’s gun.” The gun was stolen and used in a shoot-out, she explained.

Describing a city awash in guns, Johnson added, “It’s about time our state starts standing up for our kids and those who cannot stand up for themselves.”

On Thursday morning Gov. Tony Evers and Attorney General Josh Kaul, along with Rep. Melissa Sargent (D-Madison) and Sen. Lena Taylor (D-Milwaukee) announced a bill to create an “extreme risk protection order” process to remove firearms from people deemed at risk of harming themselves or others.

“It’s time to listen to the will of the people who overwhelmingly want elected officials to start taking gun violence seriously for our kids, our communities, and our state,” Gov. Evers said in a statement announcing the legislation.

Under the proposed process, a family member, household member, or law enforcement officer could petition a judge to temporarily prevent someone from possessing a firearm.

Evers expressed frustration that the Legislature has refused to take up red-flag legislation or a proposal for universal background checks.

“Each and every day officials choose cowardice over common sense,” Evers said at a press conference announcing the measure. “That choice has significant consequences. The consequences of inaction are too high, folks.”

“It’s widely known that we believe this legislation poses threats to due process and the 2nd Amendment rights of law-abiding citizens,” Fitzgerald and Vos stated in a press release.

The Republicans also reacted to a Evers’ answer to a question at the press conference that he would consider mandatory gun buy-backs for assault weapons, as proposed by Democratic presidential candidate Beto O’Rourke, “but my focus is on these two bills and on the two offices [of GOP leaders Fitzgerald and Vos] that would be able to prevent it from going to hearing and to a vote.” 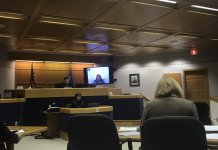