Legislation that would make it a felony to trespass on pipeline and other energy sites is exposing some divisions among Democrats and making allies of business groups and labor unions.

Critics, principally environmental advocates, contend the measure would stifle dissent against controversial projects. Proponents, including Democrats allied with labor, are defending it as a worker safety initiative and reject the claim that it would impinge on First Amendment rights.

The legislation—Assembly Bill 426 and its companion, Senate Bill 386—follows escalating opposition across the country, especially to oil and natural gas pipeline projects, by activists whose goals range from preventing local environmental damage to a broader attack on the fossil fuel industry for causing global warming.

The bills were authored with extensive input from energy industry lobbyists and resemble a national model authored by the business-backed American Legislative Exchange Council. But they have also drawn together a rare coalition that includes Democrats as well as Republicans as cosponsors, and labor unions along with the business interests. If passed, people charged under the law could be convicted of a Class H felony punishable by fines of up to $10,000 and prison terms of up to six years.

“We feel that the bill is unnecessary, and could cause significant harm to individuals who might be unfairly or unjustly prosecuted under the proposed laws,” Peg Scheaffer, director of development and communications for Midwest Environmental Advocates, told Wisconsin Examiner. MEA has registered to lobby against the measure.

“There are existing laws that protect property and enforce trespass,” she said. “Making this a felony charge puts someone who’s charged with this in the position of having to defend themselves at significant expense.”

The pair of bills expand on 2015 Act 158, which made it a felony to trespass on or damage the property of an “energy provider”—specifically a utility generating, transmitting, or distributing electricity and natural gas. The new bills “add oil, petroleum, water and renewable fuel facilities” to that definition, according to Sen. Van Wangaard (R-Racine). Wangaard is one of the Senate bill’s five lead sponsors—three Republicans and two Democrats, including assistant minority leader Sen. Janet Bewley (D-Ashland).

At a public hearing Thursday before the Assembly Committee on Energy and Utilities, emotions ran high on both sides at times. The bill’s supporters decried reports of vandalism on pipeline sites that they said threatened workers, while opponents warned the measure would shut down peaceful protests of unwelcome projects and violate the Constitutional right to freedom of speech and assembly.

Testifying in favor of the legislation, Rep. Jason Fields (D-Milwaukee), one of the Assembly bill’s lead sponsors and a member of the committee, called criticism he has received for supporting it “appalling.”

“I am African American. I support Black Lives Matter. I support Colin Kaepernick kneeling down because I support peaceful protesting,” Fields said. “What I find appalling is that somehow we’ve gotten to the point of making excuses for the destruction of property. Whether you believe your reason is valid or not, the law does not give you the permission to destroy another person’s property. I don’t care if you don’t like them, I don’t like the Ku Klux Klan, but I do not have the right or the option to go and destroy their property.”

Another Milwaukee Democrat and Assembly bill sponsor, Rep. Christine Sinicki (D-Milwaukee), testified that she has gotten hate mail and threats for backing the measure and accused opponents of depicting the bill in misleading ways.

“I am 110% opposed to mining. I don’t like pipelines,” Sinicki said. “But I’m also  against anybody who’s going to threaten or bully and who’s going to purposely trespass with the intent to cause vandalism.”

Sinicki said she supported the measure because, “I stand strongly with our Wisconsin workers.”

“For those of us on the left,” she said, “if we see, for instance, a Planned Parenthood being attacked or blown up or clients being harassed going in and out, we get angry and we want it stopped. Why is that any different than what we’re dealing with today? Everybody deserves those protections.”

Just how much of a threat protesters have been to projects is disputed.

In a telephone interview with Wisconsin Examiner, Scott Peak, a Local 139 representative assigned to the union’s pipeline workers, described incidents during the Enbridge oil pipeline reconstruction in Douglas County in 2017 and 2018.

Protesters would chain themselves to operating excavating equipment to interfere with the work, Peak said. On other occasions, he said, intruders cut hydraulic lines and wiring harnesses on machinery and poured fire-extinguisher chemicals into fuel tanks “so that if we ran it, it would damage the engine.”

“The worst one was when one of the backhoes was digging,” Peak said, and a protester jumped on the machine’s treads as it was operating. “If the driver would have turned, [the protester] would have been horribly injured.”

But in testimony to the committee on Thursday, Patricia Hammel, representing the National Lawyers Guild, an organization of lawyers representing progressive political organizations and activists, called worker safety “a smokescreen for companies like Enbridge and Husky Oil, which have already polluted Wisconsin lands and waters and brought death and injury to workers and residents near their facilities across the U.S.” She referred to two fatalities at Enbridge gas pipelines that exploded elsewhere in the U.S. and a Husky Oil refinery explosion in Superior in April 2016 that led to a city evacuation.

Bills such as the ones under consideration “that have proliferated in states since 2016 threaten civil liberties and public oversight of pipeline operations, which frequently violate the law and employ militarized police to intimidate activists,” stated Hammel. She called the bill unnecessary and noted her organization had already represented people charged under existing laws in incidents at the site of the Douglas County Enbridge Project and in North Dakota on the Dakota Access Pipeline.

Critics have questioned how the law would be enforced, however.

“There isn’t enough detail in the bill to enable us to understand who would have the authority to charge someone with a felony,” MEA’s Scheaffer told Wisconsin Examiner. Where the bill refers to a person’s “intent” to trespass, “that’s subject to the interpretation of law enforcement officials,” she said. “That’s very problematic, especially in the context of a high-sakes kind of charge.”

Testifying before the committee, Ronnie Monroe, who identified herself as representing landowners on the Enbridge Pipeline Corridor, said some property owners have complained of damage caused by crews working on pipelines crossing their land. The law, if passed, could be used against property owners who raise objections or confront project crews, she warned: “Landowners should have the right to walk on the easement unimpeded and if necessary to stop work that is damaging their own personal infrastructure.”

Another witness opposed to the bills, Christine McDonough, of Sun Prairie, referred to the arrests in 2013 of protesters at the state Capitol, including some who were injured. Although the charges were later dismissed as unconstitutional, “the arrests themselves still had consequences,” she said.

During Dakota Access Pipeline protests on the Standing Rock reservation in North Dakota, “in freezing temperatures people were sprayed with water, shot with rubber bullets and had dogs sicced on them,” McDonough testified. “This is under existing law. Now, fearing more pushback against policies, priorities and financial interests that will pollute our water and the land, the corporations have come to the legislature and other organizations asking for even stiffer penalties on citizens who dare to be near or at the energy companies’ properties.”

McDonough urged the committee to kill the bill. “These new laws will just allow more harassment and physical abuse of citizens at the hands of police,” she said. “They will also have a chilling effect on free speech. They’re unnecessary in a democratic society. They’re ALEC-designed bills designed to silence citizens standing up against the fossil fuel industries.”

The split between environmental organizations and some unions over bills such as AB426/SB386 is being replayed around the country as other states pass similar laws, says a labor historian who has written about the relationship between environmentalists and the labor movement.

But that broader relationship is much more complex than it sometimes appears, said Erik Loomis, a history professor at the University of Rhode Island. In his book Empire of Timber, Loomis explores how the International Woodworkers of America, the union representing timber industry workers in the Pacific Northwest, embraced conservation and challenged the industry’s environmental record in the 1930s and ’40s.

“There’s a much deeper history of much more active cooperation and alliance between environmental organizations and unions that goes much farther back than we think it does,” Loomis told Wisconsin Examiner in a telephone interview.

The United Auto Workers, for example, endorsed Earth Day and even before that established a Conservation and Resource Development Department as part of the union.

Despite that history, the unions backing laws that target protests on pipeline sites do so for a combination of reasons, both economic and cultural.

“In an era where you don’t have a lot of good union jobs any more, the ability or willingness of unions to side with the environmental movement over these questions has become heavily limited,” Loomis said.

In addition, the building trades unions endorsing the bills, such as the Operating Engineers and the Laborers, are often more conservative “and have often sided with employers over things like this,” he added. “They have a developmentalist ideology that coincides with employers, the idea that building anything is worth it.”

In particular he’s singled out the Laborers’ national leadership for “bullying” other unions into not speaking out against projects like the Dakota Access Pipeline and the Keystone XL Pipeline.

Loomis is skeptical about claims of widespread danger to workers from protests at oil and gas pipelines.

“This is a is a manufactured concern,” he said. “In the broad history of environmental protests, there have been occasions where workplace safety has been compromised. But that’s not recent. This is a massive overreaction to what are in fact peaceful protests.” 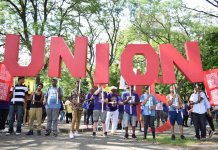 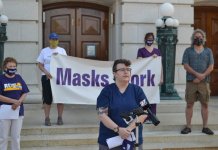 Bill ratchets up penalties for ‘trespassing’ on energy sites