Marquette University Law School Poll for October 2019 is announced during an “On the Issues” taping with Mike Gousha and Charles Franklin. (From the law school webcast.)

On Wednesday the first Marquette Law School Poll results came out since congressional committees initiated impeachment hearings against President Donald Trump. A national poll on similar topics was released the same day taking the public’s temperature on impeachment, offering a good comparison between Wisconsin and the rest of the nation. 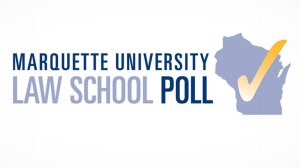 The latest national Quinnipiac University national poll showed that support for the impeachment proceedings reached a new high with 55% approval and 43% opposition. Approval for the inquiry nationwide rose by 4% just over the past week, while those opposed dropped by 2% in the same time period.

Poll director Charles Franklin, in his conversation with “On the Issues” host Mike Gousha, went through the takeaways from his most recent poll of registered voters in Wisconsin that was conducted Oct. 13 -17.

“There is a little less support in Wisconsin than there is nationally,” noted Gousha.

In Wisconsin, 46% of respondents think that there is enough cause for Congress to hold impeachment hearings, while 49 percent say there is not enough cause. It is lower than the national number, but a big jump up in Wisconsin since April 2019 when only 29% said there was sufficient reason for an impeachment inquiry.

When the respondents were asked if  Trump should be “impeached and removed” (as opposed to starting impeachment hearings) support dropped only slightly to 44%.

The poll also questioned respondents on whether they thought it was appropriate for the president to ask China or Ukraine to conduct investigations of U.S. citizens. “Two-thirds think it is not proper,” said Franklin. He pointed out that neither Trump nor Joe Biden were named in the question.

They also asked if people had read the transcript of the phone call between Trump and Ukrainian President Volodymyr Zelensky and 40% said they had.

“There is no difference across parties of whether you have read it or not,” said Franklin with a note of surprise in his voice. “Normally you would think the opposition party would eat it up because it is so bad.” That said, voters’ opinions on whether there was enough cause for impeachment hearings was far more bifurcated by party. Among Republicans 12% said yes, while 86% of Democrats said yes.

People show a lot of interest in this area of the poll because they want to discover who holds the spot of frontrunner in Wisconsin among the many Dems in the 2020 primary race. And we’ll get to those numbers. Promise.

But Franklin made an important point during his talk on this poll. Polls within a primary mean less because you might prefer Candidate A, but much of the time that does not mean you have negative feelings for Candidate B. So if A messes up or drops out or B does something great, it’s not uncommon for voters to switch.

“Basically they like all of them, at least the ones they know,” said Franklin of Democrats on the range of Democratic candidates running for 2020. “Those top three are very high and very tightly together. In a general election, it’s rare for people to feel positive about both the Democratic and Republican candidate… This is why someone who’s in the back of the pack could have a breakout moment, because they are not seen negatively.”

Okay, back to the numbers. The poll did head-to-head comparisons with Trump and South Bend Mayor Pete Buttigieg for the first time, as Franklin said they had been limiting those comparisons to four Democrats versus Trump.

“Last time we asked about Kamala Harris. This time we took her out,” said Franklin. In a hypothetical head-to-head matchup against Trump, the president was beaten by Biden, Elizabeth Warren and Bernie Sanders.

Among those who said they plan to vote next April in the Wisconsin Democratic Party primary (reminder: it’s an open primary, so this number may well include Republicans and independents) the following were the first choices:

And second choice for that same group of likely primary voters were:

Gov. Tony Evers and legislative Democrats have been pushing two gun safety measures that are overwhelmingly popular with Wisconsines and continued to be extremely popular in this poll: Extreme Risk Protection Orders (ERPOs) and universal background checks.

On background checks, there continued to be 80% approval overall, and 72% approval among Republicans.

On ERPOs (red-flag laws) 81% overall approved of having laws to allow guns to be temporarily removed from people a judge believes are a risk to themselves or others, and 74% of Republicans agreed.

But making its way into the poll this time is a policy that has not been proposed that likely will frustrate Gov. Tony Evers. At a news conference on the above two bills, a reporter asked him if he would be open to a bill for a mandatory buyback of assault weapons. He brushed off the question saying, “I’d consider it, but my focus is on these two bills and on the two offices that would be able to prevent it from going to a hearing and to a vote.” (A reference to Speaker Robin Vos and Senate Majority Leader Scott Fitzgerald.)

Since that news conference, whenever background checks and ERPOs come up — including in Evers executive order calling a legislative session around those two bills — the Republicans switch the topic to a forced gun buyback and state that Evers and Democrats want to take away Wisconsinites’ guns.

They have good reason to turn the conversation. That measure, shows the Marquette Poll, is not nearly as popular and far more divisive.

The poll question asked was this: Would you support or oppose a mandatory buy back program in which the federal government would require assault weapon owners to turn in those weapons in exchange for payment?

“The next least popular gun issue is a ban on assault-style weapons,” said Franklin. “It sort of stays in the mid-50s of support and the 40s of opposition.”

“There’s a lot of variation in what people think about guns,” says Franklin. For example, gun and non gun households alike” are positive on red flag laws.

Franklin explained that the survey was in the field “right on the heels of Agricultural Secretary Sonny Perdue’s visit,” to the state where he made a controversial statement that was still being debated weeks later about his implication that small farms are in trouble, and that if they want to survive, they might have to grow bigger.

So the Marquette Poll added in a question tied to that event. It was worded: “In 2018, Wisconsin lost nearly 700 dairy farms. Do you think the federal government should financially support small farms that are struggling to stay in business, or is this not the job of the federal government?

The answers: 63% said support the farms, while 30% said it is not the job of the federal government.

Each Marquette Poll involves 800 completed surveys of registered voters to capture a level of statistically significant representation of the general population that the pollsters are seeking.

Franklin kicked off “On the Issues” by offering a confession that there was a huge change this time … only 799 registered voters were polled.

That was because toward the tail end of the time the poll was in the field, one result had to be disqualified. When the person was asked if they were registered to vote, he gave his honest answer of, “No, but I plan to be.” When they asked his age, that individual answered, “14.”

“I’m sure this will be a future voter,” said Franklin, “but we went with 799 instead of 800 respondents this time.”