WASHINGTON — The U.S. House on Thursday voted to formalize its impeachment inquiry against President Donald Trump.

Lawmakers adopted a resolution that lays out procedures for the inquiry that is already taking place in the House. That investigation is centered on whether the president abused his power by attempting to pressure the president of Ukraine to investigate Trump’s political opponent.

The measure passed largely along partisan lines by a vote of 232-196, with no Republicans backing the resolution. One independent, Justin Amash of Michigan, voted in favor of the resolution and two Democrats voted against it.

Democrats hailed the resolution as a roadmap that will provide for a fair and transparent process, while Republicans supportive of the president assailed the effort as a political attack.

“What is at stake in all of this is nothing less than our democracy,” House Speaker Nancy Pelosi (D-Calif.) said ahead of the vote. “Sadly, this is not any cause for any glee or comfort. This is something that is very solemn.”

House Democratic leadership had previously announced a formal inquiry, but held a floor vote in part to combat complaints from Republicans that the full chamber hadn’t been allowed to vote. Still, Thursday’s vote is unlikely to reduce the partisan fighting over the process.

Trump wrote on Twitter Thursday morning, “The Impeachment Hoax is hurting our Stock Market. The Do Nothing Democrats don’t care!” He added later, “The Greatest Witch Hunt In American History!”

Trump’s critics in the House insist that the president’s behavior and their constitutional obligations have driven them to pursue their investigation.

“Don’t forget, we already have a motive. We have a crime. We have a confession and we have evidence,” Rep. Mark Pocan (D-Black Earth) told reporters on Oct 14. “We are in a position already to move ahead on this in a pretty quick way, and I think you’re going to see all this resolved … depending what comes out of some of the testimony they get the next few weeks, before the end of the year.”

Rep. Ron Kind (D-La Crosse), who had been one of just a handful of Democratic holdouts in committing to an impeachment vote, was present and voted yes. In fact, the entire Wisconsin congressional delegation voted along partisan lines.

“As a former special prosecutor, I believe that it is imperative for the House to uncover all of the facts and evidence so that an appropriate remedy can be determined,” Kind said in a statement after the vote. “Today the House took steps necessary to move forward with the investigation in a manner that will make testimony and facts public and give the president the opportunity to defend his actions. I firmly believe that impeachment should be the last resort, but as a co-equal branch of government, Congress has a constitutional obligation to investigate any misconduct—regardless of political party.”

“The House impeachment inquiry has discovered a substantial body of evidence that the president of the United States has violated the Constitution by placing his political interests above the interests of the country, thereby putting both our democracy and the nation’s security in jeopardy,” said Rep. Jamie Raskin (D-Md.). “In light of this evidence, the House of Representatives must fully investigate.”

Raskin said the impeachment inquiry guidelines are “fair and strong and make sure that we can and will defend the Constitution of the United States.”

Rep. Brendan Boyle (D-Pa.) said he didn’t come to Congress to pursue an impeachment process, but “the facts demand it.” He added, “What we decide today will say more about us than it says about the conduct of the president.”

Rep. Alcee Hastings (D-Fla.) said, “It’s time for the American people to see how the administration put our national security on the auction block in exchange for political favors.”

Another Florida Democrat, freshman Rep. Donna Shalala, served in the Clinton administration during President Bill Clinton’s impeachment. “Supporting this continuing inquiry is not a decision that any of us makes lightly,” she said. “It’s with profound sadness and disappointment that we have to continue this investigation. The accusations the House is investigating go straight to the heart of our Constitution.”

Rep. Joe Neguse (D-Colo.) said the vote marks “a serious and solemn day for our country.”

The House’s impeachment inquiry, he added, “has exposed the truth and uncovered significant evidence that the president abused his power. To honor the oath to defend the Constitution that each of us took, we must move forward with this impeachment inquiry.”

“No matter what is said by the other side today, this is a dark day and a cloud has fallen on this House,” said Rep. Doug Collins (R-Ga.), the top Republican on the House Judiciary Committee.

Rep. Debbie Lesko (R-Ariz.) called the impeachment process “a total sham.” The resolution, “which seeks to legitimize it, misleads the American public.”

Some moderate Democrats who voted for the inquiry stressed that their support for the investigation does not indicate how they may ultimately vote on articles of impeachment.

House lawmakers could vote as soon as this year on articles of impeachment against the president. If approved, the articles would be the subject of a trial in the Senate, where the GOP-led chamber is unlikely to vote to convict the president.

This story was updated a few hours after publication to add a statement by Rep. Ron Kind. 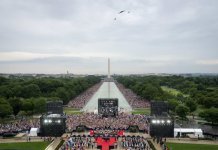