While the push on state government to raise Wisconsin’s minimum wage from $7.25 to $15 appears to be nothing more than a Democratic pipe dream, low-wage earners with the UW-Madison and state employees could soon see more money in their pockets.

The UW-Madison put out a release late on Friday saying it will increase the hourly minimum wage it pays to $15 an hour in the spring of 2020.  While there was no release from the Evers administration, the UW-Madison release mentioned the state making the same move. In response to a media query, Evers’ media team released the letter sent to state agencies and employees.

The letter lays out his plan: Permanent state workers’ minimum wage will rise to $15 an hour by Jan. 3, 2021. In addition, all workers will see across the board raises of 2% in each year of the biennium. The starting pay for prison guards will rise from $16.65 to $18.22 an hour. The total package would cost $84 million over two years.

While a rough outline for the compensation package was approved in the state budget, details were unveiled for the first time on Friday when the package was sent to the Joint Committee on Employment Relations for approval.

“For far too long our state agencies have been starved of the resources needed to fulfill [their] mission,” said Evers. He added that the raises are “investments in one of the state’s most valuable resources — state employees.”

The UW-Madison cited similar reasoning behind its raises.

“The increase in our minimum wage is a key part of our strategy for helping the university recruit and retain high-quality workers,” said Chancellor Rebecca Blank. “Employees who will benefit from this increase make important contributions to our teaching, research and outreach missions.”

Laurent Heller, UW-Madison vice chancellor for finance and administration, estimated the cost of the move to a $15 per hour minimum at $1.1 million. The goal of raising the minimum wage, according to the UW-Madison release, is to compete more effectively for workers in tight labor markets. “UW-Madison strives to be the employer of choice in the Madison area. With this change, we’re recognizing both the competitive labor market and the hard and valuable work done by our dedicated staff,” Heller says.

The university currently has around 50 vacancies in its Division of Housing, with starting salaries below $15 per hour. The raise does not affect temporary or student employees. The university also said that a general wage increase of 2% for the university’s faculty and staff will go into effect January 2020.

State travel is also getting a small upgrade: Uber, Lyft and taxi reimbursements will become allowable, and the hotel maximum reimbursement will go increase to $94/night.

“We look forward to working to improve the lives of our fellow Wisconsin residents and continuing to strengthen our workforce through workplace improvements,” Evers wrote. 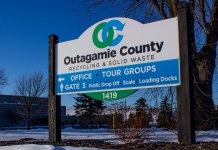