Members of the state Senate 2019 (Photo by Melanie Conklin)

Showing up on the job for just a handful of days out of a year sounds like an easy way to earn a paycheck. And that’s what the state Senate and Assembly, which concluded their business this week, did in 2019.

The state Senate met just 8 times this year to take up bills. The state Assembly clocked in for nine days of floor session votes this year — both were far and away the lowest in more than a decade. While the current session continues in 2020, there is talk of only holding two or three more session days before adjourning for good next year.

Far more egregious than the number of days, say Democrats, is how little got done.

“If you look at 2019 in its totality, it has been one that has been incomplete by the Republicans. It’s been one of a do-nothing Republican-led legislature,” says Senate Minority Leader Jennifer Shilling (D-La Crosse).

In 2019, as of mid-November, just 21 bills were signed into law. Past sessions from 2005 to the present, ranged in the number of laws enacted from a low of 242 to a high of 491. Although the session is not completed, it appears unlikely it will come even close to past sessions’ low marks.

“It has been a pretty anemic session,” agrees Assembly Minority Leader Gordon Hintz (D-Oshkosh). “There isn’t really a lot of interest in addressing and tackling the big issues out there.”

Having a Democratic governor and Republicans controlling both houses of the legislature — or any combination of a divided government — certainly slows things done, say Republicans. But they blame Gov. Tony Evers.

“It’s super important to note that the things that the governor is focused on in his proposals, to a one, they’ve all been things that he knows are going to run into opposition in the legislature,” says Assembly Majority Leader Jim Steineke (R-Kaukauna). “The things that we’ve been focused on, by and large, have broad bipartisan support.”

Assembly Speaker Robin Vos (R-Rochester) says Democrats are being hypocritical: “You know, it’s really interesting, isn’t it, that last session, the biggest criticism was we were doing too much — that we were rushing through and trying to get too much accomplished when we had Gov. Walker. And here we are with divided government where it takes a lot longer to find consensus.”

Regardless of party, it’s clear that the theme that has dominated the legislative year has been a power struggle, starting with the lame-duck session held in December 2018 after Scott Walker lost, but before he left office, in which Republicans stripped Evers and incoming Attorney General Josh Kaul of some of their powers. And those laws are part of an increasingly common situation where much of government policy is playing out in the courtroom rather than on the legislative floor.

It’s worth pointing out that some good things did get done this year. For example, Wisconsin will be able to legally expand its hemp production program, assuming Evers signs that bill as he has signaled he will. Use of the “R-word” to describe individuals with intellectual disabilities was removed from state rules by Act 1.

Necessary things did get done — the life of a tax incremental finance (TIF) district got expanded in the Wisconsin Dells to prompt further economic development.  Additionally, legislators worked in committees, took meetings with lobbyists and constituents and attended public events.

Other measures — such as additional restrictions on Wisconsin’s already heavily restrictive abortion laws — were stopped because Evers has instituted a policy of vetoing most bills that do not have any bipartisan cosponsors.

Above are some good laws — here are a few others to ponder. Keep in mind that these six bills, however needed, represent more than a quarter of the 21 laws made in 2019.

Shilling requested Legislative Reference Bureau data on bills that received a public hearing or were voted on in committee from 2005 to the present. In both Assembly and Senate bills, there was a decline when looking at what has been taken up thus far for the 2019-20 session. For example, public hearings on Assembly bills dropped from 788 in 2005-06 to 210 in the current session. Even with divided government the number in previous years was primarily in the 500s and 600s. And Senate bills being voted on in committee (called executive action) hit a high of 402 in 2009-10, but were just 148 this year.

By far the most comprehensive law passed was Act 9, the mandatory biennial state budget for 2019-21. Republicans removed 131 items from Evers’ proposed budget and wrote their own. Most items removed were deemed to be policy, a typical budget move.

Democrats voted against the budget, Evers made major vetoes — including increasing spending on public education — and signed the budget. And now his veto authority is being challenged in court.

But those items, which included an expansion of Medicaid that would benefit 82,000 Wisconsinites, decriminalizing small amounts of marijuana, raising the state minimum wage to $10.50 over three years and raising taxes on high earners, were also never taken up or addressed separately.  Democratic leaders say the most problematic element is not the low number of session days or the tiny pile of bills that became laws — it’s that necessary work that Wisconsinites say is a priority has been left unaddressed.

“We have an obligation… to do our best to create opportunity, to try to manage the bigger issues that are impacting people, whether it’s groundwater, whether it’s stagnant wages, whether it’s access to affordable childcare, whether it’s access to affordable health care,” says Hintz. “And I don’t think anybody can say that the agenda pushed in the legislature remotely comes close to addressing those issues. In fact, the number one goal appears to be ensuring that Gov. Evers has as few bills passed as possible so that at the end of the day it looks like he signed the fewest number of bills into law.”

Vos responds: “I guess if they want to bring up highly partisan, highly controversial bills and they’re surprised that we’re not going to have massive extensions of welfare or raise taxes or things like that, well, that wouldn’t have been changed, no matter who the governor was.”

On Thursday, Shilling put out her own list of important bills she says the sparse calendar and Republican inaction prevented addressing. These were:

“If you look at the numbers, it was a concerted strategy — they wanted us to be on the floor less than double digits,” says Shilling. “So who stands in the way of progress of doing things like on Medicaid expansion or student loan refinancing, medicinal marijuana, gun safety? Who stands in the way? Republicans are standing in the way because they will not have hearings on bills, they will not move them to the calendar for votes.

“It is paralysis by partisanship.”

Other bills passed one house of the legislature, but not the other. There might have been time to pass those bills into law had fall adjournment not happened so quickly. One example is a series of bills that passed the Assembly in September with bipartisan cooperation to allocate nearly $4 million to combat homelessness. They never were brought to the Senate floor, which means those services won’t be available in the current Wisconsin winter, at least until January and maybe not at all.

This got Majority Leader Scott Fitzgerald a spanking from the typically conservative-leaning Wisconsin State Journal editorial board, which wrote, “Below-freezing temperatures, with lows in the single digits, are predicted for early this week across Wisconsin. That means thousands of homeless people, many of them single mothers with children, will need help getting out of the frigid cold.The Wisconsin Senate, led by Senate Majority Leader Scott Fitzgerald, R-Juneau, doesn’t seem to care.”

But Vos says he is proud of what the Assembly accomplished. “So we have done an awful lot of good things,” he says citing the work of the task forces on clean water and on suicide prevention as “strong bipartisan efforts to actually bring consensus” between the two parties.

Shilling is pessimistic that 2020 will be any better. “We’re getting signals that they’re going to adjourn early in 2020. We’re scheduled to be in session through April, and it looks like we’re going to meet one day in January and one day in February.” 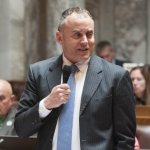 Hintz agrees: “It appears that the Republican playbook is to meet … maybe once in January and just run out the clock. You know, I just don’t think they’re interested in addressing a lot of issues right now.”

Republicans to cut popular Evers’ budget plan,… by Melanie Conklin May 6, 2021
Dozens of GOP lawmakers to reject certifying Biden… by Ariana Figueroa January 6, 2021
Settled into new homes, refugees in US say they are… by States Newsroom Staff June 21, 2021