The Milwaukee public school district is at the starting blocks, ready to run the referendum race in April 2020. Crossing the finish line with a successful school referendum is not a given, but in the past few years, Wisconsin’s school districts have scored an impressive string of victories persuading their local taxpayers to fund both construction and operational programs.

Nevertheless, not every referendum has been successful. In southeastern Wisconsin, small school districts with decreasing enrollments have found voters unwilling to dig deeper into their pockets. Unlike remote rural school districts where parents have few options, these districts are surrounded by much larger districts that offer greater options for parents through the open enrollment program. After its referendum failed, the Palmyra-Eagle school board voted to dissolve its districts; its voters have affirmed that decision.

But what about Milwaukee? Can a large urban district have any hope of passing an operational referendum? After all, it, too, is surrounded by a plethora of suburban districts with much better test scores, lower class sizes, and support programs, many willing to take Milwaukee students. Add to that the extensive number of private schools that underwrite tuition costs through state and local parental choice programs.

We only have to turn our eyes to St. Paul, Minnesota, another midwestern city just over 300 miles away, to find a large urban district that passed an operational referendum in November 2018.

Although St. Paul Public Schools has only half the number of students as Milwaukee, it is a working-class city with a high minority student population and many children living in poverty.

Both Milwaukee and St. Paul have a high percentage of their students attending private and charter schools. St. Paul is, after all, the home of the first charter school in the nation, and about 40% of St. Paul students attend private schools. With such a high percentage of the voters not having children in the public schools, how was St. Paul able to get voters to support a tax increase?

MPS is not running this race alone. Lining up at the starting blocks is a combined referendum of the county and local municipalities to add an additional 1%  to the local sales tax. Adding up the costs, will voters reject one proposal or the other, or, perhaps, even both?

MPS officials are less concerned about the county referendum proposal, however. Republicans in the state legislature have made it very clear that they are unlikely to even permit the county to put its 1% sales tax referendum on the ballot. The school district  needs no such approval for its referendum.

Operational referenda like the one St. Paul went for and Milwaukee is considering are a harder sell because they involve elements not easily seen by the naked eye: staff increases, books, materials, some technology. Construction improvements or new buildings are easier for voters to grasp

How did St. Paul schools do it?

Having local elected officials supporting a referendum can make a difference, according to Don E. Lifto, who co-authored the book School Finance Elections and worked on the St. Paul school operational referendum. Lefto points to St. Paul mayor, Melvin Carter, who enthusiastically supported the referendum, was named an honorary chair of a committee in support, and penned a supporting opinion article in the local daily newspaper.

In 1992, Milwaukee’s mayor, John Norquist, came out against an MPS referendum that ultimately failed. This time around, Mayor Tom Barrett has been noncommittal, and it is unlikely  that he will take major, active role.

St. Paul faced no organized opposition. It is unclear where Milwaukee’s business leaders will stand, but MPS has an active community leader as co-chair of its task force: Peter Feigin, president of the Milwaukee Bucks and Fiserv Forum. Business leaders who might  be inclined to oppose the school referendum may think twice before crossing Feigin.

Both cities have school boards and superintendents who support referendum efforts. Lifto has seen how a single school board member opposed can destroy any positive efforts to go forward.

Engaging the community and building support is critical to Lifto’s model. In Milwaukee the 30  or more members of the task force considering the referendum are drawn from business, education, and nonprofits from around the city. The school system has conducted listening sessions to find out what the Milwaukee community wants. Everyone has been encouraged to fill out an online survey, and more than 25,000 people  have participated.

While such “opted-in” surveys can be effective for engagement, Lifto believes they are “proven to be a very inefficient decision-making tool.” Parents, younger people, decision makers, and teachers are always over-represented in an opted-in survey. About a third of the those who filled out the Milwaukee survey were students, most of whom cannot vote. Referendum opponents are unlikely to participate unless they are really angry.

In St. Paul, Lifto conducted a telephone survey of some 600 adults, those with both landlines or cell service. A representative demographic survey of voters included age, race, parents with children in the public schools as well as those whose children were not, residents of different parts of the city, plus other criteria. Those most likely to vote were targeted.

Participants were asked a range of questions about what they thought of the school system, whether they would support a referendum, and for what educational improvements. Once school officials and researchers analyzed the data, they pretty much knew how to structure the school system message and almost to the penny how much increased taxation the voters were willing to support.

With the survey completed, Lifto advocates using prospective voter lists, knocking on doors, handing out flyers, using social media, and even advertising on radio and TV if necessary. Lifto believes that referendum supporters must campaign the way someone would run for elected office. In Milwaukee, the school board can only give out information, but cannot advocate for the referendum; a separate organization must be created to gather support and get out the vote.

Before the November 2018 vote, Lifto estimated that the chance of passing the referendum in St. Paul looked good, with a possible approval rate of just under 50% to just above 55%. The referendum passed with 66%. The increase will add $475 per year per student. The average home valued at $186,200 will see a tax increase of $135 per year, growing with inflation for 10 years.

How much of a levy increase would Milwaukee taxpayers tolerate? One that closely matched St. Paul’s would translate into only one or two additional teachers per elementary school — certainly nowhere near the extensive needs listed by parents and teachers. A successful referendum of that size would not solve the financial challenges of the district; it would only improve the situation.

Lifto boasts that of the referenda he has been involved in, 88% passed. Sometimes, however, the forces against a referendum are just too great for it to cross the finish line.

In April 2017, he warned the West Allis-West Milwaukee school system that it had less than a 50-50 chance of passing its referendum. It failed. 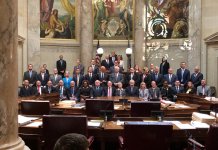 Impassioned debate and limited action in the state Senate 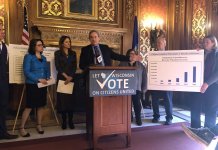 Citizens United and the Big Picture 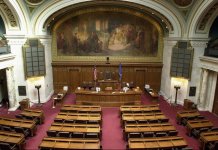 The Assembly dabbles in bipartisanship — then gets derailed

Impassioned debate and limited action in the state Senate

Citizens United and the Big Picture