Years in the making, a plan to change the rules governing large livestock farms is dead — a side casualty of the state Senate’s party-line vote Nov. 5 to fire Gov. Tony Evers’ agriculture secretary.

For rural residents who must put up with odors from neighboring livestock operations, the change might have offered new standards to deal with the problem. Stopping the change allows the owners of those operations to keep running them as they have been.

As a consequence, the state regulation governing those operations will remain the same as it has been since it first took effect in 2006.

On Nov. 1, it was reported that Senate Majority Leader Scott Fitzgerald asked Evers to withdraw his nomination of Brad Pfaff as secretary for the Department of Agriculture, Trade, and Consumer Protection for lack of Republican votes to confirm him, even though Pfaff had served for 11 months and garnered widespread support among agricultural groups across the state. On that same day, Pfaff issued a statement that he was withdrawing the proposed rule on large livestock operations.

Speaking to reporters the day the Senate voted to fire Pfaff, Evers acknowledged that the rule “played a role” in the battle over Pfaff’s position, “and in order to assuage that concern” of Republicans in the Senate, DATCP “pulled [the rule] back at least temporarily.”

DATCP communications director Grace Atherton told the Wisconsin Examiner on Thursday, “After an extensive public input process, the department recognized that we had not reached the level of compromise necessary to ensure successful implementation of the proposal, so we recommended that the DATCP Board not take it up at this time.”

Atherton said that with the Feb. 4, 2020, deadline to implement the revised rule, which requires approval from the governor as well as the legislature by that date, “We do not expect these proposed changes to move forward any further in the rulemaking process.”

The rule, ATCP 51, created a single, statewide standard for large livestock farm sites, including concentrated animal feeding operations, or CAFOs. Local municipal and county governments do not have to require permits for such farms, but if they do, they must follow the rule in setting permit standards.

In Manitowoc County, “It’s reduced conflict quite a bit between farms and non-farm people,” said Jerry Halverson, director of the county’s soil and water conservation department.

The state law authorizing the rule requires DATCP to review the regulation every four years and update it as needed. Technical review panels have been assembled twice before and recommended revisions, but their recommendations have gotten stalled. Now they’ve been canceled for a third time in the face of resistance by agribusiness lobbyists.

The rule change covered a variety of technical points, but the most extensive changes related to odors from farms covered by the regulation. The changes included:

The revisions, drafted in 2017, were based on recommendations from technical review committees that were made in 2010 and again in 2014. They weren’t put to public hearings, however, until this year.

Halverson, who has served on technical review committees for the original rule and in subsequent reviews, said changes were needed to keep up with new information and new technology in farming.

For example, the state rule requires farms operating under the regulation to have manure storage structures that meet federal standards set in 2005 by the Natural Resources Conservation Service, part of the U.S. Department of Agriculture. Since then, “there have been three updates to that standard,” Halverson said — none of which are reflected in the state rule. “If we’re working off 2005 standards, that could be a problem.”

In a letter July 8 to the DATCP board, the farm groups opposed to the proposed rule revision cited the elimination of the odor-scoring system among their criticisms.

Halverson, although he favored the revision, told the Wisconsin Examiner he felt that the odor-scoring system was adequate and that a compromise might have been possible to retain it.

But others favoring the revision contend the scoring system was ineffective.

“One of the difficulties of the score rule, as opposed to the setback rule, was that there were a lot of free points given away,” said Adam Voskuil, a staff attorney with Midwest Environmental Advocates, which also favored the revision while calling for further revisions. Rewarding a farm with a high score “didn’t change how much odor there was. Setbacks are at least a better standard to protect neighbors who have to deal with that odor regularly.”

Supporters of the rule revision pointed out that the recommendations on which they were based have been consistent over several review cycles. “The recommendations that have come from the last two technical review committees were relatively identical,” said O’Connor of the Wisconsin Farmers Union.

In previous letters and press releases, they and other agri-business organizations complained that the rule put out for public hearing this year was not substantially different from a draft in 2017 to which they had objected.

“Livestock farms are already heavily regulated by a host of state laws, administrative rules and a growing number of local regulations,” the Dairy Business Association said in a statement it put out in August just before the public hearings on the rule revision.

But O’Connor said that complaints about the rule obscured the fact that it applied only to a fraction of the state’s dairy farms.

Voskuil, the Midwest Environmental Advocates attorney, said that while large dairy farms protest that they are limited by the regulation, “so are the neighbors that have to deal with the effects of extremely large-scale farms coming into their communities without the ability to regulate them” except through the state rule.

In Manitowoc County, “It’s been a very good program,” Halverson said of the state rule and its companion county ordinance. “But there’s some things that do need to be updated. If we don’t do something to update some things, it will eventually die of old age.” 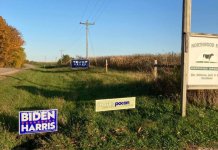 How rural Wisconsin became so divided