Every year at this time I wonder why we, as American Indians, bother to celebrate Thanksgiving. Despite all our social ills and battles with state and the federal government, we always manage to find reasons for gratitude.

Of course, there are native people who reject the holiday altogether. One man once told me he refused to celebrate because it would mean accepting our defeat. I get his point, but there’s more to Thanksgiving than that.

As a boy growing up in northern Minnesota, the holiday was one of the few days of the year where peace reigned in the household. My father was sober. We all helped out with cleaning and doing mounds of dishes—without complaint. We watched football, and the older brothers trudged through the snow to cut down a Christmas tree. Being Indian had nothing to do with giving thanks.

But the innocence of youth is lost too quickly in this world. The reality of racism is so demoralizing. Being called a no-good Indian. Growing up with no connection to your Indian values and language, while not living among your own people. It brings you face-to-face with the brutal reality of looking like an Indian but being expected to live white.

In my early 20s, I found a thriving Indian community at my university, and at the Minneapolis American Indian Center on the south side. In my 30s, as a budding journalist, I got interested in our own news—in combating racism in the city and tribal corruption on the reservation. I began to see and interact with the world through red eyes.

Our small native community newspaper covered stories the rest of the news media ignored, from racist hiring practices at the fire department to county plans to overtake our only urban Indian health care clinic. We provided youth writing internships. We were engaged journalists, grateful to get our paper out onto the streets every month.

Later, when I was teaching at the University of Wisconsin-Madison, my nephew Nick lived with me while attending high school. Each Thanksgiving, I would invite my brothers for the weekend. Before feasting, we would prepare a Spirit Plate for our ancestors, grandmother, mother, and lost siblings. We would set the plate under a tree. A Spirit Plate is to help those who have walked on in their new journey.

This year, as usual, there is much to be grateful for in Indian Country, and much to mourn. As they say, the rains pour on the just and unjust. Wars and conflicts continue. Fires, hurricanes, and mass shootings continue to plague all of the nation’s people.

For Indians, there have been the expected highs and lows. For the first time this year, two Native women are serving in the U.S. Congress. Democrat Sharice Davids, a member of the Ho-Chunk Nation, represents New Mexico and Democrat Deb Haaland, a member of the Pueblo of Laguna Tribe, represents Kansas. Our voices are finally being heard in Washington, D.C.

Sadly, in North Dakota, where Republican leaders suppressed the native vote by requiring identification cards to list street addresses when the majority of Indians only have post office boxes, the courts refused to intervene. The result: a lot of Native American voters were disenfranchised. Less than 100 years have passed since Indians gained the right to vote. Now they’re trying to take that right away.

Native Americans are on the frontlines of fights to protect clean water, especially after a massive Keystone XL oil pipeline spill in the Dakotas, and increasing PFAS contamination in the Great Lakes.

There is another reason to celebrate Thanksgiving. Since 1990, Washington has marked November as Native American Heritage Month. Its purpose is to celebrate the survival and contributions the First People have made to their own communities and to broader society. Feasts, some pow wows, and ceremonies help bring native people to the forefront.

The more pushback Indians face, the stronger our resolve to move toward meaningful change. It’s a new future. And that is something Indian Country can be thankful for this holiday season.

An earlier version of this piece was originally published on The Progressive Magazine’s website. 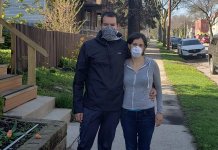 You are only as healthy as I am