WASHINGTON — With only a few legislative days left before Congress adjourns for the year, House Democrats are eager to show that they can legislate while also pursuing an impeachment inquiry against President Donald Trump.

A massive trade deal represents their best shot at showing they can do so — but passing it would hand Trump a major political victory as he heads into the election year.

Blocking the deal, on the other hand, would also exact a heavy political toll. If Congress doesn’t ratify the “new NAFTA,” Democrats may not have a major legislative achievement to point to on the campaign trail next year — which could open them up to GOP charges of inaction and an “obsession” with impeachment.

Especially vulnerable are Democrats in conservative districts with large manufacturing and agricultural sectors, said Bob Salera, a spokesman for the National Republican Congressional Committee. He pointed to freshman Reps. Haley Stevens and Elissa Slotkin of Michigan and Abby Finkenauer and Cynthia Axne of Iowa, as well as to four-term Rep. Matt Cartwright of Pennsylvania.

“That’s the interesting push and pull of the USMCA (United States-Mexico-Canada Agreement),” said Kyle Kondik, managing editor of a nonpartisan political newsletter at the University of Virginia. In addition to the substance of the agreement, Democratic leaders must consider “competing political incentives” as they weigh how — and whether — to proceed.

The House has passed a number of major bills this year, but most are bottled up in the GOP-controlled Senate. But unlike many other bills, the USMCA has strong bipartisan support and the potential to pass both chambers of Congress and win the president’s signature.

Whose deal is it?

Trump and congressional Republicans are actively pushing for it — and marked the one-year anniversary of the agreement on Saturday with a series of tweets pressuring Democrats to ratify it. But political forces may not be on their side, Kondik said. “The incentive over the past few decades has been toward less bipartisan action, particularly if the party [in control] of the House is different than the party [in control of] the White House.”

That has certainly been the case this year. Nearly halfway through the 116th Congress, about 70 bills have been signed into law. That’s far fewer than recent Congresses, which have seen between 300 and 500 bills passed over two-year sessions (and 700-800 during congressional sessions in the 1970s and 1980s), according to a Vox.com analysis.

Trump and leaders of Canada and Mexico signed the trade agreement on Nov. 30, 2018, but it won’t take effect until it is approved by the legislative bodies of all three governments.

Proponents argue the agreement would strengthen trade, create jobs and grow the economy. But critics say the draft deal would allow violations of labor and environmental standards to go unchecked and object to protections for the pharmaceutical industry.

U.S. Trade Representative Robert Lighthizer submitted a draft plan of action to the House in May and has since met with lawmakers to address their concerns.

House Speaker Nancy Pelosi (D-Calif.) said last week that a deal is “within range,” but she said last month that she doubted Congress would be able to ratify it before the end of the year — prompting Trump to respond by tweet that the deal was “dead in the water.”

Moderate House Democrats, meanwhile, are getting “antsy” about the issue, and more than a dozen tried to rally support for a vote on it at a caucus meeting last month, Politico reported.

But labor leaders aren’t satisfied yet. “As I’ve said for months, if the new NAFTA benefits workers, we’d support it,” Richard Trumka, head of the AFL-CIO, a federation of unions, tweeted on Nov. 22, as Congress adjourned for the weeklong recess. “It’s simply not there yet.”

House Republicans are seizing on the delay.

“The fact that Democrats have focused on impeachment rather than getting the USMCA passed is going to be a political death sentence for some members of Congress,” Salera said. “Farmers and manufacturers in these districts need this deal in place.”

Even if Democrats do move forward, GOP candidates are going to remind voters that they had to “wait for Democrats to get their house in order,” Salera said.

“There is an organized effort, I think, by the Republicans in trying to say, ‘Oh, the do-nothing Democrats … they can’t get trade done,’” said Rep. Mark Pocan (D-Black Earth) during a meeting with reporters in his office on Dec 2.  “We’ve been very clear for months with the White House that we have a few concerns about the NAFTA 2.0.”

Those concerns center on environmental and labor protections that have been negotiated and agreed upon by the parties, but that are not part of the agreement.

“Let’s put it in the trade agreement,” Pocan said, “so it’s enforceable—not a huge ask.”

“The other thing we’re asking,” Pocan said, “is take out the big, wet, sloppy kiss to Big Pharma.”

The current deal includes 10-year regulatory data protection for biologics—medicines made using living cells. During the protected period, a competitor seeking to develop a similar product cannot rely on the original inventor’s data. Pocan and others assert that such protections lead to higher drug prices for consumers.

Finally, Pocan said, the Democrats want an assurance that Mexico is living up to its commitment to strengthen labor unions. “They had to pass some laws to make their labor unions real,” he explained. “Right now, they’re kind of company unions and not really worker unions. They did pass the legislation, but I think it’s something like 700,000 contracts have to be rewritten out there. So that’s going to take some resources and time. … We have to make sure that’s happening, that they live up to the letter of the law they passed. Because if you don’t do that, you’ll still give a reason for companies to have jobs bleed out of our country.”

All of these issues should be easy to resolve, Pocan said: “You take care of those things. You probably have 390 votes.”

The Republicans are “slow-walking” the trade deal, Pocan added, dragging their feet on addressing the House Democrats’ concerns.

“For all the whining, they say that we’re not passing it, they just want us to pass something that they initiated under Paul Ryan,” he said. “Last time I looked, Nancy Pelosi is the Speaker and Nancy is a little different than Paul Ryan. You have to expect the different majority is going to have some different priorities.”

Not a magic bullet for farmers

As for the pressure to get the deal done, Pocan reeled off a list of other concerns for Wisconsin farmers, including a wet spring and fall tied to climate change, historically low milk prices, Chinese tariffs on corn and soy, a trade deal with Japan that is unfriendly to US dairy producers, and Trump administration policy that has been hard on biofuel producers.

“It’s not like this is a magic silver bullet for the agricultural community,” he said, adding “It’s certainly part of something that has to happen, but why not do it right? And we’re actually not that far apart.”

Moving forward, at least on the deal in its current form, may not be worth it to Democrats, according to Tamara Kay, a trade expert at the University of Notre Dame and author of “Trade Battles: Activism and the Politicization of International Trade Policy.”

“I don’t [think] the Democrats have a lot to gain if they sign off on an agreement with inadequate labor and environmental enforcement and that will raise the price of medicine for all,” Kay said. If Congress ratifies the USMCA, Trump will claim “total and complete credit” for it. “He’s going to [say], ‘Democrats couldn’t do this for 25 years, and I did it. Look what I did for workers.”

And, because Democrats will have signed off on it, he will be able to claim he replaced NAFTA, a major campaign promise, she said. Along with building a wall on the southern border, Trump won in part by promising to bring back jobs lost by bad trade deals in the past.

“If it doesn’t get passed, House Democrats will be able to say it wasn’t for lack of trying to get real protections for workers,” Kay said. “They and Democratic presidential candidates will be able to attack Trump for failing to add real teeth to NAFTA — an issue with widespread bipartisan support. They’d say he couldn’t even make improvements when he had all of this leverage — when he had a willing counterpart in Nancy Pelosi, and [when] Democrats have wanted to replace NAFTA for 25 years.” 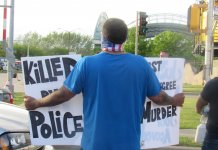