During her 45-minute speech on the campus of the University of Michigan Monday, Angela Davis urged 3,500 attendees to push back against the prison industrial complex, recognize the negative effects of climate change, speak out on Israeli government discrimination toward Palestinians, and participate in the Nov. 3 election.

“We owe it to the planet to guarantee as current occupants that the person in the White House is removed [President Donald Trump],” Davis said to a roaring capacity crowd. “No matter how you might feel about the effectiveness of electoral politics — and I must say that I’m a person who doesn’t believe that it is always possible to express radical politics within the electoral realm — however, we all need to participate in the electoral arena because that determines the space that we will have to be able to do the organizing that will move us into the future.”

Davis’ Martin Luther King Jr. Day keynote address was co-sponsored by the university’s Office of Diversity, Equity & Inclusion, Michigan athletics department, and the Stephen M. Ross School of Business. The theme of the 2020 MLK Symposium was entitled “The (Mis)Education of US.”

Robert Sellers, U of M vice provost for equity and inclusion and chief diversity officer, called on participants “to uplift the narrative of those who are traditionally marginalized or left out, and in doing so emphasizes the rich variability within the groups that makes us all human.”

The 75-year-old Davis, who became a nationally recognized activist during the 1960s as a leader of the Communist Party with close ties to the Black Panther Party, did not offer support for any particular 2020 Trump challenger. She made references to Trump, but refused to say his name.

“What is his name?” Davis said to the audience’s laughter. “Actually, I’m not going to pronounce his name. In the African tradition, to speak a name is to give it power.”

Davis, a distinguished professor emerita in the departments of history of consciousness and feminist studies at the University of California, Santa Cruz, also made mention of late Detroit activists Grace and James Boggs, as well as Democratic U.S. Rep. John Conyers.

In 1969, Davis was removed from her teaching position in the philosophy department at the University of California Los Angeles (UCLA) as a result of her social activism and her Communist Party membership. The following year, she was placed on the FBI’s “10 Most Wanted List” after being charged with purchasing a shotgun used to kill a Marin County, Calif., judge. She was acquitted in 1972.

Davis pointed out that she had met King as a 12-year-old girl in her hometown of Birmingham, Ala. She said that King visited U of M in 1962, during the height of the civil rights movement.

Davis praised King as the leader of the movement, but also pointed out that Black women were unsung heroes during the 1950s and ‘60s, toiling as domestic workers and church and civic organizers, particularly during the 1955 Montgomery, Ala., bus boycott.

Similarly, women of color throughout the world today, she said, must be recognized for their contribution to society. Davis noted the National Domestic Workers Alliance (NDWA). Founded in 2007, NDWA works for respect, recognition, and inclusion in labor protections for domestic workers, the majority of whom are immigrants and women of color, according to its website.

“Domestic workers do the work most precious to us,” Davis said over thundering applause. “They care for our homes and our loved ones. But they don’t have the basic rights and dignity that they deserve, even in the year 2020. Of course, this is an issue that has global implications.”

This story first appeared in the Examiner’s sister publication, the Michigan Advance 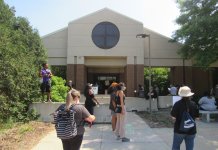