In a manuscript I’ve tried to sell — agent rejections piled high — a subplot involves a time in the near future when a wildfire consumes Prescott, Arizona, killing hundreds.

This shocks the conscience of the nation so much that an influential climate-change denier in Congress changes his mind and his heart. He becomes a leader in the fight against global warming, earning him, among his many accolades, Time Magazine’s Person of the Year.

This work is a novel, so, by definition, fiction. Just how fictional, however, comes into stark relief owing to a few relatively recent events.

In late 2018, the Camp Fire in California consumed 153,336 acres and caused the deaths of at least 85 people.  Also among the casualties: the town of Paradise, population 26,218, according to the 2010 Census. This community where I spent a lovely evening long ago was pretty much destroyed. A faulty transmission line is thought to have caused the Camp Fire blaze, which also destroyed some 18,800 structures. A drought fueled the damage, part of a climate-change pattern. Or so said the experts.

Now  Australia is on fire. This, too, has been attributed  partly to climate change. More than twenty are dead, thousands displaced, and millions of acres of land have been destroyed. Among the casualties are an estimated 1 billion animals.

Predictably, all this has prompted a sea change in attitude: Once-grudging climate-change deniers have been transformed into believers, there has been an outpouring of heartfelt regret that it took  so long to recognize the obvious and there is now underway a strenuous bipartisan push in Congress to combat greenhouse gases.

Just kidding.As any astute observer of current events will recognize, the preceding paragraph is also fiction. Yes, my novel got the wrong location for the massive fire, but the United States has now had  a community destroyed by fire,, though one less populous than Prescott.

Here’s where the real fiction kicks in. Near as I can tell, no significant  number of minds have been changed by an actual U.S. town — it shouldn’t matter what size — cauterized off the landscape, not to mention large swaths of a  continent ablaze down under..

Fires are as robust and devastating – or as containable – as conditions permit. Prolonged dry conditions produce the tinder that allows wildfires to run amok. Absent those conditions, fires are more easily combated. This is true whether the initial spark comes from human carelessness, as Smokey the Bear warns us (I don’t recall warnings about faulty transmission lines, though) or an act of nature —lightning for example.

What the experts say was at work in both California and Australia were precisely the conditions created by climate change – dry weather and dried vegetation.

As a native son of California, I can attest to wildfires as an enduring feature of life there. “Little Mountain,” the hill near where I lived in San Bernardino, was always scorched, owing to those wicked Santa Ana winds.

It’s worse now. National Geographic notes that over the past century, California has warmed by about 3 degrees Fahrenheit, which is more than the global average.

“Hotter air draws water out of plants and soils more efficiently than cool, leaving the trees, shrubs, and rolling grasslands of the state dry and primed to burn,” National Geographic explains.

National Geographic added, “Fifteen of the 20 largest fires in California history have occurred since 2000. And since the 1970s, the amount of area burned in the state has increased by a factor of five.”

Any major wildfire – or earthquake, for that matter – near my two brothers who remain in Southern California prompts the following call or text: “Just checking to see if you’re OK.”

Such communications are sure to become more commonplace for more of us. Fires, of course, are not the only scourge unleashed by climate change. NASA addresses some. Among the effects, depending on where you live: rising temperatures and accompanying droughts and heat waves; wetter winters and springs and the flooding these produce; stronger and more devastating hurricanes; sea levels rising 1 to 4 feet by 2100; and Arctic waters substantially free of ice. The fallout for fisheries, crops and wildlife and ecosystems generally will be even more devastating if the factors contributing to climate change remain unchecked. This means reducing the amount of heat-trapping gases emitted into the atmosphere.

And Wisconsin is not spared, the flooding in Dane County in August 2018 providing one vivid lesson.

“The decades ahead will bring changes in climate much more profound than those already observed; in some cases those changes could occur more rapidly than plant or animal species can adapt,” concludes  a 2011 report, “Wisconsin’s Changing Climate: Impacts and Adaptations.”

Anyone with the eyes to see can discern unfolding in real time what the climatologists foretell. But with each foreboding report and each new disaster, the folks who pull the levers of policy and regulation simply refuse to see. If they do this out of ignorance, it is of the willful variety given the amount of data and scientific consensus available. And too many of us who consume unwisely are culpable as well.

What magnitude of disaster will it take to change minds? Much of a continent ablaze is not doing it. Loss of a U.S. town or two hasn’t done it either.

So what’s it going to take? A more populous city consumed by fire? A major U.S. city, parts of a U.S. state or an entire Pacific island nation underwater? Mass migration forced by dwindling resources and the strife this will cause? How many lives have to be lost?

In my manuscript, that prominent climate-change denier sees the light. Perhaps I should start pitching this to agents as fantasy instead of  mere fiction. 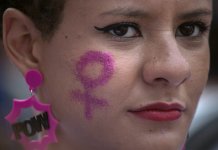 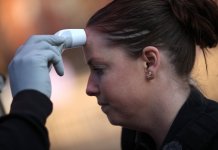 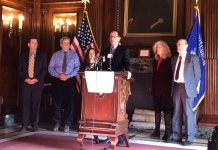