The Wisconsin Black Caucus kicked off Black History Month in the Capitol with a combination of celebration and criticism, reminding African American people of the struggles generations  have endured since first being brought and sold in the New World.

“For so long, black history has been a history of insularity,” said Rep. David Crowley (D-Milwaukee), one of several African American representatives who spoke during a press conference in the Capitol on Monday morning, Feb. 3. “Whether it’s through legal or social mechanisms, our community has been continuously negatively impacted. This instilled a belief that our success, or failure, didn’t matter to the wider world. At the same time, our community has withdrawn into itself. It’s understandable, but it only furthers the divides between us and the rest of Wisconsin.”

Today, Wisconsin has not shed its reputation as one of the worst places in America to raise a black child. Incarceration rates for working-age African American men are some of the highest in the country, despite the prisons having long ago reached capacity. Milwaukee, described as a political and economic engine for the state, is also known as one of the most segregated American cities. If you’re born in Milwaukee, your future may very well be determined by what zip code you were born into.

“We can decide whether we want to continue to allow these gaps between different communities, or if we want to build those bridges and stop allowing small differences to divide us. This, of course, is extremely difficult when we still see continued vicious attacks directed at our community, and its disenfranchisement,” said Crowley.

“Black History Month is a time for celebration and reflection,” said Sen. Lena Taylor (D- Milwaukee), “we celebrate our rich history, all of the triumphs and obstacles  that we have overcome. We are a resilient people. We reflect on the struggles of our past, and the times of trial, and the days where we could not see the light from the darkness of the perils which lay before us.”

While looking to the struggles of the past, representatives also saw their echoes in the present day. “When many forces seem determined, and they are determined, to divide us with hate, we must be more diligent than ever before to celebrate our differences and to recognize that diversity makes us stronger, and smarter, not weaker,” said Gov. Tony Evers.

Evers noted that despite the end of slavery, and the success of civil rights movements for African Americans, systematic discrimination remains. “Black disenfranchisement continues to exist in our state and our country through voter suppression tactics,” he said. “One of those tactics is redistricting, or gerrymandering, which often disproportionately affects people of color.” People today are challenged with not only making voting accessible, Evers continued, “but that we have a fair count during the 2020 census, and that we use that count to draw fair, impartial maps. We must ensure that every Wisconsinite, regardless of zip code, has the same voice and viability.”

The tougher on crime bill package, recently introduced by Republican lawmakers, was seen by some as another echo from the past. Rep. Kalan Haywood (D- Milwaukee), Wisconsin’s youngest lawmaker at 20 years old, called the package “problematic.” “We should talk about being more proactive than reactive,” he told Wisconsin Examiner.

Rather than investing in initiatives to lock people up once they’ve committed crimes, Haywood feels funding is much needed for  violence prevention and education, “things on the back-end,” as he put it. Looking more broadly at his place in the big picture, as the youngest representative in the nation, Haywood recognizes, “a lot of people came here before me.”

Rep. Sheila Stubbs (D- Madison) was also in attendance, having just recently introduced legislation to address “race out of place police calls,” and grilled the tougher on crime bills over the prior couple of weeks. Stubbs, the first African American elected to represent a Dane County municipality, said, “History isn’t easy to make, and it’s not easy to break history. But I broke 170 years of history and I stand here today on the shoulders of a long list of greats who came before me. I resolve to follow the footsteps of those greats.”

Stubbs said she hopes her colleagues in the Capitol , and her people across the state will continue to overcome. “We have the worst racial disparities in the nation, in the country. Wisconsin is the absolute worst place to raise a black family but I stand here today, with my black caucus colleagues and our governor, to say we’re going to change those disparities so black folks can thrive and play and live and work, in a state which they can say is their state as well.” She applauded the introduction of an Office of Equity and Inclusion in Dane County, and other initiatives which, “continue the work of heightening awareness,” said Stubbs. “We collectively will seize the opportunity, and create real change.”

Rep. Crowley echoed this resolve. “The fight must go on,” he said. “At the end of the day, we have to think about what we owe each other. We owe it to each other to build these bridges. We owe it to our friends and family and neighbors to build a community that takes care of everyone. We owe it to each other to come together for the good of all people. So let’s celebrate the start of Black History Month by focusing on black future. The future we want for our children is the future we want for every child. And the future can only be built by building it together.” 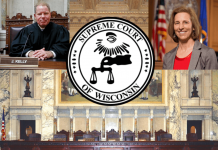 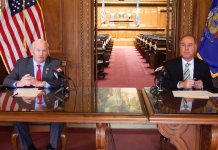 State surplus: Now you see it, now you don’t