‘Tougher on crime’ bills pass despite calls for reform

“Police Crime Scene Tape” by JobsForFelonsHub is licensed under CC BY 2.0

The “tougher on crime” bill package reached an emotional peak in the Capitol during the Assembly floor session Tuesday, which resulted in the bills being passed. Democrats sparred with Republican proponents of the package for hours, some saying the bills both target specific communities — namely Milwaukee — and take Wisconsin’s criminal justice system back to the past.

“This is the last gasp of the tough on crime era in the state of Wisconsin,” Rep Evan Goyke (D- Milwaukee) declared repetitively in a loud, impassioned voice. “That’s because there’s a better, more effective, more efficient way to run our criminal justice system. In the last several years, 45 states around this country have enacted some form of criminal justice reform policy to reduce their prison population.” 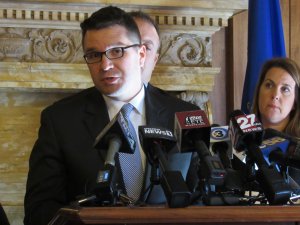 Similar criminal justice reform initiatives nationwide have shown promising results, whether in red or blue states. Reforms to incarceration policies in Louisiana resulted in a 7% drop in the state’s re-incarceration rate over nine months in 2018. Like Wisconsin, Louisiana has a state government that is divided along party lines. Other red states including Texas have taken similar steps to reduce their prison populations. Wisconsin, Democrats argued, is increasingly becoming an island of antiquated criminal justice policy.

Despite the bills’ authors repeatedly bringing up Milwaukee as their prime example as they argued why tougher on crime policies are needed, Goyke presented a different perspective. “The gentleman from the suburbs of Milwaukee got up earlier to talk about my neighborhood … because crime is concentrated there. But you need to know the truth about what is happening in Milwaukee.”

Goyke stated that from 2017 to 2019, crime dropped 25% in Milwaukee. “What are the ingredients for this success story in Milwaukee?” The representative asked his colleagues across the aisle. “It had nothing to do with tougher penalties, and automatic revocations, or cash bail. He credited the shift to city organizations like Safe And Sound, and Milwaukee’s Office of Violence Prevention conceding, “Is there work to be done? Yes.”

Furthermore, Goyke invoked the numerous advocacy experts, criminal justice activists and others who’ve voiced their concerns about the bill package in recent weeks. In comparison, when speaking of Assembly Bill 805 — which recommends parole be revoked if a formerly incarcerated person is charged with (but not convicted of) a crime — just four people spoke in favor of the bill. “Two were the authors of the legislation, one was the police chief from West Allis, and the other was a union leader from the police association in Milwaukee. Every other person in attendance was against,” said Goyke. “The people want something else.”

Nevertheless, Republicans doubled down on their case for the bills. Rep. Joe Sanfelippo (R-New Berlin) started off by declaring, “It’s true, I am going to be turning another year older in the next two weeks but I’m not on my last gasp.” He stated that opponents of the bills “conflate” the issues at hand, particularly the idea of giving people second chances in the criminal justice system. “I don’t think there’s a person in this room who’s … against giving anybody a second chance,” said Sanfelippo, stressing that the probation revocation bill focuses on “repeat, violent offenders.”

Like some of his Republican colleagues on the floor, Sanfelippo read details of cases of violent crimes in Milwaukee, some committed by people who were out of prison on extended supervision. Sanfelippo also suggested that certain arguments against the bill on the process of revocation would result in a major financial burden for the state.

Since the bills were introduced, Democrats have been warning that they would necessitate building two new prisons the same size as a large facility in Oshkosh. Wisconsin’s correctional facilities are already overcrowded, and continually growing in population. Sanfelippo’s stance on even these concerns are made clear. “All of these bills are drawing a distinction between those of us that believe that innocent victims and families should be considered into the equations, and others who only want to place cost and criminal rights over public safety. It doesn’t matter what the cost to that incarceration is.”

Rep. David Bowen (D-Milwaukee) noted that Sanfelippo appeared “very quick to find value in spending $11 million on increasing costs in the Department of Corrections. Plus you add that with about $700 to $800 million in the cost of a new prison. Roughly you’re looking at $900 million to over $1 billion that we would newly spend because of this measure.”

Others across the aisle also weren’t convinced by Sanfelippo’s numerous individual stories, and references to Fox 6 investigations. “This bill is a total farce when I just sit here and I hear Milwaukee, Milwaukee, Milwaukee,” said Rep. David Crowley (D- Milwaukee). “That is a slap in the face, especially when many of you know that the crime in Milwaukee has gone down.”

Crowley asked his Republican colleagues, “If we are really concerned about the gun violence in Milwaukee why aren’t we focusing on background checks? Don’t sit here and tell me that no matter what the cost is, we have to make sure it’s safe. You know, we could invest in education and we could make sure our future’s totally safe. We could ensure that we’re putting more money into municipalities so that they can actually fix their local issues. But we’re not doing that. We’re having a discussion about a bill that is only here to really instill fear in the rest of the community that does not live in the city of Milwaukee.”

After the bills passed, other Democrats, some from Milwaukee, echoed that point. Rep. LaKeshia Myers (D-Milwaukee) said the bills were, “despicable and are nothing more than political pandering and fear mongering.” Myers added that, “passing legislation that would send more youth offenders to Lincoln Hills and ending the compassionate release program for aged and chronically ill prisoners are steps in the wrong direction.”

Bowen expressed his discontent at the “incarceration-first approach” taken by the tougher on crime team. “Unfortunately, an incarceration-only approach does not work. And it’s proven that it does not work.” With all the talk of victims, Bowen found it interesting that another group victimized by Wisconsin’s incarceration system is not taken into account.

“Actually I have the story of millions of victims,” he said. “There are approximately 55- to 57,000 residents in each and every one of our districts. And they keep getting robbed of the future of this state that could reduce the costs of incarceration so we can invest in things that actually matter.”

As the discussion continues, despite the Assembly passing the bills, Wisconsin residents calling for criminal justice reform continue to wait. As Bowen sees it, they’re being “held up at gunpoint,” and he knows who he holds responsible. “That culprit’s name is the status quo. And I’m tired of being stuck up, robbed, cheated by the status quo.” Bowen urged a different direction, despite the fear and anger that fuel pushes for tougher on crime reform. “I think our communities are waiting on that kind of change.”

Wisconsin is faced with a choice, explained Bowen. “We can continue to stick with the status quo, and let the status quo continue to rob every taxpayer around the state that is very tired of seeing us have these old debates over and over again without progress. Or, we can rise to the occasion and say, ‘What does work?’”

‘Tougher on crime’ bills pass despite calls for reform