In the midst of the COVID-19 pandemic, nearly half of county circuit courts, one tribal court and the state Wisconsin Supreme Court have canceled non-essential activities and undergone a major slowdown of the justice system.

In the circuit courts, essential activities include any hearings that are required by state law to happen within a certain amount of time. In the state’s appellate courts, filing deadlines were delayed and the Supreme Court said it wouldn’t take up any non-emergency motions as it postponed oral arguments scheduled for the next several weeks.

Many court proceedings, especially matters such as civil claims that don’t have a time limit, will be moved to telephone or video conferencing if possible. But around the state, courts are dealing with the unique challenge of putting the brakes on a machine meant to always be churning.

“I’m confident that we’re able to accommodate whatever challenges it presents,” Randy Koschnick, director of state courts, says of the new reality triggered by the global coronavirus pandemic.

Each county has set different local rules to handle the crisis, but Koschnick says around the state the highest priority is “liberty interest” cases. A liberty interest case would involve a defendant in custody in jail waiting for bond or a trial, explains Koschnick.

“The constitutional provision of due process is our highest priority, that and health and safety,” Koschnick says. “We’re prioritizing cases that have constitutional implications. We’ve largely been able to do that.”

In some counties, finding that balance between a person’s rights and the health of the community meant delaying almost all court functions. Dane County Circuit Court issued an order declaring that the pandemic is good cause to reschedule preliminary hearings and jury trials beyond the time period required by state law.

But other circuit courts have said court proceedings with time restrictions will go on as scheduled — including jury trials, which present a number of logistical challenges for maintaining social distancing practices.

Criminal trials in the time of COVID-19 will require some creative problem solving, according to Koschnick.

He suggested moving trials into county board rooms, which are typically larger — allowing jurors to sit several feet apart — and have the technical capabilities a trial needs. This is something he did when his courtroom was being renovated, he notes.

He also said the jury could move out of the box and into the gallery — while a bailiff separates them from the public — to prevent close contact.

As the administrator for the state court system, Koschnick is responsible for keeping the circuit courts running as the world attempts to contain the virus. To make it easier for the counties, Koschnick says he’s been working to increase video capabilities for every state judge.

The conferencing tools will allow lawyers and defendants to join from where they are, says Koschnick.

“I’m purchasing software for every judge in the state so they have options,” Koschnick says. “Theoretically lawyers could appear from where they are. I’m exploring as many options as I can to allow court to proceed.”

But while Koschnick says he’s working out logistical concerns, Catherine Dorl, director of the trial division in the state public defender’s office, says the fundamental fairness of the justice system is being compromised.

“I’m sure we can all come up with logistics that can ensure social distancing, but this doesn’t take into consideration if you’re on trial and your freedom is in jeopardy, do you want jurors hearing your case that have their own life and death worries?” Dorl says. “I don’t know anyone who isn’t concerned about their job, how they’re going to pay rent, if their parents will be okay, access to healthcare if they do contract the virus. Logistics can be worked out, I still have concerns about the fairness of pushing trials under these really unprecedented circumstances.”

Dorl says it would even be difficult to find jurors willing to report to duty if summoned. Some courts have been discovering that reality.

In Brown County, the emergency order states “the courts cannot safely summon jurors … in a manner that does not expose potential jurors and other involved personnel to substantial health risks that are unacceptable.”

But other counties are handling jury duty as if it were business as usual. Chippewa County is only excusing potential jurors if they or their family member are sick or have tested positive for COVID-19. Otherwise, if a juror is summoned and does not go to court, “current protocols for handling failures to appear will take place.”

Every decision has  costs and benefits, Dorl says. Delaying trials can also have a negative effect on justice.

“There’s the right to a speedy trial obviously, your right to a meaningful trial can degrade with time,” says Dorl. “Witnesses lose memories, witnesses disappear. In the long run, this is going to play out in ways we probably can’t anticipate.”

Trials aren’t the only part of the justice system being affected. Some of the unintended consequences, according to Dorl, are actually things reformers had been arguing for before the crisis.

Counties are changing how the bond process works to limit the number of people held in the jail. Sauk County’s order allows judges to modify any cash bond set at $1,000 or lower, essentially releasing non-violent offenders who were only in jail because of an inability to post bail.

“We’ve been working on bail reform before this — we’re holding more people in jail than we need to be because they can’t post bail,” Dorl says. “We’ll have to see what happens to these people when they’re released if they come to court. That will have to play out with time. Optimistically, if this works, it should keep working even after this is over.”

Outside of the trial process, the Supreme Court order Tuesday delayed the already slow-moving appellate process. Joseph Ehmann, of the state public defender’s appellate division, says his office can quickly adapt to a crisis like this in ways the trial division cannot.

The largest concern, Ehmann says, is maintaining the ability to communicate with clients. For now, prisons are still open to attorneys, but if necessary there are secure phone lines available.

“Ultimately, we do have to consult with our clients,” Ehmann says. “We will make do and presumably, potentially this will end at some point. In the meantime we will make sure our clients are heard and we get what we need to do the appeal.”

Oral arguments in front of the Supreme Court scheduled for March 30, April 1 and April 20 are, for now, still expected to proceed. Circuit courts have delayed non-essential hearings for at least the next month, with some counties already delaying court functions until June. 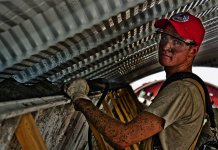