Unemployment claims have exploded in Wisconsin, spiking above 100,000 new claims over the past nine days and making national news as businesses shut down and mass layoffs have been announced.

On Monday — even before the emergency Safer at Home order — unemployment claim numbers hit a new high of 21,250 new claims filed, the highest number since the start of the COVID-19 outbreak. There were 1,412 claims on the same date in 2019.

The silver lining for people applying for unemployment is that legislators from both parties, and the governor, are moving closer together on a measure to suspend a one-week waiting period before unemployment benefits can be collected during the COVID-19 pandemic.

Republicans implemented the waiting period in the budget in 2012, over angry  objections from Democrats. Gov. Tony Evers attempted to repeal the measure in his 2019-2021 state budget, but Republicans removed the language.

Now Republican legislators have drafted a bill to waive the one-week waiting period — and the author of the Senate bill is one of the more conservative Senate Republicans, Sen. André Jacque (R-De Pere). 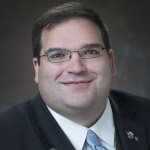 “It really isn’t a partisan issue in the current circumstance,” says Jacque, indicating that leaders in his caucus have given him some positive feedback. “I think it’s also important to make sure that we’re talking about what some of the potential issues are that need to be solved.”

“It’s a sign,” says Assembly Minority Leader Gordon Hintz (D-Oshkosh). “The bill is not written exactly the way I might have wanted, but it is a sign. Then-Rep. André Jacque voted to instate the one-week waiting period, so it’s encouraging to see he’s supporting getting rid of what he imposed on the state of Wisconsin. I don’t think this is a time for purity on these things.”

The bill would not repeal the waiting period as Hintz, Evers and other Democrats want. But it would allow the Department of Workforce Development secretary to suspend the one-week waiting period for up to a year in response to a declared state of emergency.

“Even though I support repealing it, I recognize it’s contrary to their point of view in a normal time,” says Hintz. “If that’s what it takes to get done, let’s do it.”

Jacque says the legislators who have signed on as sponsors so far are “pretty evenly split among Democrats and Republicans.”

Speaker Robin Vos (R-Rochester) says he’s asked the Legislative Fiscal Bureau to look into the potential impact on the unemployment balance that would be caused by suspending the waiting period to make sure the fund remains solvent.

“If we made a decision for a temporary suspension, we’ll do it in a way that allows folks to get their benefits and not have a massive tax increase on many of the same small businesses,” says Vos. “I’m hoping that once we get that analysis, we would do a small short-term suspension to get us through the crisis.”

As the owner of a small popcorn business, Vos says balance is his end goal.

“There was an article in the paper today that I read that basically showed that most workers — I think it’s almost a third — live paycheck to paycheck,” adds Vos. “We know that on the business side, it’s similar. I think it was about half only had enough to operate for one to three months or less. So the longer this order goes, the more businesses are never going to get the chance to reopen. And that is really my fear.”

Jacque says the reasons the waiting period passed in the first place, are no longer the top priority in the current environment.

“That’s built on not wanting to incentivize businesses to use layoffs as part of their business model,” says Jacque. “And there are a few other reasons why the provision might exist under normal circumstances, but now when clearly people are being laid off as a result of a health crisis and its response, this is certainly something we can do.”

Pieces of the job-loss response

“I am urging the Wisconsin State Legislature to quickly act and repeal the one week waiting period for UI benefits, so UI funds can quickly get to affected workers to support those households and our communities,” said Evers at the time of the order.

“This past week we have seen an unprecedented shutdown of businesses across our nation. The impact on Wisconsin workers is staggering. Nearly 63,000 Wisconsinites filed unemployment claims in the past week. According to preliminary figures by the Wisconsin Department of Workforce Development, from Sunday through Friday a total of 62,828 claims were filed. That is 12 times the number of claims the state received during the same period in 2019.”

Jacque and Pronschinske note that Massachusetts recently approved the same suspension on a bi-partisan basis. Something Jacque hopes will happen whenever legislators return to session, in chambers or virtually.

Senate Majority Leader Scott Fitzgerald (R-Juneau) has been checking in regularly with the unemployment benefit division to make sure it has the staffing it needs to take on all the additional inquiries. “They’re very sensitive to that, so I’m not expecting any type of delay. Sounds like they’re putting those personnel in place.”

On Wednesday, DWD job centers around the state closed down in compliance with the governor’s “Safer at Home” emergency order, although services for the public remain available online and via telephone.

Hintz sees ending the waiting period as the “most obvious thing we can do” given where the economy is heading. But he warns that the end of the emergency order will likely come far before the end of the economic crisis.

“I do think that’s an action we should take in the period of the crisis,” he says. “But it’s hard to know how long it will be needed, as the economic hardships are expected to go on longer than the emergency period.”

COVID-19 is bringing legislators together around this issue