Senate President Roger Roth (R-Appleton) wants the state Senate to go on record acknowledging, “that the Communist Party of China deliberately and intentionally misled the world on the Wuhan Coronavirus.”

To do so, he put together a resolution stating that it is “necessary and prudent to combat the spread of misinformation propagated by the Communist Party of China.” It begins: “Whereas, the State of Wisconsin is currently in a state of emergency due to the rising spread of the Coronavirus that originated in the Wuhan Province of China…”

Roth says studies show that if China had “acted responsibly,” the overwhelming majority of COVID-19 cases would have been prevented. He sees the resolution as doing his part to find what he calls a possible silver lining in the current crisis.

“I think this is that moment now, where the Communist Party of China is stripped naked, and everyone can realize what they are willing to do to their own people. And just like Chernobyl led to the downfall of Communist Russia, my hope is that this will begin to bring an end to the Communist Party of China, so that the great people of China can rise and live in freedom and liberty like we do here in the west.”

Roth adds an additional practical concern he has: ensuring that the world will respond swiftly if a similar health threat arises in the future, when pandemics could be more the norm than the exception. “That’s really at the crux of this here,” adds Roth. “It’s stuff for us to reassess and learn from because … if that’s the case, we have to make sure that when these things begin that nations handle them responsibly.”

The genesis of this resolution is quite a story. Roth received two emails from Chinese consulate staff asking that he pass a resolution they wrote supporting China’s battle against COVID-19 praising China’s response to the virus. When he received the first one dated Feb. 26, he saw it was from a hotmail account and disregarded it as a prank.

Then on March 10, 2020, he received a follow up, and Roth says he had his staff start digging, reaching out through government channels. They were able to confirm that the email requests were legitimate —  and they were told Chinese diplomats routinely use private email accounts because they are faster.

“Then I got mad, because that’s when [COVID-19] cases started cropping up here and you saw the problem exacerbated as we started to learn the truth,” Roth says. “I just sent them back a one-word response. I said ‘nuts.’

The text of Roth’s resolution demonstrates how angered he was by the request — it includes bold type, italics and underlining for emphasis saying the resolution was “written by the Chinese Consulate.” It goes on to state that the original request included “propaganda and falsehoods such as: ‘China has been transparent and quick in sharing key information of the virus with the WHO and the international community, thus creating a window of opportunity for other countries to make timely response.’”

In his resolution, Roth lists examples of “a continued pattern of human and natural rights abuses” by China including the treatment of Tibet and Muslim Uyghurs, the one-child policy (and abortions it causes), harvesting organs, forced sterilization, the Tiananmen protests, currency manipulation, intellectual property theft and restricted market access. He also denounces President Xi Jinping’s consolidation of power.

Resolutions are typically commemorations or other ceremonial items introduced in the Legislature — this is the seventh one from the past session. For example, the three before this one were: Changing the orders of business on the daily calendar; Proclaiming September 2019 as Workforce Development Month; and Calling for action to protect Christians in Nigeria.

Xenophobia against the Chinese

Roth’s resolution comes as the United States has seen an increase in incidents of hate speech and acts of violence against  Asian Americans and people of Chinese descent.

A United Nations human rights report from March 30, 2020, states that COVID-19 is stoking xenophobia, hate and exclusion, according to minority rights expert Fernand de Varennes, the UN Special Rapporteur on minority issues. He reported that politicians and groups are exploiting fears around the disease, which was leading to “an alarming rise in verbal & physical abuses against Chinese & other minorities.”

“COVID-19 is not just a health issue; it can also be a virus that exacerbates xenophobia, hate and exclusion,” said de Varennes.

Roth says he knew that people would hear that a senator has a resolution condemning China and might take it the wrong way. So “on several occasions I make the distinction between the Chinese people and their oppressive government. I think it’s important that people know that. People are absolutely wrong and they are misinformed if they are taking their frustrations out on Chinese Americans or Asian Americans.”

“I want to stand in solidarity with the Chinese people to be able to live in freedom.”

To make this point in his resolution, Roth wrote:

“Whereas, the Chinese people are a great people, and heirs to one of the greatest civilizations in human history, held hostage by a brutal and oppressive regime these past 70 years …”

It also adds  that Wisconsin stands “in solidarity with the Chinese people to condemn the actions of the Communist Party of China.”

The two final piece of the resolution are what the state Senate would vote to resolve:

“That the Wisconsin Senate acknowledges that the Communist Party of China has deliberately and intentionally misled the world, suppressed vital information on the statistics and spread of the Wuhan Coronavirus both domestically and abroad, allowed millions of individuals to travel outside of the province and country despite clear warnings that the virus could be transmitted person-to-person, and engaged in active suppression and persecution of individuals looking to truthfully discuss information related to the Coronavirus, which has led to a global pandemic the likes of which has not been seen for generations” and

Roth introduced this resolution on March 26 and referred it to the Committee on Senate Organization where it sits available for the Senate’s action when it returns to conclude its regular session business, although no date has been announced. (Next week’s extraordinary session called by Senate Majority Leader Scott Fitzgerald is likely to be limited to the COVID-19 relief bill.)

“I think this really can be the catalyst by which those great people are allowed to rise again, adds Roth. “So that’s why I’m bringing this forward, because I want to stand in solidarity with the Chinese people.” 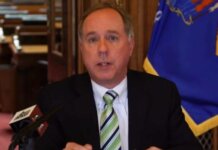