A growing series of COVID-19 outbreaks in American meatpacking plants — including in Wisconsin — is putting a spotlight on dangerous working conditions that employee advocates have been complaining about for decades.

On Wednesday, state officials reported that Brown County has set up two isolation facilities for people who may have been exposed to the novel coronavirus that causes the disease — many of them because of outbreaks in local meat production facilities in and around Green Bay.

Meanwhile, critics including Gov. Tony Evers and several advocacy groups are pushing back on action by President Donald Trump that would pressure the industry to keep operating, potentially at the expense of worker injury or illness, during the pandemic.

And a former meatpacking worker tells the Wisconsin Examiner that industry working conditions are likely to promote the spread of the virus.

Trump’s executive order Tuesday invokes the Defense Production Act and directs the U.S Department of Agriculture to keep meatpacking plants operating to ensure the availability of food. The USDA said it would implement the order. More than 20 plants around the country have closed due to COVID-19 outbreaks, according to published reports.

The impact of the plant closures led Sen. Tammy Baldwin (D-Wis.) and Sen. Josh Hawley (R-Mont.) to write to Federal Trade Commission on Wednesday, demanding an investigation into industry consolidation that has left a handful of companies to dominate the markets for meat production.

“The current COVID-19 crisis has exposed the vulnerabilities of American supply chains and the importance of ensuring that, when disaster strikes, America’s food supplies are not in the hands of a few, mostly foreign-based firms,” the senators’ letter states.

In a statement responding to Trump’s executive order, Debbie Berkowitz, program director for worker safety and health with the National Employment Law Project, said the executive order “will gravely jeopardize the health and safety of the 500,000 workers in the meatpacking industry.”

State officials have not disclosed an exact number of cases of COVID-19-related illnesses among Wisconsin meatpacking workers, but the Milwaukee Journal Sentinel has calculated at least 551 people employed at meat and other food processing plants among the state’s cases. At least one employee, at a plant in Kenosha County, has died, the newspaper reported.

The Occupational Safety and Health Administration (OSHA) is conducting investigations at seven processing plants of meat or other foods, the newspaper said.

Nationally, “more than 3,000 workers in the meat industry have already gotten sick with COVID-19, and 17 workers have died,” stated Berkowitz of the National Employment Law Project, noting that they are disproportionately Latinx, African American or immigrants. “But instead of requiring meatpacking companies to implement safe practices, the President prefers to attempt to shield these corporations from responsibility for putting workers’ lives in danger.”

In a statement released by the organization Opportunity Wisconsin, a coalition promoting economic change and opposing Trump administration economic policies as destructive for working people, Fox Valley Labor Council President Mark Westphal said of the order: “Workers should never be put in a position where they have to choose between their livelihood and their lives.” Westphal, also a member of the Opportunity Wisconsin steering committee, called the order “another example of President Trump rewarding the wealthy and well-connected while Wisconsin workers are left to suffer.”

At a media briefing Wednesday with state Department of Health Services (DHS) officials, Evers acknowledged the importance of a robust food supply as referred to in Trump’s order.

“But we also have to ensure our workers are healthy,” Evers said. “And I don’t think one can happen without the other.”

Evers said the state would be “as cooperative as possible” with the executive order, “but we do need to get those workers tested and their families tested,” referring to the Brown County outbreaks. The Journal Sentinel report says that food processing workers account for more than half of Brown County’s COVID-19 cases.

DHS Secretary-designee Andrea Palm said Wednesday that Brown County has set up two isolation facilities where people infected and their families can go to stay temporarily to avoid infecting others.

Evers also said that OSHA, not DHS, is responsible for enforcing worker safety at plants, but that the state was willing to offer guidance to the federal agency if requested.

Jarrett Brown, who has worked in meat and other food processing plants for more than a decade  including in Wisconsin, Kansas and elsewhere, says industry plants are often crowded and heavily populated, creating conditions that make it easy to spread the virus.

“In the industry, there’s a tendency for companies to do everything they can to cut costs so they can realize a profit,” Brown tells the Wisconsin Examiner. “The main way they do that is by speeding up the production line, so people are cutting more pieces per day.”

Plants may employ as many as 500 to 1,000 or more people, and station them on the meat butchering lines next to each other. “People are working really close to each other — in some cases almost touching each other,” Brown says. “If one person happens to be sick, they’re going to be spreading those germs to others around.”

Break periods are short. “One thing that doesn’t leave a lot of time for is washing hands — that sort of thing,” he says. “I don’t think it’s a conscious decision — they’re just trying to do everything they can to get back [to the work line] in time.”

Industry practices typically penalize workers for taking unplanned sick time, making it all the more likely that a worker who is ill will still show up for work, he observes. Many workers are immigrants and some are undocumented, making them wary of complaining or reporting problems to authorities.

He considers Trump’s executive order to reopen, or keep open, meat production companies to be the wrong approach.

“It’s really irresponsible,” says Brown. “The outbreaks are still going on and getting worse in some places. They need to identify the problem, isolate the problem and control it so going forward it doesn’t come back.”

Plants need to spread workers apart following social distancing rules and make it possible for workers who are ill to stay home, he says. Companies should “test everyone, figure out who’s sick,” and make sure they can be quarantined to avoid exposing others.

But to do that means production would drop sharply, and with it industry revenues and profits.

As it is however, the order is “a terrible thing for the workers — the people who are actually in the plant,” says Brown. “They’re basically ignoring the health and safety of the workers.” 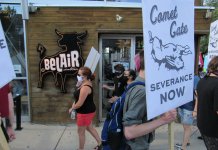 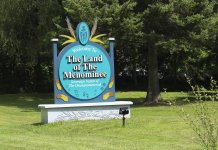