Threats, privilege and confusion from anti-Safer at Home Wisconsin

When Rep. LaKeshia Myers (D-Milwaukee) first issued her criticisms of the anti-lockdown protests, she anticipated some backlash. “I made my opinion known because it was true,” Myers told Wisconsin Examiner. On April 24, she issued a statement calling the protests held outside the Capitol in Wisconsin, “clearly an exercise of white privilege.”

Hundreds of people, some of whom openly carried weapons, turned out toting Trump campaign signs, and decrying what they labeled the “tyranny” of Gov. Tony Evers’ Safer At Home order. Within a few days, as people stewed over Myers’ comments in anti-lockdown pages on social media, the representative received the first volley of threats. 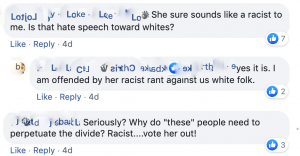 “People saying they were going to find my home and, you know, bring assault rifles there and things like that,” said Myers. Not only did her own home address appear in some online groups, but so did her mother’s address. People began to use social media to facilitate ominous warnings. “’They’re coming,” the representative read. “’They’re going to get you.’ ‘I hope you get what’s coming to you,’ things like that.”

On the one hand, the threats were serious enough to report to local, state and federal law enforcement. Still, Myers continues to speak out about her view of what the protests seemed to demonstrate. Nor is she alone.

Wisconsin’s anti-lockdown protests emerged at the same time as similar protests in Michigan and other neighboring states. Although violators of the states’ emergency orders face fines or jail time, no arrests or citations occurred during these events. For African American residents, elected officials and activists, the disparate treatment of white protesters, compared with black residents of neighborhoods that have long been heavily policed is blatant, yet expected.

“Even though a permit was denied and the Capitol building was closed to the public,” Myers said in her statement, “protesters openly defied the governor’s directive by gathering en masse on the Capitol grounds while waving Confederate flags and carrying military grade assault rifles.” Myers asked why no arrests were made by the Capitol Police when, “in any other situation, willful non-compliance with the law is met with the full force of law enforcement.”

Statewide, the penalties for violating the Safer At Home order may include a $250 fine, and up to 30 days in jail. However, some local municipalities, including Milwaukee County, have upped their fines to $500. Milwaukee Police Chief Alfonso Morales has also stated that people who commit routine crimes, like burglary, will also be charged with violating the order. Enforcing these new emergency orders with police raises the possibility of inequitable enforcement. Particularly in Milwaukee, one of America’s most segregated cities, with high concentrations of COVID-19 in the very same neighborhoods which have historically been over-policed.

With that in mind, it’s hard for some to look back just a few years to how police and suburban communities reacted to the Black Lives Matter movement. Militarized police crackdowns on largely peaceful protests became regular spectacles. Vaun Mayes, a community organizer in Milwaukee, remembers those days all too well. The contrasting result with the anti-lockdown protests demonstrates to Mayes “how this city and state have different rules and punishment according to race and economic status.”

After seeing social media videos of large protests in the wealthy city Brookfield, Wisconsin, Mayes waited for another to pop up. When a smaller one did over the weekend, he went out to learn exactly what’s fueling the protesters despite the reality of COVID-19.

To date, over 8,200 Wisconsinites have tested positive for COVID-19, with 340 deaths statewide. Over 3,200 of those positives and 195 of the deaths, however, are all from Milwaukee County. African Americans represent the majority of the confirmed cases and deaths in the county.

After talking with some of the anti-lockdown protesters, Mayes came to a conclusion that gives extra meaning to those statistics. “Pretty much all of them said they don’t know anyone who has died from COVID,” he told Wisconsin Examiner, “which I think is part of the problem. Because it hasn’t impacted them personally it isn’t real or an issue.” It’s not a new barrier, and reminds Mayes of the difficulties in validating the issues raised by the Black Lives Matter movement to suburban communities just half a decade ago.

During those days, it became clear that white privilege was a difficult concept for many to accept. “It’s not to negate the fact that white people have not struggled ever in their lives,” explains Myers, “it’s that they get the benefit of the doubt, at all times.” Whereas the anti-lockdown protesters felt emboldened to disobey the state law to demand luxuries like haircuts, Myers notes by comparison, “people of color often have to be compliant in order to stay alive.”

She also addressed the Republican talking point that locking down Milwaukee might make sense, while also allowing rural or surrounding communities with low rates of infection to return to ordinary life. That idea is based on a misunderstanding about why Milwaukee has hot spots for the virus.

“Milwaukee, number one, has more cases because there’s more people that live in Milwaukee,” says Myers. Not only is the city Wisconsin’s economic engine, but there are many suburban residents who work in Milwaukee. “So if we block off Milwaukee, that would then also negate other people going in and out of Milwaukee.”

She also points out that, “when you look at the people who have to do a lot of the work that the folks on the other side are complaining that they want to have back, the African American and Hispanics, and other ethnic minorities, are people who primarily do front line service work.” From food packing to restaurant and grocery work, these are the groups most likely to be considered essential workers. They’re also more likely to live in densely populated areas, with more heads under each roof, and to have pre-existing conditions. It’s these things which Mayes feels the anti-lockdown protesters are failing to consider.

Mayes heard a variety of arguments for ending the lockdown during his recent Brookfield visit. One man simply stated “if we die, we die,” and “it was just their time,” while another insisted that children are safe from the virus, unless they have a pre-exisiting condition. Mayes countered that many children in Milwaukee have health issues, including high rates of respiratory conditions like asthma. The same man suggested that children on Milwaukee’s North Side actually aren’t very poor in comparison to the global spectrum of poverty.

“The takeaway,” says Mayes, “was in general most of those people don’t even have the correct data or really any personal knowledge of what or why they are even protesting. They are doing it because they believe they are being patriotic …  but they have no real basis to protest the lockdown aside from simply having the privilege to and because they are being driven to resist the left, aka Democrats.” Many also blended Christianity into their rhetoric, basically nullifying debate.

Behind from the very beginning

Perhaps some of those ideas would shift if some of the anti-lockdown protesters better understood the historical context of what Milwaukee is. Dr. David Pate, associate professor and chair of the Social Work Department at UW-Milwaukee’s Helen Bader School of Social Welfare, traces that history back to when African Americans first arrived in the Cream City.

“Now historically,” Pate told Wisconsin Examiner, “Black Milwaukeeans came to this city much later than those who were white. And when they did come, they settled in the spaces that were seen as not the ideal spaces in Milwaukee. So their historical presence in Milwaukee started out as a deficit.”

Over time, while health conditions in these areas failed to improve, it became increasingly difficult to move to new areas. Today, in 2020, Milwaukee remains one of America’s most segregated cities, and home to the country’s most incarcerated zip code. “People don’t have access to all the same services,” says Pate, “they don’t have access to all the same things they need to be healthy.” It’s an unfortunate tale which is repeated in cities like Detroit, Philadelphia, Chicago and others.

“All those places have the same issue,” says Pate. “They came in at a point where they weren’t given the best place to live in, historically. They did not have the same access to healthcare or education. And so, historical racial discrimination and oppression is now being very much magnified based on the lack of historical access to services that everyone else received, that being primary those who were white.” It’s no coincidence then that all of these places also have seen their minority communities suffer most from COVID-19.

The professor highlights that the anti-lockdown protesters feel as though their right to choose has been taken away. “When the choices to make your own decision has not always been accessible to everybody in this country, particularly those who are black and brown,” adds Pate. “We had to be given that choice.”

In truth, he confesses, “it makes me sad that we don’t want to admit that we are living in a country that is racist. It’s the bottom line.” At times, those feelings may be expressed overtly, or subtly coded in language and ideas. COVID-19 is revealing the legacy of those ideas.

“Based on this current pandemic,” says Pate, “the disparities are clear around health access, health equity and health outcomes. It’s just very clear what has historically not been available to certain groups of people. And how they have had to live their lives in a way that has not been fully actualized.”

Myers feels that if anything, the reaction she received from the anti-lockdown collective proves her point. She feels that, “when you have the ability, or the luxury, of not looking at things through a racialized lens, I think that makes a big difference.” Although she was called a liar and a racist, she feels the reality speaks for itself. “It’s a matter of policy,” says Myers, “that folks are held accountable, no matter who they are. We had a policy in place, and the policy should’ve been followed.”

Threats, privilege and confusion from anti-Safer at Home Wisconsin

by Isiah Holmes, Wisconsin Examiner
May 5, 2020