From wasted food, to the exploitation of farmworkers, the COVID-19 pandemic has made it painfully clear that this country’s food system must be changed. Politicians must pass further stimulus legislation that includes policy to reform our inflexible, consolidated system and to prepare for future crises.

Consider the many problems in the meat industry. Workers ill with COVID-19 caused temporary processing facility closures, putting our nation’s meat supply in jeopardy. President Trump forced meatpacking plants to reopen by executive order, yet further disruptions are likely. Roughly half of those plant workers are immigrants, living at or below the poverty line. Forced to return to work, they are still at risk of getting sick.

Because these plants could not shift production to the retail market when restaurants, schools and hotels closed, product could not move. These supply-chain bottlenecks caused farmer prices to fall, even as processor profits rose.

And cattle ranchers were not the only farmers affected. Dairy farmers were told to dump milk, hog and poultry producers to euthanize their animals and vegetable growers were forced to plow their crops under. Desperately needed food is wasted while grocery costs rise allowing retailers to cash in on supply chain breakdowns.

Before the pandemic hit, close to three million farmworkers who labor on some of the larger operations in this country already struggled. Most lived in poverty, earning between $15,000 and $18,000 a year and around 75% of farmworkers lacked legal status and lived in fear of deportation.

Now, farmworkers face the risk contracting COVID-19. In California’s Monterey county, around 40% of the people who have contracted the virus are those who labor in the fields. USDA’s response? Instead of improving working conditions for farmworkers, the USDA  wants to pay them less.

USDA has allocated $16 billion in direct payments to farmers, as well as creating the “farm to families box” program – where suppliers, with larger operations having a seeming advantage, sell their produce to the government for distribution at food banks. Both initiatives are band-aids, with direct payments mirroring past trade-deal mitigation payments, wherein larger operations and multinational agribusiness firms such as JBS are at the front of the line. All of this is happening as farm bankruptcies hit an eight-year high.

To really address the failures of the food system — and to position ourselves to adequately face the next crisis — we must reform our food system, ensure fair farm prices, empower agricultural workers and invest in rural infrastructure.

Farmworkers, in addition to citizenship, must be allowed to organize without fear of reprisal from their employer. Currently, only California guarantees this right because the National Labor Relations Act excludes rural workers from the right to unionize. The Farm Workforce Modernization Act includes citizenship for farmworkers. Still, efforts should go further by allowing workers the right to organize.

Farmworkers should also have the chance to become farmers. Since 2008, through the Farm Service Agency’s Beginning Farmer and Rancher Development Program (BFRDP) over $162 billion has been provided to former farmworkers, including women, veterans and Native Americans, to promote small-scale agriculture. Doubling or tripling the resources dedicated to this program could help create a more localized food system and put more farmers on the land.

All farmers need fair markets and fair prices. The government must, as it has in the past, establish reserves for grains, as well as other products.  Counter-cyclical government loans — a part of previous Farm Bills — would allow farmers to sell their produce either on the market, or into the reserves, with their decision based on a floor price that farmers, processors, and retailers would negotiate. Reserves would improve prices for farmers, prevent food shortages and stabilize consumer prices.

Smaller local processing facilities — for beef, dairy as well as fruits and vegetables — would strengthen markets and make the supply chain more flexible. This should include more brick and mortar facilities, as well as mobile facilities that can travel from farm to farm, giving farmers multiple options for sales and consumers more options on how they buy.

Rural areas are in desperate need of improved communications and transportation infrastructure. The Post Office provides rural residents affordable access to the rest of the world and its viability must be ensured. Similarly, broadband internet access must be made available to everyone. And if farmers are to move their product, significant resources need to be spent on improving roads, dams, bridges and railroads.

The effects of the COVID-19 pandemic have shown that large processors cannot meet the challenges of a crisis. A less consolidated food system that is more flexible, and supportive of farmers and workers will be better able to meet future challenges. Upcoming stimulus plans must address these problems in our food system now and for the long term. If they do, we might be ready for the next challenge. 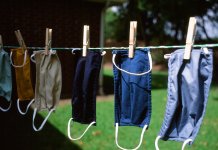 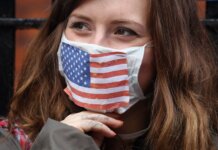 CDC: You can ditch the mask in most places, indoors and out, if fully vaccinated

by Anthony Pahnke, Wisconsin Examiner
May 26, 2020