At the time, I laughed.

Nearly 13 years later, amid the protests convulsing American cities over police brutality and racism, it doesn’t seem like a joke.

I was writing profiles of the candidates vying to replace a longtime south Louisiana sheriff and Godfrey “Doc” Buquet, a retired chief of detectives who looked more than a little like a scary Santa Claus, was running an underfinanced longshot campaign for his old boss’ job.

Part of his message that set him apart in a crowded field of candidates pushing for crackdowns on drug crime was a call for kinder, gentler hearts-and-minds community policing, though he didn’t use that terminology.

“We’re not here to make enemies of the citizens of our parish,” he told me. “We need to have some understanding and compassion.”

But it’s something else he said, left on the cutting room floor for that article, that’s stuck with me all these years.

“I was in a gang,” Doc said he told young offenders as something like an ice-breaker during volunteer work in his spare time. “It’s called the police.”

During my time at newspapers, I covered police departments in four states, from agencies like the Cranford Township Police in suburban New Jersey to the 900-officer Pittsburgh Police Bureau, which saw a chief sent to federal prison not long after I arrived in the city. I have known great people who worked at all of them.

I’m no policing expert. But, from ridealongs with narcotics agents and sitting down with detectives to talk cold cases to years of covering trials, car crashes, homicides and other crime, I’ve spent a lot of time around cops. I’ve seen and reported on the good, the bad and the ugly — everything from excessive force lawsuits and egregious cases of police misconduct to cops shooting people, cops being shot, controversial deaths of suspects in custody and heartwarming acts of kindness.

There were common threads, though, that too often emerged, particularly in Pittsburgh, where even the worst cops were shielded by collective bargaining agreements and an arbitration system that made it tough to kick them off the force.

Closing ranks around people who shouldn’t be wearing a badge. Defending the indefensible. Embellishing or manufacturing threats to justify beatings, shootings, arrests or harassment. And even when they were caught red-handed, there were often few, if any, repercussions. Of course, the consequences of this version of a Mafia omertà fell hardest on the most heavily policed and brutalized black communities.

Bad apples? A poison tree? That’s really a distinction without a difference at this point.

Some police precincts and headquarters across the country were under siege (even torched) during the protests and riots that broke out following George Floyd’s death under the knee of a Minneapolis cop. Demonstrators openly attacked police in the streets. Calls to defund or even abolish police departments are gaining steam, including in mainstream publications. Over the weekend, nine members of Minneapolis’ City Council vowed to dismantle the city’s police department.

Already, an uneasy national debate is unfolding about what “defunding” really means, with Democrats backing away from the most extreme interpretations that have been on display on protesters’ signs across the country and Republicans sensing a political opportunity even as they continue to cover for a president seemingly intent on making our national unrest worse at every turn.

Fixing the racial inequities in our criminal justice system demands a national response, given the patchwork nature of police standards and regulation in the United States, though that seems unlikely at the moment given our deeply polarized national government. We should all be able to agree that having 1,000 people killed every year by the police, a disproportionate number of them black people, and orders of magnitude more than other developed countries, is unacceptable, despite some apparent progress in the number of unarmed people slain by officers.

It’s just common sense that we need to reduce the number of interactions armed agents of the state have with people grappling with mental illness, drug addiction and homelessness by removing those responsibilities from their portfolio. That African-American communities shouldn’t bear the brunt of efforts to juke stats or raise revenue. That the power to use force, deadly and otherwise, should be reserved for only the most extreme situations. Here’s a good primer.

Many police departments around the country have been giving us near daily examples of why they need to be reined in, like when the Richmond Police without warning deployed tear gas on peaceful protesters, falsely claiming it was about officer safety and refusing to answer questions about discipline despite profuse apologies from the mayor and police.

Shoving elderly people to the ground, pepper spraying and arresting people whose only offense is mouthing off and beating and shooting journalists and others in the face with rubber bullets isn’t the way to convince the citizenry that business-as-usual is fine.

Community legitimacy is the most important currency for a police department. Too many of them have casually burned through it without fear of consequences. And now we’re seeing all over the country what happens when it’s spent.

Understanding and compassion was what George Floyd needed as he was gasping for breath under Derek Chauvin’s knee.

Understanding and compassion is what we all need as we set to the long, difficult and fraught task of changing policing in America.

Test for democracy in the United States Senate this week 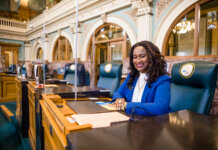 Settled into new homes, refugees in US say they are working for a better life for all