After the death of George Floyd at the hands of Minneapolis police, calls for defunding the police have grown across the nation. School Resource Officers (SROs) are being examined across the country as well. Is it time to get police out of our schools?

School Resource Officers (SROs) have existed in schools since the 1950s, but the program really took off in the aftermath of the first mass school shootings. The primary role of SROs is often seen as the cop with a gun who takes out a school shooter. The secondary role is to act as a mentor and work with students to help them stay on the straight and narrow.

When I attended a workshop of the Wisconsin Association of School Boards a couple of years back, one session was on the role of SROs. A local SRO officer brought with him two officers from the SWAT team who proudly displayed the SWAT team badges on their uniforms.  There was no question what they thought was their primary role.

On December 2, 2019, a police officer shot a student at Waukesha South High School. The officer knew the student had a gun but he didn’t know it was a pellet gun. The following day, another police officer shot a student at Oshkosh West High School. This incident involved an altercation with a knife, and the officer was cut. Multiple shootings involving students and police officers in Wisconsin schools raised questions about whether the officers could have handled the situation differently, so that no one got shot.

After the rash of school-shooting news in December, the Green Bay school board called for an evaluation of when and how police would use lethal force in their school buildings.

On January 20, Police Chief Andrew Smith came before the Green Bay school board and gave his perspective. “Our use of force guidelines that we have are the same whether the officer is in a school and in a school situation or whether they are on the street or they are in someone else’s house,” the chief was quoted as saying in The Press Times. He went on to say that the SROs were also there to build relationships with students and work with kids.

Kristina Shelton is vice president of the Green Bay school board and wanted more from the meeting.

“If the role of SROs is to create and forge relationships with students, are they [the police] the best qualified to do that?” Shelton asks. “I would like to see counselors and social workers to be the front lines of that.”

She believes some board members may have been reluctant to vote to defund SROs because they were afraid of a backlash; some citizens might say, “You just want a free-for-all; you don’t support the police.”

The death of George Floyd and the protests that followed have changed the conversation.

In Madison, school board president Gloria Reyes is a former Madison police officer and was able to shepherd support for the SRO program with a 4-3 vote of the board. She has now changed her position and is in favor of ending the program.

Ali Muldrow is vice president of the Madison school board and one of the three members who voted against the SRO contract.

When we say we need the SRO program to build a relationship between students and police, reflects Muldrow, “what we are saying is that we can’t trust the everyday cop to come into our school system and behave appropriately. What we hope is, if our school systems funnel money into the police department, that the nature of the relationship will be more beneficial to both organizations.” But Muldrow doesn’t buy this concept as justification to keep the program.

“For whatever reason, black students are hyper-monitored, hyper-profiled by police, and hyper-accused in activities within our schools. So, we are not seeing the even distribution of law enforcement. Students who may be in possession of a controlled substance, what we are seeing is the targeting of black students in school, in the same types of behavior that all students are participating in.”

She states that the current SRO contract with the police department allows the district to terminate the contract if it can be shown that there is a disproportionate number of arrests of minority students through the SRO program. But the closing of schools because of COVID-19 has made it impossible to collect meaningful data. Muldrow has seen enough to want to terminate the contract.

Milwaukee school board president Larry Miller has called for a special meeting of the board on Thursday, June 18. At that meeting, the board is expected to hear public testimony. On the agenda is a resolution by board members Phillips and Taylor to immediately terminate all contracts with the Milwaukee Police Department.

Milwaukee Public Schools (MPS) began its SRO program after a January 2007 incident at Bradley Tech High School. A fight took place in the school, during which students called family members and friends to help them in the fight using their cell phones. The district quickly banned the use of cell phones and instituted a pilot program for SROs at two high schools: Bradley and Custer.

In February 2008, the Milwaukee Common Council approved a permanent program to have officers assigned as SROs at six schools for the 2008-2009 school year jointly paid for by the city and school district.

Wendel Harris is a former Milwaukee school board member and was first vice president of the Milwaukee chapter of the NAACP when the SRO program was first instituted in MPS. At first, Harris supported the program. He had a friend in a suburban district who was in charge of that school system’s SRO program, and Harris believed a lot of good could come from the interaction between students and police.

The Milwaukee police department said it would be very careful in whom it chose to serve in schools, remembers Harris. “The first group who were chosen appeared to be well suited to work with children.” But that didn’t last long. Harris volunteered in the school quite often, and as new officers came into the SRO program, they appeared more interested in patrolling the halls and arresting students.

Harris blames himself and the community for not pushing harder to make the program work and holding the police accountable to maintain a quality SRO program. “It just didn’t work the way we thought it would.”

In August 2016, Milwaukee Superintendent Gregory Thornton presented a new SRO contract with the police department to the school board calling it a contract “to continue the School Resource Model.”

I was serving on the school board at the time, and I noticed that the contract was not a continuation, but a totally new model. “Officers will not be assigned solely to one school” it stated. Instead, they would go to schools throughout the district when needs would pop up. The SRO program would become a rapid response team and work less with individual schools and students.

When questioned, Thornton admitted that the program wasn’t working. During the discussions that night and later, several people who worked for the school district contended that some officers really weren’t interested in working as mentors with students; they didn’t see it as real police work. The police claimed that some principals wanted officers to enforce school rules that were not strictly violations of the law. At most, officers could charge a student with disorderly conduct or failure to obey an officer. Police officers made it clear that they were not under the authority of the principal even though some principals felt they were in charge of everyone in their building.

Many of these problems had been outlined as early as 2009 in a report by Students Speak Out organization from meetings with MPS administrator Kristi Cole and police captain Eduardo Negron. “Police weren’t getting to know the students. They were becoming disciplinarians,” wrote the author, Kim Farris-Berg.

Police were writing out tickets to students for being late for class. One assistant principal attended a meeting at Vincent High School. Farris-Berg writes that the assistant principal said “the police are there to intimidate them into submission. Police’s threatening presence is the only effective means of controlling students.”

Both Cole and Negron stated that this was not the intent of the program. “Scaring students hinders accomplishment of program goals.”

The board approved a resolution calling for an independent evaluation of the SRO program. That evaluation did not come before the board until May 2018. It was conducted by John Rosiak of Prevention Partnership, an organization often called upon to evaluate SRO programs.

Rosiak found a number of deficiencies in Milwaukee’s program.

The board was presented with a new contract on September 27 which addressed only superficially some of the deficiencies but kept in place the response teams rather than stationing officers in schools. The board approved the contract, in part, because the vote came just after the Parkland, Fla. school shootings, and the main concern at this time was safety and security, not mentoring and communications.

Angela Harris is an MPS teacher and chair of the Black Educators Caucus in Milwaukee. She points out that Milwaukee’s SRO program meets no known definition of SROs. “We have six officers which we could describe as a rapid response team.”

Her organization advocates for more anti-biased, anti-racist training of school staff. “Not just a one and done” program. “Fund counselors, not cops,” she says.

Wendell Harris notes that the NAACP nationally is against having SROs in schools. He has reached out to Racine and Kenosha NAACP leadership, and they oppose SROs in their schools. The Beloit NAACP, in particular, is “adamant” about getting the SROs out.

The resolution by Milwaukee school board directors Paula Phillips and Sequanna Taylor effectively ends Milwaukee’s SRO program and cuts other ties with the police department.

The resolution redirects funds from these police programs to restorative practices, violence prevention, and other community involvement projects. But the resolution goes further, not just ending the relationship with the “police,” but also cutting back on internal “policing” by cutting funding for metal detectors, facial recognition software, and social monitoring software. Whether the majority of board members will go along with these additional measures is unknown.

It appears Milwaukee will keep in place its safety assistant program. These assistants carry no weapons, no handcuffs and have no arrest powers. They are expected to interact with students on a daily basis in a positive way.

Large, urban school districts in Minneapolis and Portland are set to end their SRO programs. In Wisconsin, both Milwaukee and Madison are likely to do the same. Smaller communities with a large minority population such as Green Bay, Beloit, Racine, Kenosha and others may follow. Smaller communities, with a smaller minority population, have said little in public about what they will do.

The public conversation about removing SROs from schools might change again with the next mass school shooting. But mass shootings in urban schools are extremely rare. Such shootings almost always take place in suburban, small town and rural districts. For urban schools, police are not seen protecting students from intruders; instead, increasingly they are seen as armed intruders pointing their guns at the students themselves.

Correction: An earlier version of this article stated that Kristina Shelton now supports removing SROs from schools. This was incorrect. The Examiner regrets the error. 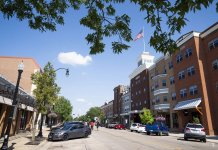 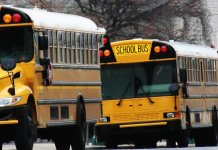