Her father, a retired professor, studied the FBI’s surveillance of activists, and Theoharis describes her mother as, “a full time activist for much of her life.” Although her mother passed away recently, the many lessons she taught live on in her daughter’s work, including the Poor People Campaign’s upcoming digital justice assembly Saturday, June 20.

“She was very tough and deeply committed to justice,” Theoharis recalls of her mother. Not only had her family survived the genocide, but her mother also survived a childhood brush with polio. “My mom was a real fighter.”

Her parents’ social justice work was rooted in their faith as Theoharis grew up in Milwaukee. “I was a Sunday school teacher at my church from the age of 13,” she explains. “And a deacon in my church from the age of 16. So a lot of my activism was also through our church, and also through a lens of a way to be a good Christian.” By helping make a difference in the world, a young Theoharis felt she would accomplish that purpose.

Milwaukee and Wisconsin as a whole were the young activist’s stomping grounds. “I was going to protests from when I was a baby,” she says.. “I was organizing hunger and homelessness awareness weeks as a young teenager. I was being a counselor for Beyond Racism day camps, again as a young teenager.” When she was  a young child, Theoharis’ parents brought her to anti-apartheid rallies in the 80’s. “I was always involved in peace protests and other kinds of education and demonstrations around everything. From workers’ rights to anti-racism, to peace across the world.”

Her calling to faith has also helped inform these efforts by Theorharis and her family. And even though this hasn’t changed in her own life, Theoharis has noticed a change in the church’s role in activism over the years. “I think there has been a movement of faith leaders, across faith traditions, that see justice, and peace, and kindness being core to what it is to live out your faith.”

Since the days of Dr. Martin Luther King Jr, however, that public view of the church has waned gradually. “I think that the quote-unquote ‘moral issues of the day’ have been defined over the past 50 years as private schools, and being against abortion, and warring about same-sex marriage,” she says. Nevertheless, Theoharis feels the legacy of activism and faith-based work for social justice movements still matters.

For the reverend, issues like health care and living wages for all, the elimination of poverty and racism and an end to wars are moral issues. She doesn’t feel this legacy, “has been gone,” Theoharis explains, “I think it’s just been pretty silent for some years.” Church has always been her “home base for activism.”

After going off to college, Theoharis linked up with groups working on grassroots poverty movements. Graduation brought with it the call for Theoharis to go to seminary in her early 20s.

Her aim was “to figure out what the church’s relationship could be, and should be, and must be to a growing movement of poor people to end poverty,” she says. Many of her fellow activists were either homeless or lived in poverty. Theoharis herself also experienced homelessness around this period of her life.

Twelve years later, Theoharis was ordained as a minister in the Presbyterian church. All the while, she was raising children, working various jobs, working on her PhD, and keeping her activism alive. It was an arduous struggle, but it felt necessary. “To be ordained was a call to move the church on issues of poverty,” she told Wisconsin Examiner. “And trying to get mainline protestant churches to be a little bit more out there, when it came to issues of social justice, and poverty, and racism.” Theoharis’ experience informed her of the many faces of religion, from organized and institutionalized religion to “the religion of the streets. And of movements.”

Throughout her own trials, Theoharis says she was fortunate to never feel alone. Friends offered her places to sleep, and allies in the movement she was involved in always took care of one another. Moving from Milwaukee to Philadelphia, Theoharis found herself, a girl from Wisconsin, feeling her way through a new place. “To me, some of those experiences of the power of people coming together across all of these differences, and the fact that I had a role to play, and that I could be there in the numbers as people organized for a better society …that’s the memory, that’s the feeling I get. The power of poor people organizing and coming together. And the power of people from all walks of life coming together and building a movement.”

Ten years of grassroots poverty organizing helped Theoharis and her allies build the blueprint for the Kairos Center, which she now directors. Their goal was to reincarnate the Poor People’s Campaign on it’s own anniversary, and to explore ways faith and human-rights organizations could support these movements.

It was at this point that Theoharis’ journey crossed roads with the Rev. Dr. William Barber, who was  involved in organizing the Moral Mondays protests in North Carolina at the time. Theoharis invited Barber to be a keynote speaker for the Kairos Center’s launch, and he accepted.

With a Poor People’s Assembly planned and a Moral March on Washington on the distant horizon, Theoharis is holding onto her roots, including the place where the seeds of her decades of grassroots work are  planted, her family, and particularly her mother’s memory.

“She was stubborn, and she was determined, and she couldn’t go anywhere without telling anybody … that they also needed to dedicate their lives to doing the work of justice. And she was someone who, I think on some level, was someone who was almost ahead of her time in terms of many of the issues that we talk about today,” Theoharis says.

“She always saw the connection between justice issues in Milwaukee, and justice issues across the world whether it was in Russia, or Palestine, or El Salvador, or South Africa.”

Moving forward into the future, the reverend finds herself reflecting on where her journey has led her. “From Milwaukee, to where we are now.” 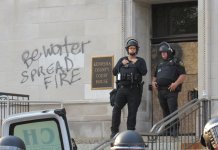 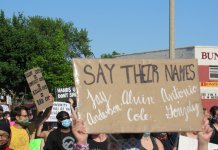 Was the Alvin Cole shooting decision delayed by Kenosha unrest?

What she's learned from "the religion of the streets"