The role of the police in our society has been under a microscope since the killing of George Floyd by the Minneapolis Police Department in May. Local Policing is an ongoing series analyzing the culture, tactics and actions of departments big and small across Wisconsin. If you have a story to share about your local police, reach out to reporters Isiah Holmes and Henry Redman at [email protected] and [email protected]

This, says Randy Shrewsberry, the executive director at The Institute for Criminal Justice Training Reform, is how we train police officers.

But instead of spiders, the threat is the risk of injury and death officers face in the field.

“Once you get to the academy, everything that you do has an officer safety component tied to it,” Shrewsberry says. “You walk in, you’re inundated with videos and training material surrounding officers being killed or severely beaten on the job”

This ends up overinflating the officer’s perceptions of danger, he says.

“One of the things we talk about, policing has never really been safer, there’s about 60 police officers on average killed annually by homicide, that’s out of a million cops, 69 million interactions with the public,” Shrewsberry says. “When we look at how police officers are dying, equally they’re dying by car crashes but they only get about a week’s worth of training in safe driving. They’re nearly three times as likely to kill themselves, for which they get less than a day’s worth of training.”

“What we’ve done is created an environment for which there is an overinflated sense of danger,” he adds. “Through militarization we’ve said every member of the public is a potential enemy combatant. You’re constantly on guard.”

This decision to focus on officer safety — from when they apply to when they graduate, not to mention TV and movies — shows how far communication and rhetoric can go toward shaping the perceptions and ultimately the actions of police officers on the street.

Now, changing rhetoric isn’t anywhere near a magic bullet solution to policing. Departments across Wisconsin tout their progressive values yet activists in Madison will be the first to say that means nothing when Black teenagers are still being beaten or killed and the officers are allowed to keep their jobs.

But these rhetorical choices are the shaky foundation of everything that comes after the training.

“The messaging is essential, the image is essential,” former Madison Police Chief David Couper says. “What’s the message when you put cops in schools, cops in body armor with extra ammunition, what are you saying?”

There are small, subtle rhetorical choices, and there are more obvious ones.

When a police department’s SWAT Team is used, it’s called a deployment. What does it mean that the department’s most heavily armed officers are using the language of the military?

Uniformed officers report to sergeants and lieutenants, who then report to captains. The way the command structure is designed — and the words that departments have chosen — echo the military. So, Shrewsberry asks, why are we surprised by the outcome?

“The Los Angeles Police Department, they use the language of platoons,” Shrewsberry says. “Again, it’s all this really deep militarized language. It’s how we’re dressing them and equipping them. We’re putting them in uniforms, especially today, that are nearly indistinguishable from the military. My daily quote, if we train them like soldiers, dress them like soldiers, give them equipment like soldiers, then we can’t be surprised when they act like soldiers.”

The deeply ingrained militarized language is one thing, but other ways the police communicate have a more direct effect on their interactions with others, says Ion Meyn, a law professor at UW-Madison. Meyn says this rhetoric can make it easier to use force.

“The rhetoric so far is that there’s two sets of people that officers protect — this is the conclusion I’ve come to — officers, which is understandable, and the public,” Meyn says. “The public being not the subject. If you look at training after training … there’s three players: the officer, the public and the bad guy.”

“Bad guy is not subtle at all,” he continues. “That designation makes it easier for the department to justify use of force, by deeming the subject a bad guy.”

Searching for the ‘bad guy’

Frei’s goal was to display the challenges officers face when entering a complicated situation with high emotions and limited information and he said in an email that one of the “bad guy” uses was added later by an editor. The piece described an event that took place July 5 on the north side of Madison. Frei was sitting in a Culver’s parking lot when a call came in for an incident happening at a nearby apartment complex involving people with weapons.

Frei arrived to a large group of people who, he wrote, were screaming at him to do something. Frei notes it was hard to determine what had occurred because the people were emotional — understandable considering they said they’d just had a firearm pointed at them.

He outlines his options. First, he’s there alone in a group of what he says is at least 15 people and could wait for backup.

“No officer wants to stay in the car or just watch from a distance,” he writes. “What if someone is hurt or being hurt? And what if the ‘bad guys’ get away. This is very serious and dangerous behavior. It leads people to feel victimized and potentially scared for their lives. It leads to retaliation and a view that, ‘If the police won’t deal with it, we will.’”

He says he could also pull his gun and order everyone on the ground until more officers arrive, though that also means the people who called him there will now have a second gun pointed at them. Or, he can “observe,” which he says makes the people in the crowd feel like action isn’t being taken.

“Those who were not the aggressors would feel like ‘I didn’t do anything wrong, I called you and you pointed a gun at me,’ and I get that,” Frei writes.

“Some would be right,” he continues. “They were just with the suspect or suspects. Some would be the actual ‘bad guys,’ but shockingly the ‘bad guys’ almost never take responsibility for what they just did.”

Frei’s conclusion was that none of his available options were that great and no one walked away happy. A Madison Police Department incident report says an arrest was eventually made and Meyn, the law professor, says Frei was actually short-selling his success.

“This officer actually achieved more than he says,” Meyn said in an email. “His presence de-escalated the situation; people dispersed. He adhered to many of the best practices of policing; refraining from rushing in, waiting for back-up, and in the meantime, asked bystanders and participants for information to better assess the situation.”

In addition to Frei’s use of the term “bad guys,” he also suggested they might have been in the emotional crowd he was dealing with. He says he does believe the terms he uses in print and on the job have various implications, sometimes word choices are made for brevity’s sake when publishing in a newspaper with a finite amount of column inches to fill.

Frei says when he’s doing his job, he’s aware of his implicit biases and tries to treat people “fairly, with empathy, dignity, and understanding.”

“Not only do I guard against terms shaping my view but I also do not let past experiences and actions impact my decision making,” he tells the Wisconsin Examiner. “It’s actually relatively common to have interactions with an individual somewhat often … and we try very hard to let each interaction stand alone.”

Rhetoric can cause risk

If the cops show up looking for the bad guy, they’ll probably find him — and the person singled out is more likely to be a person of color, says Meyn.

In real life, the world is much more nuanced than good guys and bad guys. That sentiment is echoed by officers, even though the language often loses it.

“Is everything a variant shade of gray? Yes,” Madison Police Training Captain Jennifer Krueger Favour says. “Are there truly bad people out in the world, are some people truly bad? Yes.”

What this comes down to is how the language ultimately shapes how they use force. When everything is added together, the heavy concentration on officer safety, the militarized language and the search for the “bad guys,” does it put too much risk on the public?

Any interaction between a cop and a member of the public has some level of risk. The amount of risk changes based on a variety of variables, but it’s there. In that interaction the risk exists on a continuum. On one side, all the risk is put on the public, on the other it’s on the cop.

The cops, obviously, want to minimize their risk. They’ve got loved ones and families and want to reach the end of their shift safely.

“I can tell you that while yes, officer safety is extremely important, our number one goal is to obviously live to the next day,” Krueger Favour says. “It plays a part in all that we do, it’s not all we teach people. You have to understand, officer safety means a whole lot more than quote, unquote force. Talking to somebody, our tone of voice, how we present ourselves, it’s everything. Yes, it is important, however, it’s not the only thing out there.”

Frank talk on use of force

What needs to happen, Meyn says, is a frank discussion about where society wants to place that risk. How does changing a use-of-force policy move the risk on the police-to-public spectrum described above?

He uses the example of people who are killed by police because they are perceived to be reaching for their waistband. In a certain number of those incidents, there isn’t a weapon. So, if policy is changed so the officer has to confirm the existence of the weapon before firing, that reduces the risk to the public even though it may raise the risk to the officers.

“I think there needs to be really open discussions about how risk is distributed,” he adds. “Any kind of way we approach an encounter is going to distribute risk in different ways. It’s a public servant who is putting himself and herself at risk for a public good, that’s something that deserves recognition and respect. I think communities have to have a much more open discussion about the consequences of current use of force practices.”

These are tough conversations, but they need to be had, Couper says. Even though they’ve been happening for decades.

“We end up with things like not doing chokeholds, not shooting at fleeing cars, not doing no-knock warrants, we started talking about these things 40 freaking years ago,” he says. “We need to reimagine policing. Citizens need to say this is the kind of police we want. Maybe people will say we want warrior cops, well OK, you’re going to get the kind of police department you deserve.” 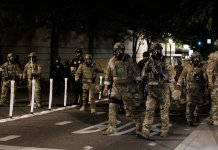