Menominee Tribal Chair Joan Delabreau, a passionate advocate for missing Indigenous people, is rallying the public, law enforcement and the media to keep a spotlight on finding 22-year-old tribal member Katelyn Kelley, who disappeared more than a month ago after being seen leaving the reservation and possibly getting a ride to her home in Shawano, about eight miles away.

Delabreau hosted a press conference last week outside tribal offices in Keshena, asking for the public’s help in gathering any information tied to Kelley’s whereabouts.

“The tribal legislators know their role, that they need to help you with any means that they can keep this in the forefront of people’s minds,” Delabreau told media at a news conference last Wednesday, explaining that the tribe is offering $5,000 rewards tied to finding not only Kelley, but another tribal member, Robert Lyons, who was reported missing in 2017.

“Everybody wants a solution to the issues that are out there and resolution to the people who are missing, not just ours but throughout the nation,” she added. 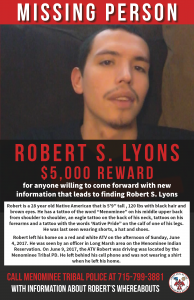 The total number of Indigenous people who are missing is something that even groups that track such cases say cannot be accurately counted, due to poor data collection across jurisdictions and misclassifications. In 2016, according to the National Crime Information Center, 5,712 missing Indigenous girls and women were reported, but the federal Department of Justice’s database listed just 116 of them. 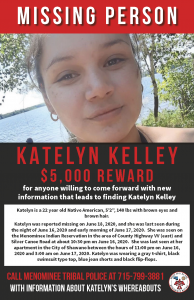 Delabreau emphasizes that the Menominee also have two older unresolved cases; Rae Elaine Tourtillott, who was found murdered in 1987, and Lisa Ninham, who disappeared in 1980. Neither case has been solved. Delabreau says that it surprises her that there are so many unresolved cases given how strongly her community works together when a member is reported missing.

“The one that we know for sure has been confirmed as being murdered, there’s support for that family,” she tells the Examiner. “Even after 30 years, it is still extremely strong.”

Menominee Tribal Interim Chief of Police Richard Nacotee echoes that sentiment and wants the families assured that all four cases are still being investigated. “We continue to ask the community to provide that information regardless of how small or minute you may believe that the information is … that helps our officers and detectives corroborate other information that they have received.”

A mother’s point of view

For the chairwoman, who labels herself “a mother who worries about whether she is worrying enough,” the issue is personal.

“My own son was missing and was found. He was missing for seven weeks in 1996, found in early 1997. So that’s something that’s near and dear to me because I know what parents are going through. And I know what they’re worried about.” She’s felt the worry — and the pain of getting news she did not want. Her son was found dead.

In the case of Kelley, Delabreau says that when her mother had not heard from her for two days she became “very concerned because it was not within her pattern to be gone for that long.” Katelyn Kelley has an infant son.

“She needs to be home by her family and her baby, this is very unlike her to be gone this long, even like a couple days, I am just worried, I want her home, I just want to know where she is,” Katelyn Kelley’s mother, Michelle Kelley, said in an interview with WBAY Action 2 News on June 23.

She was seen on the Menominee Indian Reservation near County Highway VV and Silver Canoe Road at approximately 10:30 pm on June 16 and later than night at her apartment in Shawano.

Multiple jurisdictions of law enforcement, including a team of search dogs, have joined together to search roads, forests and bodies of water. Her description from police is a Native American, around 5’2” tall, weighing 140 lbs, with brown eyes and brown hair, who was last seen wearing a grey t-shirt, black swimsuit-type top, blue jean shorts and black flip-flops.

Kelley’s disappearance involves an added layer of pain for tribal members because the place where she was last seen on the reservation is not far from the place where Rae Tourtillott’s body was found. “From the perspective up here, I think a lot of people were thinking, ‘Oh my God, not again,’” says Delabreau. “So I think I think people are drawing that relationship. But at the same time, they are hoping and wishing that we would have better results. But here we are over 30 days later, still doing the search.”

All 11 Wisconsin tribes have missing persons cases, according to Delabreau. There is growing recent attention — nationwide and in our state — to the crisis of missing and murdered Indigenous women and girls.

Attorney General Josh Kaul announced earlier this month that he is forming a Missing and Murdered Indigenous Women Task Force to look into the crisis around the abduction, homicide and trafficking of indigenous women in Wisconsin. He hopes it will have a first meeting near the end of summer so it can come out with a report around the same time next year.

A bipartisan bill to form a similar task force was unveiled last October but was killed by legislative inaction this spring. Kaul felt that waiting to see if the Legislature would pass it, or not, next year was not soon enough.

When the broadly bipartisan bill received a public hearing on March 3, Menominee leaders and police traveled to Madison. The tribe’s delegation also provided information tied to sex trafficking. “Nobody’s immune from that happening within your community,” says Delabreau. “Not nowadays.”

Bill authors Rep. Amanda Stuck (D-Appleton) and Sen. Janet Bewley (D-Mason) agree that the starting place is the formation of an accurate picture of the situation in Wisconsin.

“We just don’t naturally get the data that we need to understand who is missing, what’s happened, how many women have been taken, abducted — or unfortunately — beaten and murdered,” says Bewley, the Senate minority leader. “Why is it that Native women go missing? We would have started that process of an investigation so that we can at least understand exactly what is happening and then that would lead to the things that could prevent this from happening.”

Kaul is following the same line of thought in creating his task force: “First, to make sure that people are aware of this issue. Second, so we can get better information about this issue. So we can gather data on the scale of this problem. And so we can start identifying the root causes that contribute to this problem.”

According to the Wisconsin Department of Justice, violence against Native women and girls is an under-reported problem throughout the United States, and cases are often misclassified or there is confusion about jurisdiction.

Kaul wants to determine accurate data protocols to improve data collection and tracking information. On the Menominee reservation, where the state does not have legal authority, jurisdiction includes the Federal Bureau of Investigation, as well as tribal and Shawano police.

National coordination is essential. Last November, President Donald Trump formed a federal Task Force on Missing and Murdered American Indians and Alaskan Natives, which Delabreau wishes had come far sooner, but she praises the president for his action on the issue all the same.

With many missing persons investigations, including Indigenous persons, there is often a complex web of contributing factors. A top issue is human trafficking. Another is drug addiction, particularly to opioids and meth, which are used by many human traffickers to control the people they abduct.

“One of the things we’re looking to do is develop more expertise when it comes to the investigation and prosecution of human trafficking cases,” says Kaul. “It’s an issue that has gone under-addressed for far too long. And it’s an area where we still don’t have good data and we have to do more to figure out exactly what the trafficking networks look like and how we can dismantle them.”

“One of the things that I’m hopeful that we’ll see through the task force is what role  human trafficking plays in missing and murdered Indigenous women,” says Kaul. “I’m suspecting it plays a pretty significant one and I think getting more information from people will help us get a better sense of that.”

Anyone with any information or tips tied to the disappearance of Katelyn Kelley, or any of the other missing tribal members, is asked to call the Menominee Tribal Police at 715-799-3881.

How land acknowledgments for indigenous people sanitize… by Elisa Sobo October 12, 2021
Enviros and Menominee tribe fight to keep Back Forty Mine at… by Laina Stebbins July 20, 2021
How a Wisconsin tribe helped launch a Trump-approved ‘Make… by Ruth Conniff December 22, 2021