The Menominee Nation covers most of Menominee County, which is the only county in Wisconsin without an independent newspaper. (Henry Redman | Wisconsin Examiner)

The answer is yes, of course, but as COVID-19 continues to spread through all of Wisconsin’s 72 counties, people are increasingly being infected in communities that have seen local journalism institutions shut down or hollowed out — places known as news deserts.

Since 2004, Wisconsin has lost 77 newspapers, according to a University of North Carolina database. That’s a loss of 28% of the state’s daily and weekly print news. Circulation has taken an even bigger hit — dropping 39% since 2004. 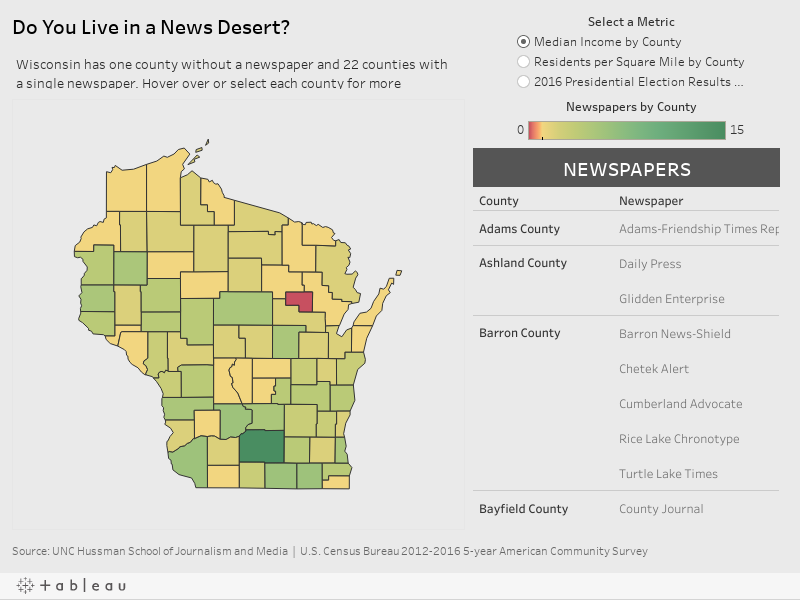 Wisconsin newspapers have also been bought up by large corporations. Nearly 40% of the state’s 197 remaining papers are owned by five companies.

According to the UNC database, Lee Enterprises owns 20 newspapers, including the Wisconsin State Journal. Adams Publishing Group owns 22 newspapers, from the Beloit Daily News in Rock County to the Daily Press in Ashland County with major dailies like the Janesville Gazette and Eau Claire Leader-Telegram in between.

Gannett — the largest newspaper owner in the country — owns 16 newspapers, including the Milwaukee Journal-Sentinel.

Not yet covered by the UNC data is the effect of the economic crisis caused by COVID-19. With advertising revenue drying up, newspapers have been pushed out of business or been left hanging by a thread across the country. The La Crosse Tribune, a major daily paper in western Wisconsin owned by Lee Enterprises, recently announced it would be cutting back to printing just five days a week — before a public outcry caused the paper to reverse course.

This is the state of Wisconsin media as it faces one of its largest crises in a century — a time when information is more necessary than ever.

“Absolutely if you live in a news desert you’re living in a vacuum, there’s none of the most essential community information needs,” says Lewis Friedland, a journalism professor at UW-Madison. “It’s a void, other than what you pick up on social media, which of course may only be partly true and partly rumor.”

“Not only are you not getting valid, verified information from official sources that sorts out official claims that may or may not be true, you’re much more susceptible to rumor,” he continues. “You’re much more likely to worry — ‘I don’t know what’s going on.’ This increases the stress on everyone. There are very real, tangible effects. There’s absolutely nothing positive, period, particularly in relation to the pandemic, about living in a news desert.”

Of the 18% of Americans who get their news from social media, about a quarter of them, 26%, say they know a lot about a conspiracy theory that powerful people planned the COVID-19 pandemic. An even greater portion, 81%, say they’ve heard at least “a little” about the conspiracy theory.

Menominee County, which is really the tribal lands of the Menominee Nation, is 90% forest and the only county in Wisconsin without an independent newspaper.

There are currently nine active cases of COVID-19, according to the Shawano and Menominee Counties Health Department. But because the population is so low — about 4,500 according to census records — the Wisconsin Department of Health Services lists it as having a high COVID-19 activity level.

With no newspaper, the tribal government needs to adapt its information ecosystem to get the best information out there about the pandemic. There’s Facebook and the tribe’s in-house new source, the Menominee News, as well as access to people’s email inboxes.

John Teller, former chairman of the Menominee Tribe, says the emails from the tribal government have done a good job keeping him informed about the pandemic.

“I think there’s been major collaboration between the tribe and the much smaller county,” Teller says. “All the agencies are working together. If you have an email, that seems to be the biggest way they’re communicating — daily emails and messages and updates, and very effective communication.”

The tribal government feels that it’s been able to keep its community members informed about the pandemic, and that otherwise people get their news from cable or local TV news, according Vaughn Bowles, public information officer for the Menominee Nation.

“For the most part, because it’s such a tight-knit community, they’ve been able to send information pretty evenly without a regular or standard newspaper involved,” says Bowles.

To be sure, the tribal government communicated early and often about the pandemic and instituted a mask mandate before many surrounding counties and the state government. But in the last week of July, cases on the reservation nearly doubled, going from ten cases to 16 in two days.

Seven cases were linked to one indoor event and a healthcare worker at the Menominee Tribal Clinic tested positive.

“The Covid 19 epidemic is getting worse, not better,” Dr. Amy Slagle of the Menominee Indian Tribe of Wisconsin incident command wrote in a newsletter on July 25. “The reason for this worsening is humans denying reality and making harmful decisions. Most of these decisions are not based on malice, but based on disbelief or denial of facts. These decisions are happening in government, in work places, in public places, and at our kitchen tables. Some of these decisions are wide-ranging such as governments not responding to protect its citizens, others are seemingly small, like deciding to go to a bar, or take off a mask. Each decision risks the lives of many.”

While the tribal government runs the Menominee News and has been able to communicate through social media, email and word of mouth, there are some functions that can only be held by an independent news outlet, according to Friedland.

The Menominee News, as part of the government, has broad editorial latitude, Bowles says, but he can’t remember it ever being very critical of the government. The paper is also only a print product and its Facebook page, even though it has more than 12,000 followers, largely just shares information from other government sources.

An independent newspaper fills a watchdog role. Holding the government accountable and making sure it keeps people safe — in addition to functions of practical information such as which government buildings are closed and where a mask is necessary.

“The short answer is, it’s not that there are no mechanisms,” Friedland says. “Of course you can put it up on a website, but first, not all people have internet access. If you don’t have a newspaper you’re also less likely to have internet access. Even if a county puts up a set of statistics, an Excel sheet that shows trends in infection, people are not statisticians.”

“Part of the reason we have journalists is to take data and policy and try to interpret and ask questions about them and then write stories so people can understand those patterns and understand what they mean,” he continues. “Even if Menominee County is doing a pretty good job of putting up timely information, that’s not a substitute for local journalism.”

Bowles says that even though the Menominee News isn’t frequently critical of the actions of the tribal government, there is so much turnover in the administration and legislature that if someone has a problem with a decision they can run for office and influence it from the inside.

Besides, he says, it’s not as if the tribal government wouldn’t jump at a chance to have an independent media outlet — it just needs to be economically viable.

“I’ve talked with administration about different things like that and various economic projects,” Bowles says. “The one we most worry about is being able to economically support something like that. Given there’s only 4,600 people in the county, that’s not a huge base to be able to support local news.”

The Menominee reservation isn’t alone in struggling to find a way to support a local news outlet. There’s not a large enough base of subscribers or enough advertisers in places across the country. Friedland, who says he isn’t sure of the path forward either, says it’s important that it’s found.

“Journalism or quality local news is a public need and a public good,” he says. “If a marketplace can’t supply that public good there has to be some other mechanism put in place.”