A protester holds her hands up as she stands in front of the line of riot police. (Henry Redman | Wisconsin Examiner)

Less than 24 hours after Kenosha police officers shot Jacob Blake seven times in the back, members of the community were looking for answers.

On Monday afternoon, those residents were demanding an explanation from Mayor John Antaramian. Protesters surrounded the mayor outside the Kenosha Public Safety Building as they repeatedly asked for justice and he attempted to explain the process for investigating the incident, speaking through a megaphone to the crowd.

But eventually he handed back the megaphone and turned toward the building. A line of protesters blocked the door as the crowd followed Antaramian. A scuffle broke out as the mayor and a Kenosha police officer tried to force their way through the line, with the crowd continuing to ask, “Where are you going?”

What started as some shoving quickly escalated as one protester at the front pointed to the police officer and yelled, “He’s got his gun, he’s got his gun.” 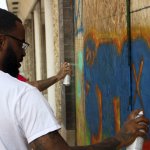 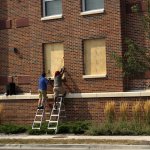 Most of downtown Kenosha was boarded up Monday afternoon. (Henry Redman | Wisconsin Examiner) 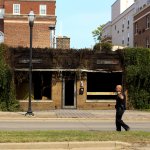 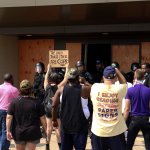 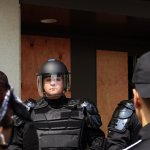 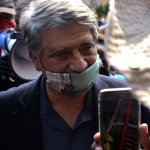 Mayor John Antaramian heads back inside after attempting to speak with protesters, a scuffle broke out shortly after. (Henry Redman | Wisconsin Examiner) 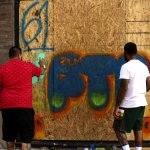 Two tattoo artists paint the plywood covering the windows of the shop they work in. (Henry Redman | Wisconsin Examiner) 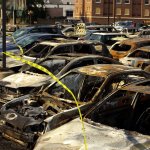 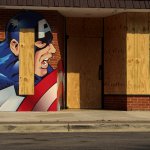 As the mayor and the officer forced their way into the building, the door — already boarded up — broke off its hinges and through the doorway protesters could see a phalanx of Kenosha riot police heading toward them.

The armored officers had barely gotten their helmeted heads through the doorway when they started randomly pepper spraying the crowd. With the protesters forced back, the officers formed a line around the door.

As some protesters flushed out their eyes with milk, those unaffected got right in the faces of the riot police, hurling insults, chants, questions and a water bottle. The protest at the door of the police station continued for another 45 minutes before protesters retreated to Civic Center Park, resting in the shade as they prepared for another long night of pressing for change and answers.

Blocks from the park, Kenosha’s business owners attempted to pick up the pieces of a downtown that had been damaged in the previous night’s protests. The streets of downtown smelled of fresh plywood and the sound of power tools echoed down the streets as news helicopters circled overhead.

On 58th Street, Court Burrell was inside his tattoo parlor giving a customer a tattoo while two of his employees were outside spray painting the plywood on the storefront’s windows.

Burrell, who is Black, said his store wasn’t touched on the first night of protests as he sat inside to protect it. A friend suggested it may have been because it’s a Black-owned business. Looking down his block, he pointed out that every storefront was boarded up, which is why he let his tattoo artists paint the plywood.

“It’s a tattoo studio, they’re artists,” he said. “Look at how ugly this shit is.”

As his employees painted “FTP” and “BLM” on his storefront, Burrell said the shooting of Blake was “f-ed up,” and wondered why the cops didn’t just tackle him, considering there were three officers at the scene.

The message the artists were spray painting  speaks for itself, he said.