Democratic presidential candidate Joe Biden released a video Wednesday in which he condemned the police shooting of Jacob Blake in Kenosha, and related the condolence call he made to the Blake family.

Once again, a Black man — Jacob Blake — was shot by the police. In front of his children. It makes me sick.

Is this the country we want to be?

Needless violence won’t heal us. We need to end the violence — and peacefully come together to demand justice. pic.twitter.com/WdNqrxA3PK

“Once again a Black man, Jacob Blake, has been shot by police in broad daylight with the whole world watching,” Biden said.

“Put yourself in the shoes of every Black father and Black mother in this country and ask, is this what we want America to be? Is this what we should be?” Biden said into the camera.

Biden called for ending systemic racism and also added, “Burning down communities is not protest. It’s violence.” He quoted Blake’s mother, who he said told him that vandalism and violence in Kenosha “doesn’t reflect my son or my family.”

From the stage at the Republican National Convention came a completely different message, as Vice President Mike Pence declared, “The choice in this election is whether America remains America.”

“Joe Biden says that America is systemically racist and that law enforcement in America has, and I quote, an ‘implicit bias’ against minorities,” Pence said incredulously.

Calling out Kenosha specifically, Pence claimed that Biden is “supporting the very policies that are leading to violence in America’s cities,” adding, “The hard truth is you won’t be safe in Joe Biden’s America.”

Whatever Pence means by making sure “America remains America” it’s clear that that vision does not include making Americans safe. The Republicans are rooting for a race war, stirring up paranoia, racial animus, and violence in real time during their convention week. And that is leading directly to the very violence they pretend to deplore.

The choice to feature the gun-toting McCloskey couple on the first night of the convention — celebrating their felony charges for pointing loaded guns at Black Lives Matter protesters — encourages precisely the kind of attack that took place in Kenosha.

Fear of Black Lives Matter protesters is the Republican campaign theme for 2020.

But the victims of violence in Kenosha so far include Blake, a black man who was shot in the back by police seven times, and the three protesters apparently shot by a white teen who was a self-styled militia member and Blue Lives Matter enthusiast.

That teen, according to Buzzfeed, sat in the front row at a Trump rally in January, and posted a TikTok video of the event.

Pence neglected to mention him, or the fact that he shot and killed two protesters and put a third one in the hospital.

The violence in Kenosha is “entirely on Gov. Evers’ shoulders,” Assembly Speaker Robin Vos told a conservative talk show host in an interview on The Jay Weber Show on WISN (1130 AM).

“Those people did not have to die, and because of Tony Evers’ actions, they’re dead,” Vos added, with a sympathetic nod to murderous militia: “People are literally dead because folks have had to take to themselves to try to protect their own property.”

The Kenosha police chief  took that message one step further, as Henry Redman reports, literally blaming the deceased victims of the shooter during a press conference in which he noted that the protesters would still be alive had they obeyed the city’s curfew; meanwhile, the county sheriff vowed to get more “assertive” in policing the protests.

It’s a stark and scary vision the Republicans are selling. And why not? They can’t run on the economy or the great job they’ve done getting us through the pandemic. They figure if they can scare people enough, we’ll lose our ability to think. It’s their best shot to win. 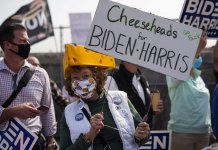 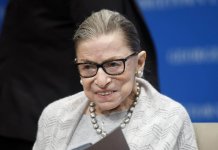 RBG is gone. This is why we fight. 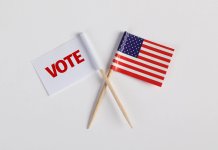 A stark and scary vision for America