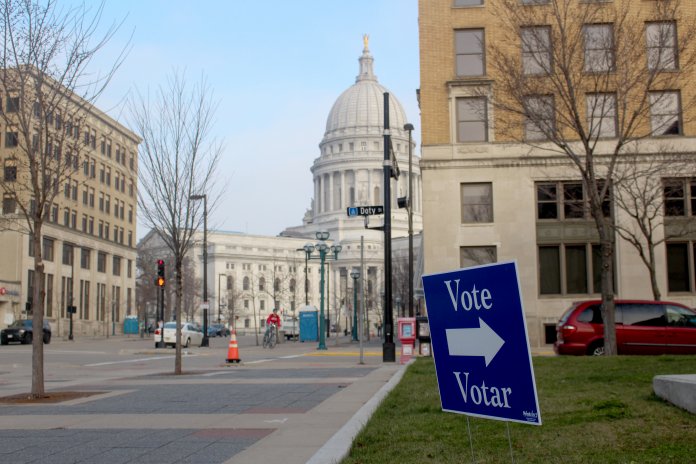 Wisconsin’s April 7 election was marred by chaos and confusion. But the Wisconsin Elections Commission said in a report released Tuesday that it has learned important lessons this year and is prepared for this fall’s presidential election

The state held its spring election just weeks into a shutdown ordered by Gov. Tony Evers in response to the COVID-19 pandemic.

Voter behavior propelled a massive shift toward absentee voting, with 60% of the electorate mailing in their ballots — compared to 6% absentee voting in previous elections. Court decisions and executive orders, along with the refusal by the state Legislature to change the election date, added further problems. A severe shortage of poll workers led to the National Guard being called in to serve at polling locations across the state and the consolidation of locations in Milwaukee from 180 to five resulted in voters waiting in lines for hours. Some voters who requested their ballots by mail never received them and some didn’t have enough time for their ballots to be returned.

But despite all those challenges, Wisconsin’s April 7 election had almost record-breaking turnout — trailing only the 2016 presidential primaries when both major parties had competitive elections.

The WEC and local election officials say that the April election, along with the May special election in the 7th Congressional District and the August primary election, gave administrators valuable information for the November vote — in which Wisconsin is set to play a major role.

The report, “How Wisconsin is Prepared for the November 3 Election,” documents a number of areas in which systems have been improved. It also lays out the plans for how local clerks in municipalities big and small across the state can hold a safe and fair election.

“Our state maintains a solid and diverse elections infrastructure consisting of high-tech cybersecurity and the low-tech resiliency and resourcefulness of Wisconsin election officials,” the report states.

With absentee voting expected to again be extremely popular, the report details a number of ways in which the process for requesting, mailing and receiving ballots through the mail has been improved.

The MyVote website used by voters and clerks to request and send ballots has been upgraded and user interfaces have been simplified while also providing voters with more information about what step their ballot is at in the voting process, the report states.

Because long waits plagued voters in Milwaukee and Green Bay in April, the report includes specific plans from election officials in the state’s three largest cities.

The report also shows that elections officials believe absentee ballots will be counted on election night. In April, votes weren’t counted until a week after in-person votes were cast because of a court decision extending the deadline. In November, ballots will start to be counted that night like in normal elections. Although the Associated Press will begin to project winners that night, official results won’t be available until municipal boards of canvass are completed.

The executive director of the Milwaukee Election Commission, Claire Woodall-Vogg, says that although she was not in charge in April, the process will be smoother in November.

Woodall-Vogg also wrote that she anticipates all absentee ballots will be counted on election day.

Madison, which is continuing to recruit poll workers, said that it is increasing the amount it will pay poll workers to $21.79 per hour. Madison says it will have at least 92 polling locations open and absentee ballots should be able to be counted on election night.

Green Bay City Clerk Kris Teske said that the number of polling locations has yet to be decided, but she too hopes absentee ballots will be processed by 8 p.m. on election night.

With the COVID-19 pandemic still ongoing, the report includes a number of sections on how elections officials are planning to keep voters and poll workers safe. Among other supplies, the state has acquired and delivered 125,000 masks, 300,000 ounces of hand sanitizer and 1 million ballpoint pens, according to the report.

Additional supplies will be sent after a survey of local clerks is completed in September.

After shortages of poll workers in April — because most pools of available workers consist of people over 60 who are especially vulnerable to the virus — the National Guard was called in to fill in the gaps. As of Aug. 21, the WEC is expecting to need about 1,100 service members to help at the polls in November.

To avoid needing so many National Guardsmen, the WEC also gave a number of recommendations for recruiting local poll workers. The options included using local and state government employees, students and staff at local schools and universities and working with local civic organizations to attract workers.

Before the COVID-19 pandemic created a run on absentee ballots and the potential challenges of moving to a mostly mail-in system, the concern most concerning to the majority of Wisconsin voters, according to a survey conducted for the WEC, was election security.

With an election system increasingly relies on more technology and there is widespread concern over foreign interference in the election, the report outlines how the WEC works with local, state and federal experts to assess the “threat intelligence.”

Due to training, exercises and upgraded technology, the WEC report states that Wisconsin election officials are confident in the security of the election.

“For the last three years, the WEC has been working tirelessly to improve the security maturity of the entirety of Wisconsin’s elections framework, down to the smallest towns. These improvements have been tested by several elections and dealt with some minor incidents at local levels. …WEC staff is confident that Wisconsin is prepared to provide its most secure presidential election to date and stands behind the integrity of its results.”