A tax-exempt lobbying group with close ties to the Republican Party spent nearly $1 million to help elect 13 GOP lawmakers in the 2016 and 2018 election cycles — without filing required reports, according to a complaint filed Tuesday with the federal Internal Revenue Service.

The Jobs First Coalition (JFC), founded in August 2009 and exempt from taxes under Section 501(c)(4) of the federal Internal Revenue Code, transferred $920,000 in the tax years of 2016 through 2018 to a separate political fund it operates, states the complaint, filed by the Campaign for Accountability in Washington, D.C.

Contrary to IRS requirements, the complaint states, “JFC failed to report any of this political campaign activity to the IRS.”

Instead, the Campaign for Accountability complaint states, “JFC reported to the IRS — under penalty of perjury — that it spent nothing on political campaign activities between 2016 and 2018.”

The money was transferred to the Jobs First Coalition Political Fund, which was established in 2013 and made independent expenditures on behalf of Republican legislative candidates and against their Democratic challengers in the 2016 and 2018 elections.

Under Wisconsin campaign finance law, organizations that make independent expenditures in political campaigns must file an itemized report of the contributions they receive, identifying each donor and the amount it has contributed, with the Wisconsin Ethics Commission.

The Campaign for Accountability, a nonpartisan government watchdog group, previously uncovered omissions on Statements of Economic Interest that Assembly Speaker Robin Vos (R-Rochester) filed with the ethics commission. Vos’s office responded saying that the omissions were an oversight that would be corrected.

“Altogether during tax years 2016 through 2018, JFCPF received $920,000 in contributions from JFC and it used those funds to pay for hundreds of thousands of dollars in independent expenditures in Wisconsin Assembly races and to pay for the administrative expenses of JFCPF,” the complaint states.

The regulations define “direct” activity expenditures that advocate for or against political candidates, and “indirect” as payments for fundraising costs and administration.

On the Jobs First Coalition’s Form 990 tax returns for 2016, 2017 and 2018, JFC stated “that it did not engage in any ‘direct or indirect political activities,’” the complaint states, and the organization did not include a Schedule C listing political expenditures for those years.

“JFC executive director Robert P. Reddin — who was simultaneously serving as the treasurer of JFCPF — signed each of the tax returns under penalty of perjury,” the complaint states. “Moreover, Mr. Reddin stated on each of the tax returns that he had reviewed ‘the forms and engaged in discussions with consultants and legal counsel to insure accuracy.’”

The Campaign for Accountability’s IRS complaint includes a footnote that Reddin, a former Brookfied alderman, served as treasurer for the political fund until Jan. 14, 2020. The most recent registration document that the political fund filed with the Wisconsin Ethics Commission identifies Mary Jo Baas as treasurer of the fund effective Jan. 14, 2020. Baas, a former staff member of the Republican Assembly caucus, is also listed as president of the Jobs First Coalition on the coalition’s Form 990 tax returns through at least 2018.

The Wisconsin Examiner sent an email message Tuesday morning to the Jobs First Coalition Political Fund’s email address that is listed on the fund’s registration statement with the ethics commission, and left a voicemail message at the telephone number listed on the same statement. The organization did not respond before publication time for this article by mid-afternoon.

Late in the day on Tuesday, Reddin sent an email message in response to the complaint: “We are reviewing our 990 filings and if any amendments need to be made, we will make them promptly.  We take transparency and compliance seriously.”

According to the Campaign for Accountability’s IRS complaint, the Jobs First Coalition solicits donations from the public, but “there is nothing on its donation page to indicate that donations would be treated as anything other than donations to a Section 501(c)(4) organization – there is no mention of donations being treated as political contributions or membership dues.”

The complaint states that “there is no reason to believe JFC informed its supporters that their donations would be treated as either political contributions or membership dues earmarked for a political committee.”

The complaint adds: “Accordingly, it appears that for tax years 2016 through 2018 JFC solicited donations from the general public, deposited those donations into a general fund and then transferred $920,000 to the JFCPF for direct and indirect political campaign activities. While a Section 501(c)(4) organization may engage in such political campaign activities, they must be reported to the IRS. Here, they were not.”

The complaint charges that the omissions amounted to violations of federal tax laws against filing to report direct and indirect campaign activities by the nonprofit organization, as well as laws against false reporting, concealing material facts from the IRS, and perjury. Potential penalties could include up to three years in prison and a fine of up to $100,000, the complaint states.

For the most part the money was spread around. One candidate — state Rep. Todd Novak (R-Dodgeville) — was a beneficiary in both cycles.

The Wisconsin Democracy Campaign reported that in 2016 the Jobs First Coalition Political Fund spent $538,057 on independent expenditures that favored Republicans and opposed Democrats in races for six seats in the Assembly and one in the state Senate.

All seven Republican candidates that benefited from the fund’s spending won their races. In the Assembly, along with Novak, they were State Reps. Scott Krug, Lee Nerison, Jessie Rodriguez, Patrick Snyder and Rob Summerfield. The fund spent money on advertising favorable to them as well as on ads attacking their Democratic challengers.

Another beneficiary was state Sen. Dan Feyen. All of the political fund’s spending in his race was for advertising attacking his Democratic opponent, Mark L. Harris.

In 2018, the fund spent $683,417 on eight races: seven in the Assembly and one in the state Senate. In five of those races, the fund spent only on attack ads against Democratic challengers. The beneficiaries in those races were Republican state Reps. Mike Kuglitsch, Amy Loudebeck, Robert Wittke and Jon Plumer, and state Sen. Dale Kooyenga.

The only Republican favored by the fund who lost in 2018 was Matt Adamszyk, in the 14th district. The fund spent $26,033 to support Adamszyk and $74,637 to attack Robyn Vining, the Wauwatosa Democrat who won the seat.

In the 2016 legislative elections, “the group even sponsored ads that praised incumbent Republicans for voting against GOP Gov. Scott Walker’s 2015-17 state budget, ostensibly because it did not adequately fund public schools and the University of Wisconsin System,” the Democracy Campaign report states. “The group also condemned Democrats for supposedly supporting the federal health care program dubbed Obamacare.”

The Democracy Campaign’s 2016 report also looked at the Jobs First Coalition itself.

The Jobs First Coalition was among the conservative groups that were part of a John Doe investigation on allegations that Walker’s campaign illegally coordinated with issue advocacy groups during recall elections aimed at Republican lawmakers and Walker in 2011 and 2012. In 2015, the Wisconsin state Supreme Court blocked the investigation on a 4-2 vote, in a ruling that concluded coordination between candidates and issue ad groups was legal.

The IRS rules that govern the Jobs First Coalition allow the 501(c)(4) group to sponsor political activities “as long as those activities are not its primary mission,” the Democracy Campaign report observed.

“But the organization appears to do little in the way of non-election activities. It has never been a registered lobbying organization, like other special interest groups, that spend time and money lobbying the legislature and governor on state policy and spending, even though the group’s website says it ‘regularly monitors legislative and regulatory activities in Wisconsin and takes positions on a variety of public policy matters,’” the Democracy Campaign report states. 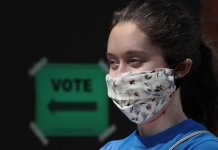