Even as Speaker Robin Vos and Majority Leader Scott Fitzgerald engage in another battle to toss out a mask requirement extended by Gov. Tony Evers, the Legislature adopted a pro-mask policy for itself.

The invitation to Secretary of State Mike Pompeo — to give what host Senate President Roger Roth labeled a “foreign policy speech” and Democrats decried as a campaign stunt — had this unexpected line, given Wisconsin Republicans’ battles against mandatory masks:

“Social distancing measures will be employed and masks will be required for attendees. For those unable to attend, WisconsinEye has been requested to stream the Secretary’s remarks. Please join us in welcoming Secretary Pompeo to the Wisconsin State Capitol!” Roth had not responded to questions on the event at publication time.

The timing and venue of the secretary of state’s Madison visit led to more questions beyond Wisconsin’s borders, adding to a list of Pompeo events being scrutinized.

“The subject was hardly remarkable for America’s top diplomat. But the venue was: the state legislature in Wisconsin, one of the key swing states crucial to the reelection campaign of his boss and political patron, President Donald Trump,” wrote Shinkman, whose outlet reports Pompeo has made 11 taxpayer-funded official trips to U.S. destinations including a speech at an evangelical megachurch and the Family Leadership Summit in Iowa.

“Though Pompeo made a series of assertions – including repeating an unspecified claim that Beijing’s operatives have infiltrated parent-teacher association meetings – little of his speech pertained specifically to state lawmakers in Madison,” Shinkman continued. “And his touting the benefits of the Trump administration some 40-odd days before the presidential election riled critics, who accuse the secretary of state of an unprecedented and increasing willingness to blur the line between diplomacy and politics.”

Pompeo has had complaints filed against him for past speeches and conduct. And a number of legal and good-government groups raised questions following his Madison appearance.

“Campaigning for President Trump with taxpayer resources is just the latest example of Secretary Pompeo’s willingness to break the law and put his political interest above our national interest,” Castro said.

Wendy Sherman, director of the Center for Public Leadership at the Harvard Kennedy School, who was an undersecretary of state for former President Barack Obama, questioned the timing.

“I’m sure he’ll argue that he’s just talking about national security and foreign policy to an American audience, and he is. But he’s doing it in the midst of the most partisan political time of the four years of this presidency,” she told The Hill.

The problem, says these experts, is not only spending public resources on events that appear close to campaign speeches — it is that other countries might view Pompeo as representing just one party rather than the United States as a whole.

“Pompeo’s politicking, especially in his official capacity, undermines his ability to represent the United States across the world,” Donald Sherman, deputy director of the Citizens for Responsibility and Ethics in Washington (CREW) said to Vox. “He’s either America’s chief diplomat or he’s a political crony for one political party.” 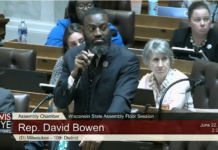