A years-long fight over whether states have the authority to regulate important aspects of drug pricing will be argued before the U.S. Supreme Court Tuesday morning.

At issue is whether prescription middlemen, known as “pharmacy benefit managers,” will have to bow to state authority over a huge swath of their business or if federal law preempts state regulation. Both sides in the litigation say that if the other wins, the result will be even higher costs for prescription drugs when their prices already are growing at three times the rate of inflation.

The magnitude of the case, Rutledge v Pharmaceutical Care Management Association, is illustrated by the parties fighting it.

They include some of the country’s largest corporations, including CVS Health, Cigna and UnitedHealth through their professional association. Aligned against them are 47 state attorneys general, the U.S. Solicitor General and professional organizations such as the American Medical Association.

The lead plaintiff in the case, Arkansas Attorney General Leslie Rutledge, said more than just the cost of drugs is in play.

“For many local pharmacies, this decision will determine the future of their family-owned business and the future of local healthcare access for millions of Americans,” she said in a conference call with reporters Thursday. “Now more than ever in the climate of our current pandemic, we must protect local pharmacies, which play a vital role as front-line health care providers in rural Arkansas and across the country.”

For their part, the pharmacy benefit managers, or PBMs, are saying that if Rutledge and the attorneys general win, the result will be a crazy quilt of regulation that can only result in higher prices.

Specifically at issue in the case to go before the high court is Act 900, a 2015 Arkansas law that takes certain powers away from PBMs such as CVS Caremark and Express Scripts to decide how much pharmacists will be reimbursed for the medicine they dispense. A U.S. district court and Eighth U.S. Court of Appeals sided with the PBMs, ruling that the Arkansas law is preempted by federal law.

States have imposed regulations on some PBM activities, such as those provided on behalf of Medicaid managed-care providers. The case going before the court on Tuesday asks whether self-insured plans such as those carried by many large employers are subject to state regulation, or if the federal Employee Retirement Income Security Act (ERISA) preempts them.

It all might sound arcane, but PBMs might be the most important part of the health care system you’ve never heard of.

They occupy the space between insurers, drugmakers and pharmacies. Hired by insurers, they create lists of preferred drugs and negotiate rebates from manufacturers in exchange for putting their products on the preferred-drug lists. They also create pharmacy networks and reconcile claims, usually reimbursing pharmacies for generic drugs using “maximum allowable cost,” or MAC, lists.

It’s this latter practice that is at the core of the case to go before the Supreme Court.

PBMs insist that their MAC-list reimbursements are objective and based on market forces. But the processes used to create them are opaque and many pharmacists believe the PBMs like CVS Caremark use them to benefit the parent company’s own retail pharmacies and drive smaller competitors out of business.

In Wisconsin, Gov. Tony Evers’ Task Force on Reducing Prescription Drug Prices has been looking at pharmacy benefit managers as a way of lowering prescription drug prices. And in the last legislative session Rep. Michael Schraa (R-Oshkosh) and Sen. Jon Erpenbach (D-West Point) introduced bipartisan legislation to curtail out-of-pocket drug costs by reducing their influence, and the bill passed 96-0 in the Assembly. It had a hearing in the state Senate, however the legislation died because it was not taken up in the Senate before the end of the session in April.

Dan Stause, the president of Hometown Pharmacies, which has more than 65 locations in Wisconsin, wrote an opinion column earlier this year supporting the legislation, saying it would provide “the PBM transparency necessary to ensure patients, health plans and taxpayers are getting the best price possible for prescription drugs while preserving patient access to local Main Street pharmacies. With a highly polarized political landscape, this is one health care reform that enjoys widespread bipartisan support.”

But an analysis in Ohio showed that in 2017 PBMs CVS Caremark and OptumpRx used MAC lists to bill the state Medicaid system almost a quarter billion dollars more for generic drugs than they paid the pharmacists who dispensed them.

Also in Ohio, community pharmacists reported that in late 2017, CVS Caremark reimbursements for generics dropped well below their costs and then another arm of the corporation sent letters offering to buy them out. CVS denied any improper coordination between different parts of its business. The company also has consistently denied that it abuses its price-setting power.

But Doug Hoey, CEO of the National Pharmacists Association, said that in the two years leading up to the coronavirus pandemic 2,000 — or 4% — of all U.S. pharmacies have closed. In small-town and rural communities in Ohio, Arkansas and elsewhere, some of the closures have created pharmacy deserts, where people lost their closest, most frequent point of contact with the healthcare system.

The problem is only growing, Hoey said. The big three PBMs control more than 70% of that marketplace and a recent wave of blockbuster mergers with insurance companies have left CVS Health the fifth-largest corporation in the country, OptumRx owner UnitedHealth Group the seventh largest, and Express Scripts owner Cigna the 13th largest, according to Fortune.

“Imagine if the New York Yankees had the power to make their own rules and supply the umpires for the game,” Hoey said.

For their part, the PBMs maintain that they serve insurers — and those who ultimately pay for healthcare — by forcing down the prices charged by drugmakers, wholesalers and pharmacists.

“What’s at stake in this case are efficient and consistent employer-provided healthcare benefits for employees and their families, no matter where they live,” Lopes of the Pharmaceutical Care Management Association said.

With the case, the Supreme Court will be challenged to bring consistency to the Employee Retirement Income Security Act where it hasn’t previously existed, Ronald Mann wrote Friday in the influential SCOTUSblog.

“ERISA has a notoriously broad preemption provision that prohibits states from enacting laws that ‘relate to any employee benefit plan’ covered by ERISA,” he said. “That provision generally reserves the regulation of such plans to Congress, but its scope is often unclear.”

However, Arkansas Attorney General Rutledge said that continuing to block state officials from regulating PBMs will only allow PBMs to continue such practices as forcing patients to use PBM-owned mail-order pharmacies and other practices that are driving hometown pharmacists out of business.

State works to ramp up community testing for virus 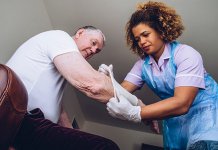 Big fight over drug pricing heads to the Supreme Court