Rev. Richard Shaw recalls growing up in Alabama and hearing of Jimmie Lee Jackson, murdered by police while marching for voting rights in 1965.

Shaw’s mother ran a café in Marion, Ala., that was a center for Civil Rights organizing, and brought him up with accounts of the movement.

Seeing the challenges that Black and brown voters have encountered trying to  exercise their right to vote — voter identification requirements, unexpected changes in polling places and, last April, the reduction of polling places in Milwaukee to just five locations because poll workers dropped out for fear of being exposed to COVID-19 — brought that struggle unexpectedly close to home for the Milwaukee pastor.

“It’s one thing to hear those stories,” says Shaw. “But it’s another thing right now to experience it.”

Shaw and his congregation at St. Matthew Christian Methodist Episcopal Church in Milwaukee have engaged in voting rights activism for years. But it has become especially important in the 2020 election, Shaw says — especially with reports this year of potential voter intimidation.

“When we have leaders that do not denounce white supremacist groups, that’s disheartening,” says Sylvester Williams, a bishop in the same denomination as Shaw and who joined him in a conversation with the Wisconsin Examiner. “It feels like we are going backwards rather than forwards.”

On Monday, Oct. 26, the two were among the cohosts of an online training session on resisting voter suppression for activists in faith and community groups from nine states, including Wisconsin. The training program was provided by the Lawyers Committee for Civil Rights. It was cosponsored by Sojourners, a Christian social justice media and mobilizing group, in collaboration with the National African American Clergy Network and as part of their Turn Out Sunday and Lawyers and Collars projects.

“We want to help people to identify something that just might be suspicious activity” targeting voter rights, says Williams. That might include strangers filming people standing in line to vote, or the presence of outside groups who aren’t there to vote but may be seeking to intimidate voters.

The training included reminding participants about the rights of every voter, tactics to respond to suppression attempts and a look ahead to the time after Election Day.

For voters who go to the polls on Election Day, participants will provide support. If voters aren’t on the list of those registered for that polling place, for example, volunteers will help them find out where they are registered and how to get there. They’ll also intervene to help voters who are targets of  intimidation.

“We’re making sure everyone has the critical information that we need,” Shaw says. “We just want to make sure that we’re on the ground and protecting the right to vote for individuals as well as report anything we may see that may cause physical harm to individuals.”

“The key thing will be identifying and helping to resolve [conflicts] peacefully,” Williams says.

The protests that have taken place regularly in Milwaukee and other cities beginning with the police killing of George Floyd in Minneapolis have helped energize the Black community about the 2020 election, Shaw and Williams agreed.

“I have seen individuals being involved who were usually not involved,” Shaw says. “This was a wakeup for all people.”

The police shooting of Jacob Blake in Kenosha in August “added fuel to an already existing fire,” says Williams.

Williams recalls video and photos of the 17-year-old white youth who walked freely down a street in Kenosha after killing two people who were protesting police brutality there and wounding a third. The assailant, Kyle Rittenhouse, was arrested at his home in northern Illinois the next day and is being held in detention there while his lawyers fight prosecution efforts to extradite him to Wisconsin to stand trial on homicide charges.

“Who would think of Black and brown people walking down the street with an assault weapon, and nothing would happen?” the bishop asks rhetorically.

When the election is over, the work of encouraging continued participation in the community and securing voting rights for the long term will remain.

“Our effort,” Williams says, “will be efforts that need to continue — to make sure that the pendulum does not swing backwards again.”

A Milwaukee church prepares to resist attempts to undermine democracy

While one group of faith activists spent time this week learning how to protect voters on Election Day, members and friends of the First Unitarian Society in Milwaukee were training in how to protect the election outcome.

“At best this election is going to be chaotic and confusing,” says Rev. Jennifer Nordstrom, senior pastor of the Unitarian Universalist (UU) congregation. “And at worst, we might see an undemocratic grab at power — what you would call a coup.”

That worst-case scenario could sound alarmist were it not for recurring statements from President Donald Trump casting doubt on whether he’ll respect the election outcome if former Vice President Joe Biden, the Democratic candidate, wins when all the votes are counted.

“We have a fire drill every single year. And it’s not because we’re alarmingly expecting a fire to happen every year — it’s because part of safe practice is making sure our people know what to do in the event that the worst happens,” Nordstrom says. “Emergency preparedness is not alarmist — emergency preparedness is just making sure you’re ready.”

Protecting democracy is central to the religious identity of Unitarian Universalists, whose pluralistic faith is centered on seven principles rather than a specific creed or dogma. Among those principles are an affirmation of the inherent worth and dignity of every person; justice, equity and compassion; and freedom of individuals to reach their own conclusions about religious truth.

“Our fifth principle affirms the right of conscience and the use of democratic processes in our congregations and in society at large,” Nordstrom says. “This is part of our faith practice: our commitment to democracy.”

Nordstrom was persuaded of the risk that the country faces in the days following Nov. 3 by the report produced by the bipartisan Transition Integrity Project. In a Washington Post article, Georgetown University law professor Rosa Brooks, a cofounder of the project, described a series of simulations that participants conducted based on various election outcome scenarios.

“With the exception of the ‘big Biden win’ scenario, each of our exercises reached the brink of catastrophe, with massive disinformation campaigns, violence in the streets and a constitutional impasse,” Brooks wrote.

The credibility of the participants “really had me taking it seriously,” says Nordstrom. Research on real-world coups and coup attempts showed the urgency of responding quickly, but also the success that citizens can have in blocking them with nonviolent action.

Coups “happen very quickly — in three to five days,” she says. “And 50% of those coups fail. And in almost all of the failures, civilian response — a massive show of regular people in the streets — was decisive in the failure.” Research she read showed that 3-1/2% of the population showing up to insist on respect for the democratic process was enough to thwart a coup.

About 125 people registered to take part in the training webinar that the church held Monday evening, including 30 from other congregations. The training focused on understanding nonviolent civil disobedience, democracy and what it means to have a coup. “Nonviolent civil disobedience has a long history in Unitarian Universalism,” Nordstrom observes, “With Henry David Thoreau writing the book on it, literally.”

She describes the training session as “very much the basics, but trying to build relationships, so that people would feel more confident, being able to link arms with other people they trust, other people of faith in the city, if they were called out into the street.”

On Election Day, Nordstrom will be joining other clergy in a project similar to, although separate from, the Turnout Sunday/Lawyers and Collars project — “going out to do de-escalation at the polls in Milwaukee,” she says — “to try to make sure that people have access to vote that is a safe, sane and maybe even joyful process.”

The next day, on Nov. 4, her congregation will be prepared to join those taking part in Milwaukee in one of hundreds of “Protect the Results” gatherings around the country “to demand that all the votes are counted and for the peaceful transition of power” if the president acts to undermine the election results, according to the organizers.

“That’s the way I see it is that that’s just doing our part,” says Nordstrom. “We’re going to follow the leadership of people who are experts in this area. But if they say, ‘Okay, this is the real deal, time to come out into the streets,’ we’ll be able to get our hundred people and be part of the millions that will show up.” 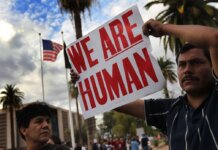 After a bitter election, forgive and forget?

Acting on faith to protect voters and the vote

Church groups prepare to ward off suppression at the ballot box, and to resist attempts to overthrow the election