Circuit Court Judge Frank Remington was right to toss out the victims’ rights amendment known as Marsy’s Law, which passed with 75% of the vote in Wisconsin in April.

In a carefully reasoned 36-page decision, Judge Remington noted several flaws with the amendment, and the wording of the question.

The primary, substantive problem he cited was that voters weren’t informed that Marsy’s Law was taking away some of the fundamental rights of the accused, as guaranteed by the Wisconsin Constitution.

“The sole purpose of this opinion is to hold that if the provisions relating to the rights of the accused are to be repealed from the existing State Constitution it was constitutionally required that the voters be asked that question directly,” he wrote.

For instance, the voters weren’t told that Marsy’s Law took away the Wisconsin Constitution’s guarantee of “the right to a fair trial.” As Judge Remington noted: “There used to be an explicit reference in the State Constitution that persons accused of a crime had a State Constitutional right to a ‘fair trial.’ That language is gone. It is hard to view the change as only being symbolic.”

The accused also lost the right, guaranteed in the Wisconsin Constitution, “to exclude witnesses from hearing other witnesses testify,” which, he noted, “for generations has served the important interest of promoting truthfulness in witness testimony.”

And he expressed the opinion that, had this been spelled out, the citizenry may have voted differently. “It is hard to imagine that when informed that the words in the State Constitution referencing a ‘fair trial’ were to be deleted, there would be anybody that would think that information was nonessential,” he wrote. “More likely, many voters might pause before voting to delete what should be a universally accepted proposition.”

But his main point was that the proponents of Marsy’s Law needed to spell out the erasure of the rights of the accused. Judge Remington cited a Wisconsin statute that says amendments “must reasonably, intelligently, and fairly comprise or have reference to every essential of the Amendment.”

That didn’t happen here, he said.

“Voters deserve to know what they are voting on,” he wrote.

He concluded: “IT IS HEREBY ORDERED AND ADJUDGED, that the question on the ballot did not meet all constitutional and statutory requirements as to the content and form necessary to adequately inform the public on the purpose of the amendments upon which they were voting.”

He then stayed his order, pending appeal.

Stop blaming people of color for the 2020 election mess 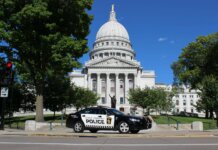 Immigration advocates push Biden to not just bring back DACA but...

Stop blaming people of color for the 2020 election mess