(*This developing story will be updated)

Biden has a 5,,587-vote edge in the Keystone State, based on the current numbers, according to a source at the Department of State.

The race remains too close to call, but NBC News reports that Biden leads 49.4 to 49.3 percent.

Here’s a look at Pennsylvania:

As evidenced by the tightening margins between Trump and Biden in the Keystone State, the prediction that the mail-in balloting was expected to break Biden’s way is holding fast. Biden has recaptured two of the counties that Trump flipped in 2016: Erie and Northampton counties. Trump was the first presidential nominee since 1984 to carry the northwestern Pennsylvania county, GoErie reports. Trump beat Hillary Clinton back then by 1,957 votes. Going into Friday morning, Biden led Trump 66,966 votes to 65,647, GoErie reported, citing unofficial results from the Erie County Board of Elections.

Despite Trump’s baseless assertions during a White House press conference on Thursday, there is no evidence of fraud among the millions of mail-in ballots that have been cast nationwide. Nor are election workers “finding” votes for Biden in the Keystone State or anywhere else, as Trump asserted without evidence during his rambling, falsehood-riddled address. MSNBC broke away from Trump after his first sentence began with a lie. Fox News stayed with the entire news conference. We fact-checked the news conference in real time. You can find it on our Twitter feed. 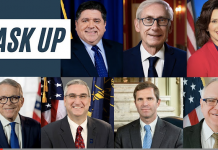 REPORT: Biden takes lead in Pa., in range of the presidency