Dallas Police Major Malik Aziz is a well-liked member of the department’s top brass with the support of the city’s activist community despite widely acknowledged systemic problems in the department. Now, Aziz is one of three finalists in Milwaukee’s search for a new police chief.

The question is, can he bridge the gap between activists and cops in a city that is not his hometown? Especially at a time when the criminal justice system is under intense scrutiny and community organizations in Milwaukee push for change.

“We’ve reached a critical time in Milwaukee as the next leader of the Milwaukee Police Department is chosen,” Tomás Clasen, community engagement manager of the ACLU of Wisconsin, said in a news release. “Our next police chief needs to be a person who will not only address the systemic racism in Milwaukee policing, but be transparent and accountable going forward, and rebuild police and community relationships in Milwaukee. Not only should the community and its needs be a top priority for the next police chief, the community’s input should be heavily considered throughout the entire process.”

Aziz is from Dallas and has served in the police department since 1992. He’s worked as a patrol officer and a deputy chief. He’s currently the commander for the city’s Northeast Division and is the former executive director of the National Black Police Association.

Last time Dallas had a police chief vacancy, Aziz was one of the options and has been named a finalist in other nationwide chief searches.

But as is the case in many American cities, reform-minded leadership doesn’t necessarily mean the police department is adequately protecting the community it serves. An ACLU Texas report released this summer highlighted seven key issues over how the Dallas Police Department overpolices people of color in the city.

That report pointed to a history of fatal police shootings of people of color, disparities in arrests and traffic stops and a budget that spends millions of dollars to lock up non-violent and low-level offenders.

“The reforms that are being offered, generally, by the reform-minded chiefs, they’re not bad but they’re no match for the deep vein of brutality and racism in these departments,” longtime Dallas community organizer John Fullinwider says. “There’s a Derek Chauvin in every department in the country. So I would say that Aziz has both the pros and the limitations of the current generation of reform-minded police leadership.”

Fullinwider pointed to police killings going all the way back to the 1970s to show how ingrained the department’s culture is. In the last 50 years, there have been only three indictments and two convictions of on-duty Dallas police officers involved in fatal shootings, according to the ACLU report, to which Fullinwider contributed.

“Policing has changed a lot, but this response, this encounter between a white officer and a young Black or Brown man, hasn’t changed that much and the reform-minded chiefs haven’t succeeded in changing it,” Fullinwider says.

This summer as protests sprung up across the country in response to the killing of George Floyd by a Minneapolis police officer, Dallas saw its own protests and the police department’s response was often violent and controversial.

In early June, a group of more than 500 protesters were trapped on a bridge, tear-gassed and detained in a mass arrest. After the police “kettling” on the Margaret Hunt Hill Bridge in downtown Dallas, police leadership told the city council tear gas wasn’t used — a statement that was contradicted by the department’s own after-action report of the incident released months later.

That report details a number of problems in Dallas Police leadership that were exposed during the early days of the protest movement.

As the commander of an outlying district, Aziz is not mentioned in the after-action report and would not have been in charge as the tear gas was deployed on the bridge. But if he were to get the job in Milwaukee, he’d take over a department that was caught lying about protesters throwing Molotov cocktails.

Members of the Dallas activist community say they get along well with Aziz and even supported him when he was a candidate for chief.

“We’ve agreed, we’ve disagreed but I think he has the ability to bridge the gap between community and law enforcement,” says Dominique Alexander, president of Next Generation Action Network — the group that organized the protest that was tear-gassed on the bridge. “He can bring a set of progressive values that the people of Milwaukee, especially people of color can appreciate.”

“He was actually my choice to be next police chief,” Higgins says. “I like him because I’ve known him in the community, had a lot of meaningful conversations with him around police reform. Because he was from here, from the community, I knew he understood some of the challenges.”

“I think Malik is a community-minded guy,” Higgins continues. “He isn’t afraid to have hard conversations and listen to the community’s concerns.”

Being a police chief involves more than just gaining the support of activists though. A chief needs to win over a whole community with wide-ranging ideas over how the department should work, the rank-and-file patrol officers, the police union and the city leadership.

In Dallas, the police department’s internal politics are dominated by three separate unions — one for white officers, one for Black officers and one for Latinx officers, Fullinwider says.

Dallas is also a diverse community that includes wealthier, more conservative community members who are afraid of crime and the communities of color that deal with realities of police violence and over-policing.

“A chief nowadays has to be able to navigate two publics,” Fullinwider says. “One is the overpoliced, racially profiled, brutalized public and the people of conscience that support them. They want everything from police reform to no police. That’s a good portion of the population. Then you have people who the only complaint they have about police is they want them to come faster. A police chief has to be able to respond to both.”

Milwaukee, its police department and city government have their own complicated internal politics, but Dallas activists say Aziz could navigate them.

“Every chief of police coming into another city has a learning curve, understanding the dynamics, the culture, the political culture,” Alexander says. “[Aziz] has the ability to navigate. I think Milwaukee would get a nice chief.”

Aziz did not respond to a request for an interview. 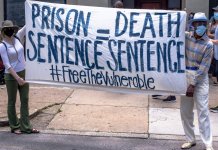 Locked up during the Waupun COVID surge 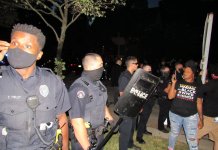 Disbanding the Wauwatosa Police Department is a logical solution