As the Biden administration takes power in Washington, D.C., Wisconsin’s Lt. Gov. Mandela Barnes sees hope for communities in Wisconsin and elsewhere that have suffered from climate-related flooding and natural disasters.

Speaking at a Jan. 21 virtual meeting alongside climate resilience officials from Rhode Island and New Jersey, Barnes said he believes that a new era of climate policy is beginning. Hosted by Pew Charitable Trusts, the event was titled “Flood Resilience in the Year Ahead: State Innovation and Opportunities.”

Barnes has been paying attention to the consequences of the climate crisis in his statewide role, in addition to developing national credibility on the topic. “As I’ve traveled across our state,” Barnes said, “I’ve had a chance to witness firsthand how the climate crisis has taken a devastating toll on people’s lives. We’ve seen illness that’s caused by air pollution. Loss of life and livelihood from extreme weather events. And also the economic toll that it takes on our farming communities, our tourism industry and our infrastructure.”

The actions President Joe Biden took on his first day in office included signing a letter to the United Nations announcing intent to rejoin the Paris Agreement on Climate Change. Leaving the international pact was a recurring campaign promise for Donald Trump. Following that decision, scores of cities, townships and state governments made their own pledges to the accords. Under the US Climate Alliance, local municipalities sought to move toward renewable energy policies.

However, those commitments proved fragile as the the Trump administration purged environmentalists and scientists from federal agencies and even struck the very words “climate change” from government websites and news releases.

As 2020 came to an end, Wisconsin’s state-level climate change task force, chaired by Barnes, released the Governor’s Task Force on Climate Change Report, a comprehensive look at the challenges facing Wisconsin that Gov. Tony Evers had tapped him to lead. One of the task force’s specific recommendations is the creation of a “flood-resilience plan with a focus on urban and rural-specific watershed action.”

Worsening floods are not only affecting rural farming communities; they also have an impact on urban neighborhoods, which bear the brunt of their cities’ flooding. One example is the 30th street corridor in Milwaukee, which is in a low-income Black and brown neighborhood. In July of 2010, more than eight inches of rain fell in the neighborhood in a single rain event. In just one days time, the flooding caused $32 million in damage.

The report also notes that, “increased precipitation is leading to an increased flooding and storm surge, which impact communities and industries along the Mississippi River and the Great Lakes as well as tourism along Wisconsin’s waterways and beach fronts.”

The report confirms that the Badger State’s weather patterns are becoming more humid, and wetter over time, and that these trends have a disproportionate effect on Black, brown and low-income communities as well as rural communities that depend on agriculture. “These broader increases in precipitation and warming are likely to drive more extreme weather events such as floods and heatwaves, which will affect Wisconsin’s communities and industries in unequal ways,” the report reads.

The report notes that Native American communities face particular risk: “Indigenous peoples of North America are disproportionately vulnerable to climate change. The most vulnerable industries, settlements, and societies are generally those in coastal and river flood plains; those whose economies are closely linked with climate-sensitive resources; and those in areas prone to extreme weather events,” the report reads.

Although Barnes says the Republican-dominated Legislature has not supported the efforts, the Evers administration has prioritized addressing climate change. The governor wants Wisconsin to transition to clean energy by 2050, and the formation of the task force with Barnes at the helm signaled a serious intent to tackle the issue.

Barnes noted during the Pew event that, “Our process, while cumbersome at times, gave us the best opportunity to put a document forward which truly represented a broad swath of people across our state, that has some sort of tie into how we address climate change.”

“Our legislature has been a challenge, to say the least, for the first two years,” Barnes told the group. “That’s why we were sure to bring together a coalition of people who didn’t always agree. Many times, these were organizations and individuals that have been at odds with each other before. But the thing about is that they had not been in the same room to have those conversations. So we wanted to be able to create that space, to facilitate that much needed dialogue. And it wasn’t easy.”

Barnes believes addressing the challenges of the climate crisis requires unity across historical divides. He says the strength of the task force came from its varied stakeholders, which included representatives of the private sector, environmental groups and Native American communities.

By the end of the process, all the members were able to agree to the report’s 55 recommendations. “That is what made it so much more impactful,” said Barnes. “They weren’t the same people talking about the same things that we all have become used to throughout the years.”

Barnes adds that the Biden administration can assist Wisconsin in tackling its climate plan by providing “flexible funding” so that municipalities can respond to the particular issues in their communities. “We want to be helpful,” Barnes said, “but at the same time we’re talking about the people who’ve been on the ground, who’ve been doing this work, and understand the unique elements that exist in each pocket in our state.” 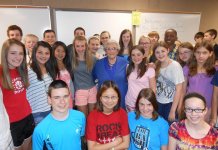