WASHINGTON—President Joe Biden is set to sign a host of executive orders on climate Wednesday that will put a hold on new oil and gas leases on federal property, place environmental justice in the center of climate reform and set goals of conserving nearly a third of the nation’s land and water.

On the leases, likely to be among the most contentious climate actions by the new administration, the secretary of Interior would be directed to pause all new oil and natural gas leases on public lands and offshore waters and initiate a review of all leases and permits related to fossil fuel.

The review will then identify measures that can be taken to “double renewable energy production from offshore wind by 2030,” according to an administration fact sheet. The order does not ban new leases on coal.

But some environmental groups argue that the executive order to pause new leases doesn’t go far enough to curb greenhouse gases. Mitch Jones, the climate and energy program director at the non-profit advocacy group Food & Water Watch, said the order should levy a permanent ban on not only new leases for gas and oil but also for lease permit renewals.

“While there is a pause on new leases, drilling is still going to be taking place,” said Jones. “That’s not going to make much of a dent in greenhouse gases.”

Some states with new oil and gas leases on federal lands from fiscal 2019 include Wyoming with 1,049, Montana with 124, Nevada with 105 and Colorado with 62, according to data from the Bureau of Land Management.

Change of direction on climate

The executive orders are among a slew rolled out by Biden in the week since he’s taken office and are aimed at a reset for the role of climate change in federal policy.

“President Biden set ambitious goals that will ensure America and the world can meet the urgent demands of the climate crisis, while empowering American workers and businesses to lead a clean energy revolution that achieves a carbon pollution-free power sector by 2035 and puts the United States on an irreversible path to a net-zero economy by 2050,” according to the White House fact sheet.

The White House did not provide details on how much funding will be allocated to these climate initiatives, or announce those in charge or establish a timeline for these goals.

Within his first week in office, Biden rejoined the Paris Climate Agreement, which is a global pact with countries to tackle climate change.

One of the executive orders commits that Biden will host a Leaders’ Climate Summit on Earth Day—April 22.

The order also creates a new position, the Special Presidential Envoy for Climate, a job that Biden has tapped former U.S. Sen. John Kerry to fill. It will be a part of the National Security Council. The order is expected to say that “it will be a U.S. priority to press for enhanced climate ambition and integration of climate considerations across a wide range of international fora.”

The order also creates the National Climate Task Force, where the leaders of 21 federal agencies will work together to address climate change. Biden and his Cabinet have previously stated their commitments to include climate change in their policy initiatives, from transportation to agriculture.

“The last four years have been a feeding frenzy on our public lands and waters, and this moratorium is the right way to start our overdue transition to a more sustainable economy,” he said in a statement.

Grivalja said that the committee is considering several bills that would tackle climate change, such as achieving net-zero greenhouse gas emissions by 2040 with the American Public Lands and Waters Climate Solution Act and protecting 30 percent of oceans by 2030 with  the Ocean-Based Climate Solutions Act.

The secretary of Interior, if confirmed by the Senate, would be Rep. Deb Haaland (D-N.M.).

Haaland, who is a member of the Laguna Pueblo tribe, would be the first Indigenous person to run the Department of Interior. Many Indigenous communities are affected by oil and gas leases, a study by the University of California, Los Angeles found.

In New Mexico alone, 91 percent of leases are on public lands, which are often concentrated around Navajo communities. Living near these sites exposed Indigenous tribes to pollutants, which can cause chronic health problems.

The executive order also reduces fossil fuel subsidies, in which the government gives the fossil fuel industry tax breaks for the production of domestic energy, and instead directs federal agencies to find new opportunities to use clean energy infrastructure and technologies.

Most of those subsidies are legislated by Congress, so it’s not clear which tax breaks will be stripped in this executive order.

The burning of fossil fuels in 2016 contributed to 76 percent of greenhouse gas emissions, which get trapped in the atmosphere and cause the planet to reach high temperatures, according to the U.S. Energy Information Administration.

Biden also signed an executive order that establishes councils to focus on environmental justice and address the disproportionate impact of pollution on communities of color.

A report from the NAACP and the Clean Air Task Force, an environmental group that pushes for the use of technology to combat climate change, found that 75 percent of Black people are more likely to live next to industrial facilities.

“It’s a very welcoming sign that communities of color, that have been ravaged from COVID because of the legacy pollution, our needs are being elevated to a national level, finally” she said.

The last executive order to address environmental justice in communities of color was in 1994, during the Clinton administration.

She said it’s also important for Biden to include environmental justice leaders in his administration.

“There are people with that lens for equity and race that also need to be a part of this administration,” she said. 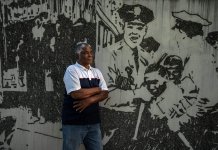