Why did Wauwatosa PD want the phone of Alvin Cole’s sister?

A line of officers in riot and militarized gear block a street in Wauwatosa during the October curfew. Tear gas was still thick in the air. (Photo by Isiah Holmes)

On Oct. 8, 2020, family members of Alvin Cole joined the dozens who marched for justice in the streets of Wauwatosa. Protests flooded the suburb for months, as the 17-year-old had been the third person killed by former Wauwatosa officer Joseph Mensah. Cole’s mother Tracy, and older sister Taleavia, became central figures in the local movement.

It was the second straight day demonstrators defied a curfew, declared after no charges were brought against Mensah the prior day. Cole’s family also took their chances against the militarized crackdown, documented previously in the Wisconsin Examiner.

Later that night, Tracy Cole would be hospitalized after sustaining injuries during her arrest by Wauwatosa officers. Taleavia was briefly jailed, and her cell phone confiscated for evidence. It was just one of several phones seized by officers during those tense and chaotic nights. The question of why police wanted the devices continues to haunt many of those who defied Wauwatosa’s curfew.

The Wauwatosa Police Department (WPD) did not return Taleavia Cole’s phone for more than 20 days. Internal emails obtained by Wisconsin Examiner, however, paint a picture of what happened to the phones during their stay at WPD. The messages were sent between detectives and members of the department’s Special Operations Group (SOG), which conducts cell phone data extraction operations. 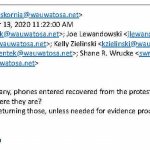 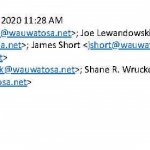 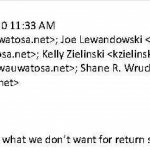 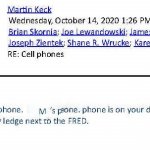 WPD, working alongside a US Marshals task force, arrested Taleavia and her mother, and seized the phone on Oct. 8. “I was trying to reach for my phone ’cause I just saw a lot of cops coming towards my car,” she recalls. “And they just started spiking our cars, so there’s literally no way out.”

Erik Fanning, a Wauwatosa resident who was in a caravan of cars participating in the protest, also describes the situation, saying officers, “had us kettled in, to where we were just stuck. And we couldn’t move the cars any which way.”

Moments later, Cole noticed an officer was approaching already near her car. “Cop comes to my car,” she says, “tries to bust out my windows and then opens my door and puts a gun to my head.”

As she was pinned to the ground, Taleavia heard her mother’s screams as her own arrest played out feet away. Five days later, WPD detectives emailed one another about the captured phones.

“There are not that many, if any, phones recovered from the protesters entered into property,” a supervisor in the Wauwatosa Police Department (WPD) said in an email to the department’s Special Operations Group (SOG). “We will need to start returning those, unless needed for evidence processing.” SOG Detective and cell data extraction specialist Martin Keck would reply, “they are in the nerd lab.”

What happens in the ‘Nerd Lab’?

Taleavia and others were taken to the Waukesha County jail, while their phones were transported back to Wauwatosa. WPD spokesperson Sgt. Abby Pavlik told Wisconsin Examiner that certain people’s phones were sought because they, “may have had potential electronic evidence.” Eight days later, the phones would find themselves in the Computer Forensics Unit, or what Keck called “the nerd lab.”

On Oct. 14, Keck sent an email to fellow SOG detective Joseph Lewandowski, and others. “Lt. [Shane] Wrucke took Taleavia’s phone,” he wrote, noting that another was on Lewandowski’s desk while the rest were in a separate bag. Lewandowski is also connected to an investigative PowerPoint presentation which labeled Mayor Dennis McBride as a “higher value target” for WPD.

WPD reports indicate that phones were taken on Oct. 8, and Oct. 9, when curfew enforcement was most aggressive. These phones were returned to their owners between Oct. 15-19, 2020.

The police, however, made an exception for Taleavia’s phone. It remains unclear why Cole’s phone was segregated from the rest. According to WPD’s annual reports, in 2019 Lt. Shane Wrucke was the sergeant leading the SOG.

In interviews with Wisconsin Examiner, several protesters described attempts to retrieve their phones, only to be told by WPD that they were seeking warrants to access them. When the phones finally did return, many were set on “airplane mode” despite the owners not having left the phones on that setting. Other activists arrested during the curfew report that officers told them their phones were being kept for “data mining.”

Asked to comment, Pavlik says “it is standard practice to put phones in airplane mode for potential phone analysis. It also helps conserve the phone’s battery life.” She also insists that the department did not analyze the phones.

Some of Keck’s emails, unrelated to the protests, reveal that he could also acquire information from a phone’s SIM card. This seems distinctly different from extracting data through something like Cellebrite, used to download cell data. As a unit, SOG uses covert surveillance and cell data recovery to investigate armed robberies and other high-profile crimes. The unit also targeted its surveillance efforts toward protesters over the months of marches in Wauwatosa. 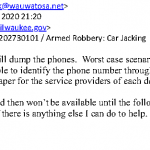 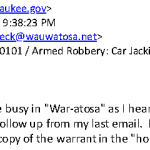 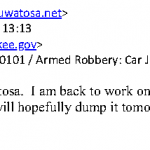 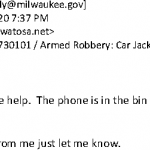 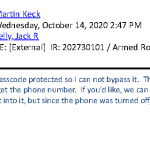 Sgt. Pavlik would not directly answer whether Cole’s SIM card, or those belonging to other protesters, were removed by SOG. She simply reiterated, “Taleavia’s phone was not analyzed, nor were any other phones taken during that time. All phones were returned in the same condition in which they were taken.”

Taleavia Cole’s phone was not returned until Oct. 30, when her family’s lawyer Kimberley Motley filed motions in Milwaukee County Circuit Court to order it returned.

While Cole’s phone was in WPD’s possession, according to court filings, her Instagram and Facebook accounts disappeared. Additionally, Motley noted in the filings, “[Taleavia’s] iCloud account which has updated photos, many attorney-client privileged documents and other pertinent information to which she has never consented to a search has been tampered with.” The attorney has heard similar reports of photos and other information missing from the phones of protesters who had their phones confiscated.

The emails concerning the phones date from Oct. 13-14, 2020. Motley called WPD between Oct. 9-15, and again on Oct. 29, to retrieve Taleavia’s phone. In one of the filings she writes that she “asked the WPD to produce a search warrant for the phone and/or probable cause to keep the phone, both of which the WPD did not produce.”

On Oct. 16, Motley filed the motion to order the phone returned, which did not happen until Oct. 30. No explanation was given as to why the department held onto Cole’s phone for 22 days.

The Coles were awarded $300, the maximum amount allowed in this sort of civil case arguing unlawful seizure.

Cole says she is not alone in wondering why police would take such a keen interest in her phone in October. “Even the FBI said, ‘why did they take your phone?’ Maybe because I’m the sister of Alvin Cole? Everything’s in my phone.”

Motley later took Cole’s phone to be analyzed by a lab to shed light on what happened to the phone while it was in the forensics lab. Although she’s unable to provide many details at this time, Motley calls the results, “very disturbing. And we’re going to continue to investigate the matter.”

Lee Schuchart, an attorney who has dealt with cases involving cell data extraction, also reviewed Keck’s emails. “It is disturbing [that] law enforcement apparently seized everyone’s phone. I would look further into this issue, as police need a legal justification to seize property,” he says. “If a court already ruled the seizures were unconstitutional, that raises huge red flags. I am curious how many people had their rights violated that night. The Fourth Amendment does not evaporate because people exercise their First Amendment right to protest.”

WPD began gathering intelligence on protesters from the beginning. A list of at least 40 protesters and “protest folder” existed even before the officer who shot Alvin Cole was suspended.

The department monitored Facebook live feeds, and drafted warrants for social media groups used by the protesters. After one person was arrested on Aug. 14, an entire section of the incident report was dedicated to the marcher’s confiscated phone.

Percy Hayes, a protester who was arrested in late September during a small peaceful march, says Keck told him that he was the detective who “actually cracks our cell phones.” WPD reports released via open records requests indicate he did interview Hayes, but don’t mention some of the comments he described. Wisconsin Examiner has requested the video of this interrogation.

Motley compares these tactics to those employed by the FBI’s Counter-Intelligence Program (COINTEL PRO) against leaders of the civil rights movement. “It’s shockingly similar to how the FBI and CIA targeted Black activists in the civil rights 1960s movement,” Motley tells Wisconsin Examiner. “It’s a pathetic playbook which has been used over, and over again.” The list of protesters, as well as the targeting of Mayor McBride and other elected officials by WPD, only increases her concerns about the department’s tactics.

Although Motley has particular concerns about SOG, she holds Chief Barry Weber as ultimately responsible. Weber was cc’d in the protester list emails, and has singled out local elected officials. The same day McBride’s PowerPoint, which also mentions Motley, was emailed by Detective Lewandowski, Weber wrote a letter requesting that she be professionally disciplined. Motley has demanded Weber to be fired for running WPD, “like a private security force.”

Motley, referring to the SOG team, went on to warn of the officers’ behavior: “It shows a gross and disgusting over-reach of their powers as, basically police officers with this pretend label that they’ve given themselves.”

“When I took this case, it was a tragic situation to uncover what actually happened as it relates to the death of Alvin Cole,” says Motley.  “And, unintentionally, I have been thrown down this rabbit hole of nonsense, and corruption, and outright ignorance of the law… It has to stop. They have to be accountable for their actions.”

Why did Wauwatosa PD want the phone of Alvin Cole’s sister?