Less than half of Wisconsin law enforcement agencies equip officers with both body and dashboard cameras, according to survey data from the Wisconsin Department of Justice (DOJ). Of the agencies that responded to the survey, nearly a quarter use only dash cams and 12% don’t use cameras at all.

When mapped, the data reveals large swaths of the state in which no police interactions are recorded or pockets where the difference between having video evidence of police misconduct or not, is simply crossing a county line.

Cameras aren’t a panacea against all police misconduct, but they can show evidence of that misconduct and lead to punishment. Body cameras more than dash cams because police can’t take their squad cars everywhere they conduct business.

A lack of body camera video was cited as an important factor in the decisions by the district attorneys in Milwaukee and Kenosha counties to not file charges against police officers in recent high-profile police shootings.

On the flip side, body and dash cam video is often used by prosecutors as evidence in criminal  proceedings.

According to the DOJ survey, which was unanswered by more than 100 agencies, the biggest barrier to universal camera use is the cost of implementation. However, it’s not the case that the largest agencies with the biggest budgets all use cameras while the smallest agencies go without.

To wit: The Waukesha County Sheriff’s Office, patrolling the state’s third largest county with a budget of more than $40 million, does not use cameras of any kind — and just hired former Wauwatosa police officer Joseph Mensah, despite his history of fatally shooting three people of color.

The Village of Iron Ridge Police Department, in Dodge County, has a budget of less than $100,000 — yet equips its officers with both types of cameras.

Waukesha County is in the minority of sheriff’s departments across the state, one of just 11 others that don’t use cameras of any kind. Both types of cameras are used by 28 of the 72 offices , 24 use only dash cams and eight use only body cams. Though most of the camera-less sheriff’s departments are in more sparsely populated counties in northern parts of the state, Waukesha is joined by Washington County as the only other southern Wisconsin sheriff’s department that doesn’t use any video devices, according to the survey data.

In most other large departments, some type of recording equipment is used. The Dane County Sheriff’s Office uses dash cams while the Milwaukee County Sheriff uses both. The Madison and Milwaukee Police Departments use both.

The mapped data shows that in most parts of the state — while travelling municipality to municipality and county to county will result in some changes — police largely use some form of video. But, in the state’s northeast corner, there’s a large strip in which no agencies use cameras of any kind.

Seven agencies across Oconto and Marinette counties don’t use body or dash cams, leaving police interactions across the north side of the Green Bay unrecorded.

The camera data, while extensive, is still incomplete because more than 100 of the state’s law enforcement agencies did not respond to the DOJ survey. 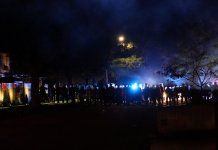 Where in Wisconsin are police interactions on video?