WASHINGTON — Joycelyn Fish drove through several feet of snow that blanketed Wisconsin one February night so she could get to a nationally televised town hall and question President Joe Biden about the crush of student debt.

The blunt reply she got from Biden — that he wouldn’t take action to eliminate $50,000 in debt per student borrower — surprised Fish, made headlines and trained attention anew on people struggling under student loan burdens in the economic downturn. A Wisconsin expert on debt says a racial divide is apparent as well.

“There is a lot of discussion around student loans,” Fish, of Racine, told the Wisconsin Examiner in a recent interview. “It really has put a fire under a lot of people to hopefully tell their stories as well as how the student loan debt is impacting them overall.”

Biden at the Milwaukee town hall did say he’d be comfortable with Congress approving $10,000 in forgiveness per borrower, and in executive action has continued a Trump administration pause on student loan payments. The Department of Education also has announced the full cancellation of debt for 72,000 students who attended institutions that engaged in misconduct, amounting to $1 billion.

The sweeping pandemic relief plan passed by Congress and signed into law by Biden makes any loan cancellation tax-free, too.

But the president so far has resisted calls from some other Democrats to go any further in executive action, including the Democratic leader of the U.S. Senate.

“It’s time to act. We will keep fighting,” Senate Majority Leader Chuck Schumer and Massachusetts Sen. Elizabeth Warren said in a joint statement the day after the town hall, advocating for Biden to cancel up to $50,000 in student debt.

Warren made student loans a major issue in her unsuccessful campaign for the 2020 presidential nomination, and since then has joined with other Democrats like Schumer in pushing for wiping out debt.

Progressives in the House are pressing as well.

“The case against student loan forgiveness is looking shakier by the day,” Rep. Alexandria Ocasio-Cortez, D-N.Y., tweeted after Biden’s comments. “We’ve got the *Senate Majority Leader* on board to forgive $50k. Biden’s holding back, but many of the arguments against it just don’t hold water on close inspection. We can and should do it. Keep pushing!”

Fish, who works at a nonprofit community theater, considers herself an active participant in democracy. She’s voted in every local, state and federal election since she was 18, so when she heard about a town hall televised by CNN where participants would get the opportunity to quiz Biden, the 29-year-old jumped at the opportunity.

She originally wanted to ask about economic relief for the arts, as well as about the recent wave of Republican legislative bills trying to impose new requirements on voting.

But as she thought about her question, she was reminded of her family and friends who were struggling under the weight of student loans, as well as her own debt.

The Federal Reserve estimates that the total student loan debt in the country is more than $1.7 trillion, with an average of $32,731 of debt per borrower.

In Wisconsin alone, 714,700 people carry $22.7 billion in student loan debt, or an average of $31,706 per borrower, according to the Student Success Through Applied Research Lab, which partners with the University of Wisconsin-Madison’s Division of Enrollment Management.

Some Democrats say loan cancellation is a matter of social justice, among other things. “An ocean of student loan debt is holding back 43 million borrowers and disproportionately weighing down Black and Brown Americans,” Schumer and Warren said in their statement following the town hall.

“Cancelling $50,000 in federal student loan debt will help close the racial wealth gap, benefit the 40% of borrowers who do not have a college degree, and help stimulate the economy,” they continued.

Schumer contends that the administration on its own can act to forgive debt, rather than waiting for congressional action—which is probably difficult, given the 50-50 split in the Senate.

“I believe the current administration has the legal authority to forgive up to $50,000 in federal student loan debt—a life-changing policy decision that would boost our economy and help close the racial wealth gap,” Schumer said on the Senate floor while discussing the tax provision in the relief bill.

During the Feb. 16 town hall, Fish asked the president if he would support eliminating $50,000 in student debt.

“We need student loan forgiveness beyond the potential $10,000 your administration has proposed,” she told Biden.  “We need at least a $50,000 minimum. What will you do to make that happen?”

“I will not make that happen,” Biden said.

He went on to explain his answer, arguing that he didn’t want to write off $50,000 for those who went to Ivy League schools. He said he’s proposed plans for free tuition for community colleges, and said that families with a household income of under $125,000 should be able to send their kids to public universities for free.

Biden also proposed government forgiveness programs, such as allowing a student borrower to write off some debt after volunteering for several years.

Fish said she was surprised by his response.

“Yes, $10,000 dollars would make a dent for a lot of people,” she told the Examiner. “It probably would cover some people’s entire student loan package, but really when you are looking at the statistics of student loans and where people (are) at in their payments and how much they’ve had to forbear or defer, or the interest has increased over the years, the $50,000 is going to make a much broader impact.”

Audrey Peek, the assistant director of the SSTAR Lab, said that sometimes making broad policy decisions, such as wiping out student debt across the board, can’t be as effective because student debt can vary by race, ethnicity and degree completion.

“We’re seeing in the data that race-neutral policies are not going to fix the deeply unequal racial divide in student loan debt and in the racial wealth gap, which is one of the reasons that people are interested in student debt cancellation,” Peek said.

Peek also added that it’s important to understand why students must take out loans.

“We have a trend in the United States, not only in rising tuition, which has been well covered in the media, but rising non-tuition expenses, things like housing, car payments, child care,” she said. “Those are all expenses that students need to manage while they’re in college.”

The cost of living is also higher, she added.

“At the same time, median family income has not been rising, there are constrained family budgets across the country that have also led to increasing reliance on student loans, and that’s especially true for families of color,” Peek said. “Another reason that students borrow is that grants, another source of financial aid that many students rely on, have lost their purchasing power over time.”

Over the years, funding for federal Pell Grants has decreased to a point where grants cover about 29% of the average costs of tuition and fees, room and board at public colleges, compared to covering 79% of costs in 1975. Pell Grants are awarded to students based on family income.

Peek added that there are very few borrowers who have more than $100,000 in student loans, about 5% of all borrowers.

“The people who tend to have the most difficulty with repaying the debt are people who experience labor market discrimination, so people of color and people who don’t get a degree,” she said.

“So you have this debt, and no degree to show for it and thus repaying the debt becomes really hard.”

Fish pointed out that relieving student debt now will help alleviate stress for borrowers when student loan payments start to resume as the pandemic winds down.

“To have to come back right away and start repayments on some of these (loans) is going to absolutely destroy a lot of people’s savings, if they have savings still,” she said. 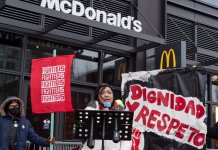 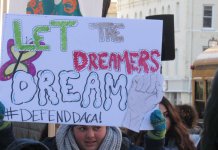 This Racine voter asked Biden to cancel student debt. She’s not giving up.